The Shards of Heaven 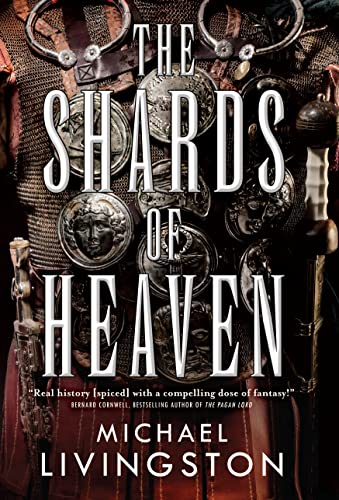 “sure to appeal to fans of both history and fantasy.”

Julius Caesar’s assassination in the Roman Senate sparks a war that threatens to tear the Empire in two. Octavian, Caesar’s great-nephew and adopted son, begins a war with Marc Antony and Cleopatra for control of the Roman Empire.

Better known to history as Caesar Augustus, Octavian’s ambition is his strongest personality trait although he hides it well. “if Octavian thought himself rightful heir to at least part of that world . . . well, no price would be too high to see the boy dead.” The boy in question is Caesarion, heir to both Egypt and the Roman Empire by virtue of being the natural son of Julius Caesar and Cleopatra, not that such technicalities matter when an empire is at stake.

Cleopatra returns to Egypt, to the city of Alexandria, with her son and Marc Antony. In the intervening years between Cleopatra’s return and Octavian’s decision to go to war, another adopted son of Julius Caesar’s makes a momentous discovery that will aid Octavian to defeat Marc Antony and “his Egyptian whore.” Juba, Numidian prince, gains possession of one of the Shards of Heaven, artifacts cast away by the gods—or perhaps the One God of the Hebrews.

After torturing a priest of Astarte, Juba gains control of the Trident of Poseidon, or Neptune, depending on whether one uses the Greek or Roman name for the God of the Sea. Juba gains more than the Trident; he learns that his true father, King of Numidia, chose death rather than a humiliating end at the hands of Julius Caesar. In a quest for revenge against Rome, Juba will seek out an even greater Shard of Heaven: the Ark of the Hebrew God. Information as to the whereabouts of the Ark is to be found in the Scrolls of Thoth, which were in the Great Library in Alexandria, or so Juba believes.

If the search for the Scrolls of Thoth, and the eventual discovery of the Ark which Juba will use, along with the Trident, to destroy Rome, The Shards of Heaven would be a straightforward story. It is not. When Juba returns to Rome he meets with his adopted stepbrother, Octavian. He mentions nothing of the Trident. “He just needs Octavian’s trust.” Then in the chaos of war with Marc Antony, Juba will use the Trident to destroy Rome.

Again the story is not so simple. Octavian takes control of the Trident, and only gives it to Juba when there is need of its power to control the seas. Octavian either does not dare to use the Trident himself, or else lacks Juba’s gift for calling forth and controlling its deadly power. Juba tells Octavian that the Trident is more than Poseidon’s tool. “It’s also Mercury’s wand. And Moses’ staff. And Nehushtan. And perhaps even more than that.”

Juba now believes that all the gods of Greece and Rome and Egypt are just faces of the God of the Hebrews. “So these stories of Moses are stories of Neptune by another name?” Octavian asks Juba. That is what Juba now believes, but he is still careful not to mention the Ark.

While Juba practices using the Trident and advising Octavian on strategy for the coming war, Antony, Cleopatra, and her son Caesarion receive a messenger with the news that Octavia is sailing from Rome to Greece. War is inevitable. Marc Antony asks “Why now?” Cleopatra finds it a foolish question. She knows the answer although she does not say it aloud. “Because Octavian thought he could win. He thought he had the advantage.”

Cleopatra has no idea the advantage that Octavian has, and neither does Marc Antony. The Trident of Poseidon is about to assure Octavian’s victory and the total defeat of Antony and Cleopatra. Their suicides leaves Caesarion and his half-siblings at risk of death with only a pair of Roman legionnaires and an old librarian, with a little help from Caesarion’s half-sister, Selene, to ensure his escape from Alexandria and from an obsessed Juba.

The two most likeable characters are Caesarion and Selene. A strong willed young girl just younger than her brother, she insists on knowing the worst the children of Cleopatra will face. Caesarion, not yet a man, but one who must assume the responsibilities and hardships of one, is a sensible boy who knows that his throne is lost and that Octavian will kill him. He learns of the Scrolls of Thoth. “If it does indeed exist, if it’s here in Alexandria, we must find it before him.”

Caesarion does not intend to use the Scrolls even to save Egypt. “The only thing I think I could do,” the boy-king said. “Destroy it. We’re not meant to know the mind of the gods.”

The Shards of Heaven by Michael Livingston blends history, fantasy, Greek and Roman mythology, and Judeo-Christian religion to create a magical background for a novel sure to appeal to fans of both history and fantasy. While the author provides a guidebook to ancient Alexandria and the Great Library for which it is famous, one would wish for a greater sense of actually experiencing the sights, sounds, and smells of the city that do so much to transport the reader into a fictional reality.