The Shape of Inner Space: String Theory and the Geometry of the Universe's Hidden Dimensions by Shing-Tung Yau (2010-09-07) 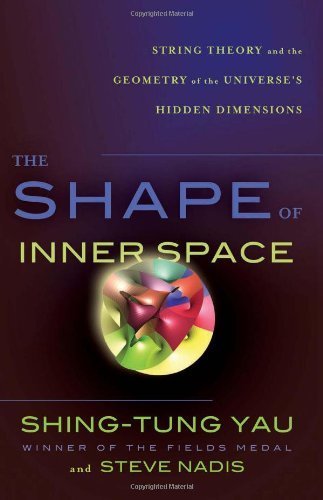 Shing-Tung Yau is a winner of the prestigious Fields Medal in math (those who are not mathematicians may have seen the movie Good Will Hunting). The co-author, Steve Nadis, is a very capable popular science writer who puts Yau’s efforts into history’s perspective.

To be concise, @font-face { font-family: "Calibri"; }@font-face { font-family: "Cambria"; }p.MsoNormal, li.MsoNormal, div.MsoNormal { margin: 0in 0in 0.0001pt; font-size: 12pt; font-family: "Times New Roman"; }div.Section1 { page: Section1; }The Shape of Inner Space is about understanding the universe through geometry. And just to be forewarned, any book that takes an incredibly complex problem and attempts to make it understandable to the average reader has an insurmountably difficult task. Despite the simplifications needed to write this popularization of String Theory, this book remains in many parts, a difficult read. But despite that, this book is well worth the effort. The Shape of Inner Space provides opportunity to look over the shoulder of a giant in mathematics, which to this reviewer is like catnip to a cat. If it lacks anything, the book could have used more diagrams to go with the descriptions.

The Shape of Inner Space begins with the mysteries of the cosmos. There’s more universe than we can see, 13.7 light years across called the Hubble volume. If space is curved, then there may be more volumes in space than we can detect. Within the Hubble volume, there is also more material than we can detect through the gravitational effect. The unseen matter is called dark matter and force, dark energy, but more than this, of dark matter we know nothing. There also may be more dimensions than the three we know (point, line, space) plus time, the fourth. But just what is a dimension?

But do the higher dimensions have a physical representation that can be drawn?

Yau calls mathematicians who study geometry, geometers and topologists. Which leads to the question: How are geometry and topology related? Geometry is to local shape as topology is to global shape. To a topologist any 2D surface without a hole can be represented by a sphere, including a pyramid because through mathematics these shapes can be mathematically morphed into each other. Any 2D object with one hole can be represented by a donut (technically called a torus), including a coffee cup. A glass, a sphere, and a pyramid are the same, topologically speaking.

The authors give a short biography of other geometers that advance the field of mathematics and topology, concept by concept. Pythagoras created the first documented proof in all mathematics, laying the groundwork for creating mathematical proof. Euclid then laid the groundwork not just for geometry, but for all mathematics. Rene Descartes created a way to measure space, called the Cartesian coordinate system. Newton and Leibniz created calculus, which paved the way for Gauss to show that space itself can be curved.

In the 1850s Reimann realized that space was not limited in terms of numbers of dimensions. Riemann then provided a way to measure a curved space by use of the metric tensor, and space could now be measured without an outside reference. Einstein used metric tensors in his general Theory of Relativity to show that “Gravity is geometry.” In 1919 Kaluza took Einstein’s four dimensions and added a fifth in an attempt to tie in gravity with electromagnetism in a single unified space. The Kaluza-Klein theory claimed that this fifth dimension was very, very small, about 10e-30 cm in circumference, and although this theory eventually was proved wrong it opened the door to adding dimensions beyond the 4th to solve physics problems.

The slogan that geometers embrace is “Curvature governs topology,” and the tools that geometers use to go from curve to topology are nonlinear differential equations. Nonlinear differential equations go back to Euler, and geometric analysis using Diffy-Q’s follows in Euler’s footsteps. Yau’s twist in this began in the 1970s; instead of extracting nonlinear equations from geometric examples, he wanted to use those equations to solve intractable problems in geometry.

2D topologies have been understood for centuries. 4D, a shape that changes over time is harder to visualize or to describe mathematically. Yau’s work began with a simple question, called the “Calabi conjecture:” Given a geometric rule, how many and what variety of shapes can conform to that rule? The solution to this question is the equivalent of attempting to pump up a deflated basketball by only use of mathematics!

The Calabi conjecture problem as a class is called geometric flow, which is used to identify minimal surfaces, the least area shape that corresponds to the lowest energy state. A minimal surface may be seen in real life, in the shape a soap film makes when a bent wire is extracted from soapy water. The soap film formed will always be a minimal surface. For some closed curves there may be more than one minimal surface. Plateau did this pioneering work in the 1700s, called the “Plateau problem,” which wasn’t solved until 1930 by Douglas and Rado. The solution, however, was not complete. Not all minimal surfaces are as simple as a soap film, and Meeks and Yau solved the problem for more complicated shapes.

The Calabi conjecture, “Given a geometric rule, how many and what variety of shapes can conform to that rule?” also has a physics question hidden it, “Can the curvature of space make gravity without matter possible?” The physics problem is, if gravity comes from mass telling space how to curve, then what happens in a space that has no mass whatsoever and extremely high curvature? This question is yet to be answered but in Yau’s opinion the solution has nothing to do with physics, or more specifically has nothing to do with Einstein’s Theory of Relativity, and everything to do with geometry. The value of solving the Calabi conjecture would solve a large class of problems of all spaces and topologies meeting certain constraints. And for solving this, Yau became famous.

The explanation that Yau gives of his effort begins simply but quickly pushes into complexity in the telling. Beginning again describing topologies and dimensions, Yau explains that complex manifolds are expressed in terms of complex numbers. A complex number is actually a number pair, the first number being real, the second containing the square root of minus one. Riemann surfaces are complex manifolds with certain properties, one of which, symmetry, makes those surfaces useful. Symmetry in geometry allows operations to give the same result independent of the coordinate system, as you don’t want your answers to be arbitrary depending on the orientation of the axes or on which point was picked as the origin. Symmetry also simplifies problem solving by putting constraints on geometry to where proofs become possible by cutting down the number of variables that have to be dealt with.

Yau goes on to explain, in a manner which I am unable to simplify and so won’t even try, Chern classes and Ricci curvatures. Ricci curves are of interest because they show how matter and energy affect spacetime in Einstein’s equations; just is one more piece along the way to solving the Calabi conjecture. Yau’s proof involves solving complex partial differential equations, called the complex Monge-Ampere equations, which no one had ever solved before, except in one dimension. In order to solve this higher dimension problem Yau first needed to solve the Minkowski problem using real, not complex numbers (which he did in 1976 and which also happened to also be independently solved by Porgorlev in 1971, but as his proof was in Russian, it was not widely distributed at the time). There’s much more to the proof in the book, but as the explanation got more and more difficult to understand, my ability to write something useful for this review got less and less, to the point where all I can say is . . .

All in all, Yau took two decades starting in the 1970s to prove Calabi’s conjecture was true. The proof was done by contradiction, in that Yau first belived it was not true, and in that working out the mathematics to prove it was not true yielded a contradiction, which then logically showed that it must have been true from the first. Proof of the Calabi conjecture yielded the Calibi-Yau shape, which looks like a carefully crumpled up piece of paper. Computers have been used to identify the thousands of possible Calabi-Yau shapes.

String Theory contains 10 dimensions, the regular 4 dimensions plus 6 more, curled in a geometry of Spacetime called the Calibi-Yau manifold. The compacted internal space of the string in String Theory has to be a Calabi-Yau manifold, says Yau, nothing else will do. String Theory posits that the smallest bits of matter are not point-like particles but vibrating bits of string forming either loops or open strands. Vibrating in different ways corresponds to different particles of nature. Proving Calibi’s conjecture and Calabi-Yau manifolds appear to have been necessary (but not sufficient) for String Theory to survive as a theory, as String Theory was stuck when the mathematics needed to go forward appeared intractable.

The impetus behind having a String Theory at all is that the Standard Model of Quantum Theory has flaws. The Standard Model’s strength is that quantum theory describes what the what experimental physicists have detected, the strong, weak, and electromagnetic forces, all with predictions that match measurements to 10 decimal places. The Theory of Relativity also has held up with experiment over time, but as a theory is not compatible with Quantum theory, as spacetime in the Theory of Relativity is smooth while quanta are turbulent. Quantum theory also happens to be silent on dark matter and dark energy. The existing models also don’t agree where large and small converge, for example, in black holes. Having a Unified Field theory, one that ties together all forces, is still an open problem. One big part of this problem is in tying in the force of gravity. Gravity is much, much weaker than the electromagnetic force, as can be demonstrated by use of a simple kitchen magnet. Any time you pick something up with a magnet, you are demonstrating that the earth’s gravity is much, much weaker than the magnet, in fact, 10e-35 times weaker.

String Theory holds the promise of providing a Unified Field Theory (but as yet, no one knows how to do it). One step along the way of proving String Theory is to reproduce the predictions of the Standard Model within String theory. Once you pick the particular Calabi-Yau manifold shape, the forces and particles that are allowed by the geometry should be completely fixed. The one huge problem remaining is that you cannot actually calculate the Calabi-Yau metric, you can only estimate it. Without the metric you cannot calculate mass, and without mass you cannot tell if the String model is close enough to the Standard Model.

The latest advance in String Theory folds is that strings are no longer strings but membranes on which strings reside, called branes or M-branes or M-theory. This theory is not as well developed as String Theory because the mathematics is all that more difficult. Branes appear to be useful in describing gravity and can be used for solving entropy problems of black holes, which in turn points to string theory being at least partially correct. Lots of unanswered questions remain on black holes, such as, “Are spinning black holes stable?”, “Do black holes destroy information?” and “Can energy be extracted from a black hole?”

As stated by one physicist, “To validate String Theory, physicists will have to get lucky, but fortunately, there are many ways of being lucky in physics.” Even if String Theory proves to be incorrect, the mathematics it has necessarily created along the way, including Calabi-Yau manifolds, have proven useful for geometers and physicists alike.