Shakespearean: On Life and Language in Times of Disruption 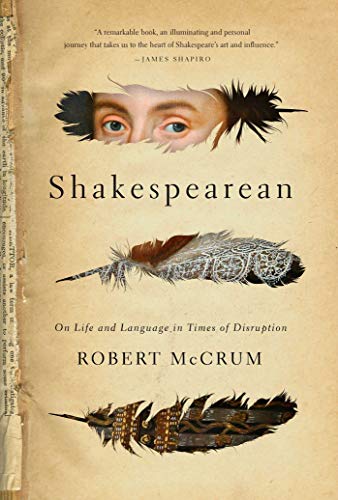 While recovering from a serious stroke in 1995, British author, critic, and editor Robert McCrum found that the only words that made sense to him were bits of Shakespeare. Shakespeare’s works became his “Book of Life.” Now, a quarter of a century later, McCrum offers in Shakespearean the fruits of his reading and witnessing scores of productions. McCrum admits that this book offers a “highly personal” inquiry into Shakespeare’s relation to his own time and his relevance for ours. Shakespearean is more an appreciation than a critical study.

The major problem in McCrum’s book is that he begins with vague goals and concepts. Early on, the author states that his objectives are to connect the works with audiences past and present, to explore the secrets of literary inspiration, and to show that Shakespeare’s works are part of our shared humanity. What audiences? Where? He does talk some about reception of Shakespeare’s works in Britain, Europe and America; however, what does it mean to “connect” these works with audiences? The goal of any good production is to make a connection between text and audience. “Shared humanity” is such a vague term that it cannot lead to cogent argument or analysis, particularly when McCrum’s focus is white and Eurocentric.

McCrum’s Shakespeare is always elusive, private. For McCrum, plays are dramas of identity in crisis, hand the Bard’s overarching theme is the subordination of ideology to human appetite. The key lines in the plays are often questions: “To be or not to be?” “What country, then, is this?”

Shakespearean is not without interesting insights; yet the word that keeps coming to mind was “chatty.” The book is structured by the chronology of Shakespeare’s plays, but it is filled with digressions. It is more a memoir of one person’s relationship to Shakespeare’s work than a critical study. McCrum talks repeatedly, for instance, about his membership in a Shakespeare club and their excursions to productions.

Though he treads ground covered in other books about the Bard, McCrum’s discussions of the plays’ relation to historical events is more convincing than his attempts to link the plays to current political and social issues like Brexit, Trumpism, and COVID. At times McCrum’s use of history can lead to questionable conjecture. Was Shakespeare really mourning the death of Elizabeth in Hamlet, written years before her death? Did the coronation of James lead to a change in Shakespeare’s plays? McCrum doesn’t really develop an argument on this important question.

There are flashes of insight in McCrum’s discussion of individual plays, but the book would have to be twice as long to support anything resembling full analyses of the plays.