Shakespeare Saved My Life: Ten Years in Solitary with the Bard 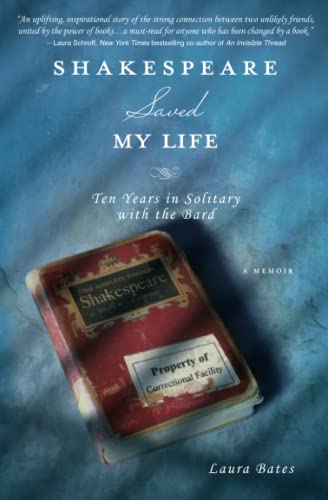 “. . . the book is neither Dr. Bates’ memoir nor a disquisition on the transformative power of Shakespearean language and imagery; it actually centers on murderer and prisoner Larry Newton’s story.”

Laura Bates, the author of this memoir, receives international recognition for her program, Shakespeare in Shackles, from many in penal and academic circles who celebrate its unique value.

Much of Shakespeare Saved My Life: Ten Years in Solitary with the Bard unfolds in Indiana’s correctional facilities such as maximum security Wabash Valley.

As Dr. Bates explains, “I am sitting side by side” with a prisoner who after ten years in solitary confinement is allowed unprecedented permission to work one on one with her to create a series of Shakespeare workbooks for prisoners. This prisoner is one Larry Newton, a convicted multi-murderer. The book recounts their journey together.

As such the book is neither Dr. Bates’ memoir nor a disquisition on the transformative power of Shakespearean language and imagery; it actually centers on murderer and prisoner Larry Newton’s story.

Dr. Bates details the context of daily life in maximum security and other prisons she visits. Excerpts from Shakespeare’s plays dot the text, deliberately chosen “lessons” containing the words “prison” or “prisoner” or “murder” serving as springboards for the author (and readers) to enter the prisoners’ minds and world.

Speeches from (for example) King Richard the Second, Act 5:5 “I have been studying how I may compare/This prison where I live unto the world . . .”, Macbeth Act 2:1 “Is this a dagger I see before me,/The handle toward my hand?” and Hamlet, Act 2:2 in Hamlet’s interchange with Guildenstern when Hamlet states “Denmark’s a prison . . . in which there are many confines, wards and dungeons. Denmark being one o’ the worst.”

Dr. Bates describes her initial amazement at prisoner Newton’s perceptive interpretations of these speeches and his ability to communicate verbally and in writing. “. . . I had never heard such an enthusiastic Shakespearean discussion in any college course I’d taken or taught.”

An autodidact, prisoner Newton is a compelling figure, especially if one buys Dr. Bates’ premise that her expectations were stereotypically shaped to never expect to encounter an “intellectual and philosopher” like Larry Newton in a prison.

How many other Newtons languish in other prisons? This question never arises.

Throughout Shakespeare Saved My Life Dr. Bates herself remains a shadowy figure: no self-reflection, no inner dialogue, little introspection—nothing of the very lifeblood of memoir writing.

We glean tidbits of events of her life while we plow through precise detail of her ingress and egress to and from various prisons, as well as multiple descriptions of procedural formalities inside various prisons.

The format of Shakespeare Saved My Life reads like a workbook, a series of lessons and responses from prisoners to substantiate Laura Bates’ brave and well-intentioned activities and the universal impact of Shakespeare’s canon, while along the way her program paves a path for her to secure tenure as a university professor.

Currently there are many volunteer programs in so many prison systems across this country: meditation, mediation, counseling, tutoring, even the esotericism of martial arts such as aikido. We can honor Laura Bates as one among many and hope someday someone will write a compelling personal memoir of experiences as potentially intriguing as these.