Shakespeare in America: An Anthology from the Revolution to Now (Library of America) 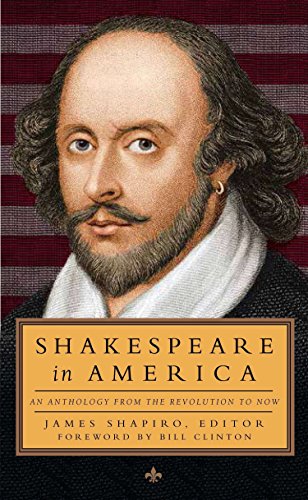 “At the end this wide-ranging, deep, and reflective collection reminds us that Shakespeare is, was and always will be, of the people and for the people.”

Opening with a parody of Hamlet’s famous soliloquy published in January of 1776 and then moving across centuries of American history and culture, Shakespeare in America: An Anthology from the Revolution to Now brings us the story of the Bard as seen by through the eyes of a nation of immigrants.

From the start America’s national identity was tied up in becoming something that wasn’t England. Still, nothing America could ever do was able to separate itself from Shakespeare for the Bard is inextricably bound to these shores.

Across 70 different selections that move from poetry to parody, from history to opinion, and from fact to wild conjecture, every piece selected for inclusion in this volume enlightens our understanding of what Shakespeare has meant to us as a people.

The narrative that grows from the thoughts, stories, and opinions of each writer details how much these plays and sonnets have shaped our union.

Editor James Shapiro prefaces each piece with a reason for its inclusion in the anthology as well as its place in the life and history of the Bard in America. The collection is a fascinating journey that travels along well-known roads, side streets, slight detours, and, occasionally, crazed cul-de-sacs.

As President Bill Clinton points out in his introduction, America has had a place in Shakespeare’s world since the first days that this the continent was settled by foreigners.

To have a president so well versed in Shakespearean lore is nothing unusual, for the connection between Shakespeare and this country, its leaders, and its people runs deep. Both Jefferson and Adams visited Stratford upon Avon, and Lincoln carried a volume of the Bard’s works with him for years. In 1932 President Hoover went out of his way to attend the opening of the Folgers Library.

Many of the pieces, especially the earliest ones, focus on what Shakespeare meant to the beginnings of our national identity. For the big picture Melville worries about an equal literary talent rising from within this country’s then expanding boarders. On a smaller, more personal basis, Mark Twain is preoccupied with the idea that the plays may have actually been written by Bacon.

Being America, it is impossible to escape this country’s long battle with racism. In the cannon it is only natural that Othello raises a wide array of opinions. William Wells Brown, himself born into slavery in 1814, writes of seeing a black man, Ira Aldridge, playing Othello on an English stage.

Other critical appraisals expand on the way that actors both black and white have approached the role. There is also the surprising lesson that John Quincy Adams learned when writing of Desdemona.

Many have used the words of the Bard as propaganda to inspire and rationalize the ideals and validity of war. After the end of the Civil War Maryland resident Mary Preston held the conviction that the Moor wasn’t actually black. When Hitler was coming to power Orson Welles staged a powerful and direct version of Julius Caesar.

The variety found among the ways that the different articles approach the subject will be eye-opening both to casual readers and those who have devoted a lifetime to the Bard. Many of the pieces haven’t been in print for quite a while.

Readers will easily recognize the poets Emily Dickenson, William Carlos Williams, and Robert Frost. But you would be hard pressed to find someone who has previously read of the Indian poet Maungwudaus and the 12 lines he wrote after visiting Stratford in 1848.

Throughout this collection poetry of all forms and across the centuries sings loudly. Written in 1778 Jonathan M. Sewall’s “Epilogue to Coriolanus” serves as an early example of an American poetic verse as well as a purposeful piece of military propaganda.

Moments of American history, both good and bad, come to life. The story of the 1849 fatal riot at the New York Astor Place Opera House is a brutal reminder of the significant toll that our country’s rising sense of individuality has taken on us. Twenty died and hundreds were injured over an argument over who was better in Shakespearean drama: an American or a British actor.

Then there is P. T. Barnum, who in 1844 attempted to buy Shakespeare’s house and ship it back to America—an idea that speaks loudly about the entrepreneurial nature of America.

Humor is always there in the middle of the mix. Isaac Asimov’s short story “The Immortal Bard” pointedly punctures academia’s elitist hold on the importance of it all. While James Thurber, Cole Porter, and others all remind us that Shakespeare wasn’t all gloom and doom.

On the other side, there is the emotional brilliance of Toshio Mori’s short story “Japanese Hamlet.” Over three short pages he creates a story about responsibility, dreams, judgment, obsession, and folly—qualities found in almost all of Shakespeare’s writing.

In Jane Smiley’s “Shakespeare in Iceland” the author speaks candidly about the creation of her novel A Thousand Acres. How she was able to move King Lear into a rural setting of the American Midwest is a fascinating and deeply personal account of the creative process.

Without pandering this anthology captures the vast individualism of American writing—a country in which one person can deny the fact of Othello’s race and another can find inspiration in the Moor’s failings.

At the end this wide-ranging, deep, and reflective collection reminds us that Shakespeare is, was and always will be, of the people and for the people.*

*This review was written with the assistance of Thomas M. Squirek.