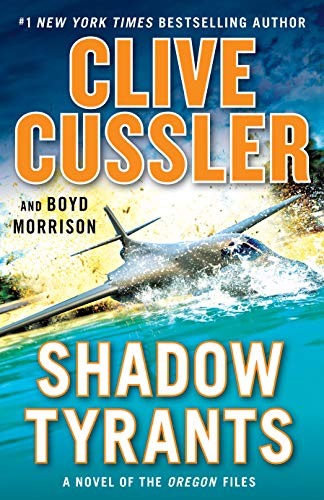 Boyd Morrison and Clive Cussler are back with Shadow Tyrants, the 13th book in the Oregon Files series. The series follows the exploits of Juan Cabrillo and his crew, who work under the moniker of “The Corporation,” and draws its name from Cabrillo’s ship, The Oregon.

Shadow Tyrants begins in typical Cussler fashion, with a prologue set in the past that lays the groundwork for the conflict that drives the story. Two thousand years ago, an Eastern warlord charged a group of his most trusted allies with the safeguarding of potentially world-changing secrets. These allies became the Nine Unknown Men, and their secrets, as well as their titles, were preserved and passed down over the generations.

Fast-forward to present day, and the descendants of the Nine Unknown Men are divided. Eight members have created a powerful AI known as The Colossus, through the use of which they plan to form a cabal which will rule the world, even if it means wreaking havoc in the process.

The lone holdout among the nine believes The Colossus must be destroyed at all costs, and has formulated his own plan, one that involves killer satellites and also carries the potential for global devastation. With both factions convinced that any costs are worth the long-term benefits, it is up to Juan Cabrillo and his crew to save the day.

The story moves along at a rapid clip. With the characters well-established by this point, the reader should not expect much in way of character development. In fact, The Oregon receives more attention and description than any of the characters, with all the bells and whistles of this high-tech ship disguised as a rusty derelict described in loving detail. The plot itself is fairly straightforward with action ruling the day as Cabrillo and company square off against the minions of the Shadow Tyrants.

Shadow Tyrants is a solid action tale. Perfect for readers looking for a fast-paced story with action and thrills that keep the pages turning!