In the Shadow of Spindrift House 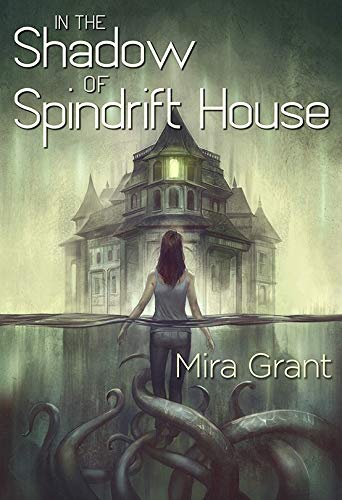 “In the Shadow of Spindrift House is filled with a creeping sense of dread culminating in a climax that will leave the reader with incipient sadness.”

Harlowe Upton-Jones is a misfit and admits it. As a baby, she’s the only survivor when her parents are killed by what the police describe as “a mysterious cult” that is never brought to justice.

Given into her dismayed grandparents’ custody, she has three friends, the twins Addison and Andy, and Kevin, whose mother unofficially adopts her when Grandma and Grandpa abandon her by selling their home and moving away.

All four consider themselves “geeks” and “nerds.” Addison and Andy are bound by that invisible cord all twins seem to possess. Kevin isn’t comfortable around people other than this small group of friends, content to smoke weed and raise his chickens.

With this trio, Harlowe forms the Answer Squad, solving mysteries involving the supernatural. As teenagers, they gain fame but no fortune, and everything goes well until childhood ends and adulthood looms.

“The difficulty with being a member of a teen detective club is that ‘teen’ is a limited-time offer. It was inevitable that one day we were going to turn around and discover we were adults.”

Faced with the reality of disbanding the Squad, finding money-paying jobs, and going their separate ways, Harlowe searches for a means to keep the group together.

She finds it in the mystery of Spindrift House, an old mansion in Port Mercy, Maine. The ownership of the house has long been in dispute, along with its hazy origins, list of many deaths by falls from its widow’s walk, and disappearances of a good many of its owners.

Now three families are offering three million dollars to anyone who can prove who legally owns the property. The rules are simple: Stay in the house for a week, with no contact with the outside world by phone or Internet, and after that time, bring back proof of ownership.

Harlowe feels they have a good chance of winning the money, especially after she learns that one of the families seeking ownership is her own: the Uptons.

That has to mean something. Right?

“This was my family’s house. We might not be able to prove it but I knew it anyway, all the way down to the bottom of my bones.”

As soon as they arrive at the house, the others sense something is wrong.  Harlowe, however, feels at peace for the first time ever.

The old place is simply too gothic to be believed, with a family cemetery containing a good many headstones but no bodies, and those who do lie beneath the soil are either small children and infants or those well past the 80-year-old mark. And what about that photograph of the woman who looks exactly like Harlowe?

That’s before the visions begin, with reality melding and weaving into something else, time bending and warping, and voices telling Harlowe things she doesn’t want to hear.

“If you need to understand, we’ll show you.” It was the voice I was half-convinced belonged to the house itself.”

Then Harlowe finds the ledger, containing Violet Upton’s story and she understands what she has to do.

There’s a good chance only one will walk away from Spindrift House, and it may not be Harlowe.

Fans of HP Lovecraft will find their “Spidey senses” tingling the moment they see those two catch-words words “Miskatonic” and “batrachian” in this story. Though the connection is never mentioned outright, its relation to the Lovecraftian mythos—deserted, derelict New England house, vague unsavory legends, odd family heritage—will immediately be associated.

At first, the continual references to the group’s other “cases,” makes it seem this may be part of a series, though a little investigation proves this untrue. Nevertheless, the reader may find himself wishing he knew more about the mummy, the floating ducks, or the cannibals in the cellar that are referred to more than once.

The first chapters, describing the way “Nature abhors a straight line,” are presented in an impersonal, almost academic way, setting the stage perfectly for those last devastating pages.

Though there is nothing truly overt in the way of horror, this story deals with the psychological effect the house has on the four intruders. The descriptions of the manse and its atmosphere, along with Harlowe’s obliviousness to the sensations the others feel, as well as her odd sense of well-being upon arrival at Spindrift House sets the stage for what is to come in no uncertain terms.

The readers will be automatically programmed to know that whatever happens, it definitely will be nothing good.

In the Shadow of Spindrift House is filled with a creeping sense of dread culminating in a climax that will leave the reader with incipient sadness.