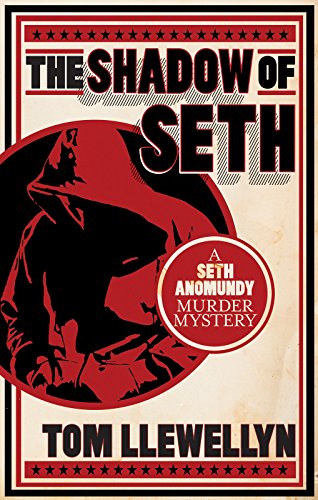 “The Shadow of Seth is a book that even adult fans of noir will enjoy.”

Sixteen-year-old Seth Anomundy is a product of Tacoma, Washington’s poorest neighborhoods. He lives with his single mother, who won’t tell him who his father is, makes decent grades at his local high school, and works at a variety of unglamorous jobs. He works at Choo-Choo’s Gym as a sparring partner to help pay the rent on the dingy one-room apartment where he and his mother live, is a part-time cook at Miss Irene’s soul food café, the Shotgun Shack; and runs errands for Nadel, the clock repairman.

To say Seth lives a hard life on the poverty line is an understatement, but he is not warped by bitterness. He and his mother are always just one step away from a homeless shelter, but Seth is loved, and his mom works hard even if she is only cleaning lady. “I kissed her on the cheek, then hugged her. She smelled like bleach. Like the work she did to keep me clothed and fed.”

After his mom left for work, Seth has an unexpected visitor: Azura Lear, a classmate of his, but one he had never spoken to until today, when he picked up her father’s antique clock for repair. If Seth is on the bottom rung of the social ladder, Azura is sitting at the top.

Azura wants to know about his mother, which Seth considers none of her business, but finally describes his mom. “My mom’s forty-nine percent free spirit and fifty-one percent cleaning lady.” Azura is not satisfied with Seth’s answer, but it is all he intends to tell her.

“What was I doing here with Azura. There was no way this rich girl had room for me in her life. Maybe for a day—a week, tops—but that was it. Then she’d get distracted by some shiny thing, and leave me in her designer dust.”

Seth leaves Azura alone at the beach with her Lexus and walks home. At three o’clock in the morning ChooChoo, owner of Choo Choo’s Gym and Seth’s mom’s most-of-the-time boyfriend, shakes the teenager awake. Seth’s world has imploded while he has been sleeping. His mom, his loving, impulsive, always out of luck mom, is dead.

“I didn’t know what to feel about Mom. Was I supposed to miss her or be mad at her? I was used to both situations. She was letting me down again. She was gone. She was dead and I didn’t even know how she died.”

Before Seth can meet with Detective Carlyle, he meets up with Azura’s boyfriend, or least gorgeous Erick Jorgenson believes he is. Aided by three friends and a baseball bat, Erick proceeds to administer a beating to Seth because he is “. . . hanging around Azura.” To make matters worse, the cop who breaks up the fight blames Seth. “And it sounds like you got enough trouble already without hassling these boys.”

When Detective Carlyle tells Seth that his mother was poisoned by a toxic substance, maybe an accident, or suicide, or murder, Seth knows it was murder because she would not kill herself and leave him alone, nor would she accidentally drink cyanide. She was murdered, and as the jerk cop who blamed him for starting the fight with Eric told him, no one cared. “No one here has time to try to find the killer of a woman like your mom. She doesn’t register high on the priority list, if you understand.”

To make matters worse, Detective Carlyle tells Seth that their best suspect is Miss Irene, who owns the Shotgun Shack and who has been like a second mother to Seth. He doesn’t believe Miss Irene would hurt his mom, but on the other hand, why would she disappear? Besides, where would Miss Irene get cyanide?

If Seth is certain of anything, it is that no one is going to seriously investigate his mom’s murder. Detective Carlyle believes he knows the guilty person, and no one else in the police department cares. His mom is no one priority but Seth’s.

A well-written teen mystery with a likeable protagonist, The Shadow of Seth is a book that even adult fans of noir will enjoy.