The Shadow Out of Time 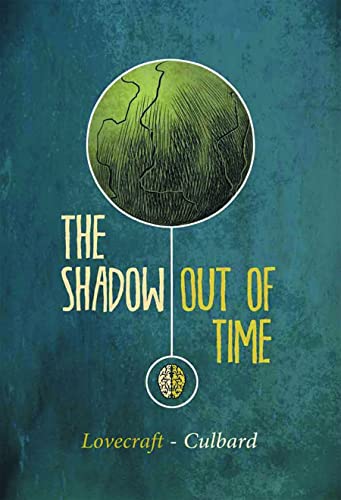 Everyone is terrified of something. It doesn’t matter if it is spiders, werewolves, vampires, brain-gobbling zombies, or the institution that holds your student loan—something out there is causing you to lose sleep.

The terror at the heart of The Shadow Out of Time by H. P. Lovecraft is a concept far more horrific than the idea we are going to be attacked by anything from the physical world.

This adaptation of one of the last tales written by the influential master of horror opens a door to a different type of fear—a fear born from the idea that something previously unknown can invade through the core of our being and leave us a zombie of a different sort, hat an unknown entity can take root in the soul of our consciousness and use our body for its own purpose.

Without a word of warning we simply stop being us.

Until the ones responsible for this hostile takeover of the human machine are finally revealed, this is the horror of the trapped mind. It is when the reveal takes place that our fear multiplies. We can relate to spiders, werewolves, and other bogeymen. Our minds have the ability to understand their physical form.

But aliens who travel not only across space but also through time? Aliens who can usurp your consciousness whenever they please? That at any moment we can easily lose our identities to a foreign entity without even a chance to defend ourselves?

Nathaniel Peaslee is a professor at a university. One day during a lecture he begins to show signs of what others can only describe as a “nervous breakdown.” For the professor’s part, all he can see is a massive geometrically perfect sphere approaching him.

As the sphere swallows him whole, his mind disappears from his own consciousness. Years later he returns to his original state with no memory of what has happened.

In truth a race of time traveling aliens has possessed his body, and his mind has taken a place in their world. Upon awakening from his unconscious state he begins a quest to find out where he actually was. The answers he finds only create more questions. His journey to find these answers moves in unexpected and exotically thrilling ways.

This wonderful adaptation of the original novella is by artist and writer I. N. J Culbard. His art not only brings the story itself, but also subtly enhances the philosophy and ideas behind what is written.

The Shadow Out of Time opens with a two-page spread showing us the star-filled expanse of a night sky in Australia. A black landscape fills the bottom part of the page, gradually rising through a brief band of purple and then dark blue as it gives way to the blackness of the sky.

The stars don’t resemble the traditional “twinkly-pointy” stars of our child hood. Instead they look like the more adult paint drops of Jackson Pollock. The abandon with which they appear belies their loose organization in nature.

With the exception of a single, small rectangle of narration, the art reminds us that what is out there is far larger, far more intimidating, and far more unknown than we can admit or understand.

Turn the page and we are greeted with the exact opposite of tranquility. A massive ship is seen flying out of a sun that literally shoots lines across the deep blue-green of the ocean. The urgency of the image mirrors the narrator’s drive to find the truth.

Another artist might have made the professor’s occupation by the alien entity a full page of splendor and explosion, showing off his chops or titillating the reader with the obvious. In the understated style of Mr. Lovecraft, Mr. Culbard leaves the action buried on a single page inside a more traditional nine-panel sequence.

A page later, when the alien begins to take over the professor’s being, the artist opens up the action. Using the contrasting color scheme of the darkness of the classroom against with the bright light of what is attacking the professor, he pits the physical world against the world of the mind, the internal. In the process he alludes to the age old battle of perception versus reality.

As he has shown in his previous adaptations of Mr. Lovecraft’s work, as well as his previous work on stories by Edgar Rice Burroughs and Sir Arthur Conan Doyle, Mr. Culbard has a natural sensitivity to the style of each writer he covers.

The complexity of Mr. Lovecraft’s story is enhanced by the art showcasing what he wrote—a great way for a novice reader to discover the work of H. P. Lovecraft.

And a great way to make yourself think about where your place in the Universe really is . . . and how much mankind really knows about the present and the past.