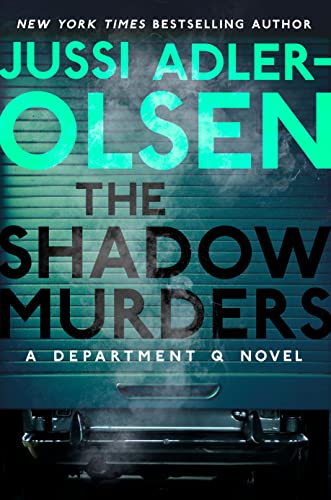 “The Shadow Murders is a big, complex creation stuffed with a cast of deluded avenging angels and the sinners they kill.”

What do Bronson in Death Wish, Foster in The Brave One, and Schwarzenegger in Predator have in common with this Danish crime novel? Vigilantism and a hero seeking revenge? In The Shadow Murders, however, swap hero for villain (or more accurately villains) and toss in some cooking salt near or in each of the bodies.

The prologue begins in 1982: “. . . the rancid smell of burned flesh mingled with the stench of ozone . . . from lightning strikes.” Six dead and one scarred but alive; one who will interpret being spared as God’s blessing. Turn to chapter one. Another big bang. An auto-repair shop explodes, killing its immoral owner, four employees, and a young child.

In November 2020, the mother of the child commits suicide. Her death opens the cold case, the specialty of Department Q headed by Detective Carl Mørck, with assistance by Rose, Gordon, and Assad. Their boss, Marcus, believes other related murders lurk in Copenhagen’s history, a suspicion that proves correct as dozens of killings are uncovered, most dismissed as suicides or accidents.

They surmise that the salt left in situ, without logical explanation for its presence, is a symbolic reference to Sodom and Gomorrah, cities where whoring, raping, and social cruelty were rife, where God punished the cities by destroying them and turning Lot’s disobedient wife to a pillar of salt. As the self-appointed hand of God, the murderer says, “Our work and mission make the world a better place. We have God on our side. And as the Bible tells us, His divine justice can be merciless.”

Merciless indeed as the mentally unstable yet brilliant killer organizes a cabal of mostly women who wreak the ultimate revenge on people they deem harmful to society. (This group is not a Tuesday night knitting club, but if one of the members becomes known to the police, out come the needles—sometimes literally—and the person is excommunicated and murdered.)

Department Q’s investigation proceeds, hampered by Covid-19 restrictions, the onset of the Christmas season, and the inquiry into Carl’s complicity in the “Nail-Gun Case,” in which he is suspected of drug-trafficking. Through most of the story, he is avoiding arrest and is AWOL from the police station, forced to lead his dedicated group outside the purview of his superiors.

The four primary Q members are invested with quirks so they are differentiated, although their characterizations sometimes seem awkward. For example, Assad, who is of Middle Eastern descent, is a potentially fascinating character (much of his history is abbreviated here), but Adler-Olsen attempts to make Assad colorful via the frequent mash-up of idioms, such as “someone fishing” for “something fishy” or “the nail in the haystack” wear thin. The habit also doesn’t make sense because Assad uses other figures-of-speech correctly, and his dialogue is as fluent as his Danish counterparts. The effect—meant to be humorous?—feels as though the author is faintly impugning the man’s intelligence even when Assad is obviously very smart.

At 448 pages, The Shadow Murders is a big, complex creation stuffed with a cast of deluded avenging angels and the sinners they kill. The short chapters impel forward speed, which picks up when Carl and the team realize a captured man will die on Boxing Day (December 26), the birthday of dictator Mao Zedong (each of the chosen targets dies on the birthday of a villainous historical person). As Department Q members suffer through a non-existent Christmas, sleepless days and nights, and as Carl evades incarceration by his own police department, the pressure becomes intense. Will they learn who is responsible for the deaths and where the man is being held in time to save him?

This is the ninth title in the “Q” series, which begins with The Keeper of Lost Causes (2007). Jussi Adler-Olsen is Denmark’s #1 bestselling author, an elite writer among a field of exciting Scandinavian suspense writers.