Shadow in the Glass (A Greer Hogan Mystery) 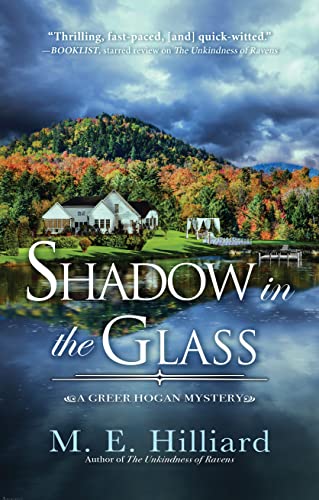 Not having seen her friend, Sarah Whitaker, for a while, Greer Hogan heads up to Lake Placid, New York, to attend her nuptials with parties held over several days. The Whitakers have a gorgeous spread on Mirror Lake, where Greer believes she will stay, but Sarah mentions their house, guest cottage, and other properties are filled with unexpected guests. So when Sarah puts her up at the local luxury hotel where she can relax and be pampered, Greer is thrilled. This is Sarah's third marriage, and though happy for her, Greer hopes this one will last.

Excited to be with her old friend again, Greer is somewhat of a sleuth, and she is now fixated on finding information about her husband Danny's murder because most of the people attending the event were present upon his death three years prior—a case that was never solved.

It is now October, and the colors around the lake are gorgeous—a perfect setting for a wedding. The night Greer arrives, she notices a light in the attic room of the house next door to Greer's parents’ home—a house she believes is vacant. Her natural suspicions arise, but she brushes them off, thinking it's just a reflection.

Now middle-aged, since Danny's death, Greer changed her life. She is currently a librarian in a small town, giving up a lucrative job in the city. Her passion is reading crime and mystery novels, which leads her to become an armchair detective.

Upon spotting Desmond, Sarah's father, at the hotel with a younger woman, Greer wonders if he could be having an affair, though she knows he's devoted to his wife, Jane. The woman he was with was Brittany Miles, one of Desmond's employees. When Greer meets her, she instantly dislikes the woman and believes she's up to something.

Ian Cameron, an old beau of Greer's, is attending the festivities, and he is happy to see his old flame. He wakes her up near dawn the following morning, suggesting a picnic; not an early riser  Greer grudgingly goes along, hoping he can shed some light on Danny's killer. Canoeing in the morning haze, Greer peers over the side of the canoe. She is shocked, swearing she sees a face in the water, but Ian reminds her the reason is called Mirror Lake, and the reflection she thinks she saw is probably her own.

As the different wedding events take place, there is a sudden concern for Brittany who is missing. Not long after, a body found floating in the lake turns out to be Brittany. Frank, the guest who discovers the body, falls into the water in shock, but everyone speculates he may have pushed her in. Did they argue? But Frank, probably from the shock, is whisked away to the hospital, where he later passes from an alleged heart attack. Funny, but he was in stable condition, then unexpectedly he dies?

An autopsy proves the water found in Brittany's lungs came from Whitaker's reflecting pool and not the lake. Who wanted to kill her, and why does it seem murder always occurs wherever Greer goes?

"Brittany turning up dead hadn't surprised me, but the news about Frank was a shock. According to Sarah, he'd been in the ICU but had been holding his own. Everything had seemed stable. Shelby [his fiancée] had left his room to get something to eat, and when she got back, a crash cart and a bunch of nurses and doctors were in his room. A few minutes later, he was gone."

Greer puts the puzzle pieces together, but this proves to be a difficult situation. Many wedding attendees are considered responsible for Brittany's demise, seeing she was not a favored guest. The police have many suspects in Brittany's killing, and Greer, a lover of whodunnits, decides to do some investigating of her own. Unfortunately, she doesn't learn anything about Danny's death, which was something she hoped to do.

Shadow in the Glass is Book #2 in the A Greer Hogan Mystery. A bit confusing at first, it would be best to read the first installment in this series. However, getting into the flesh and meat of the novel clarifies the plot somewhat. Several different characters with motives for murder are considered, and the author's extensive citing of many mysteries demonstrates her knowledge of this genre. For cozy aficionados, this read is sure to please.