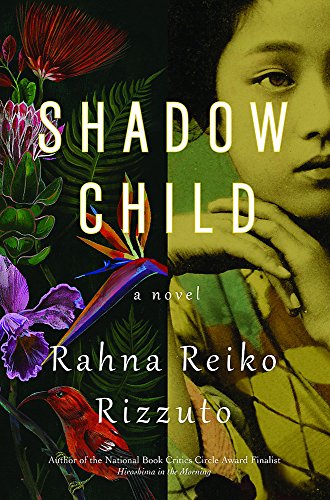 Shadow Child is a detective story set in 1960s Manhattan, and also a historical saga of a Japanese-American woman during World War II, and also a tale of teen rivalry, which shifts from page-turning action to near-poetry as it describes the lush Hawaiian landscape and the mystic connections between identical twin sisters.

Oh, and it’s written in four narrative strands from three points of view that employ four different voices, including the rarely used second-person “you” as well as the equally rare, first-person plural “we.”

Amazingly, author Rahna Reiko Rizzuto—whose debut novel Why She Left Us won the American Book Award in 2000—has managed to weave all these threads into a compelling exploration of family, history, and memory.

“Our lives were dappled with clues we might never notice, with hints we must decipher for ourselves,” one of the twins, Hanako, realizes as she stares at her mother’s stark photos of bomb-blasted Hiroshima.

The book opens when the other twin, Keiko, abruptly arrives in New York City to see Hanako, claiming that “I have your inheritance,” after six years of total estrangement. But before the two have a chance to talk, Keiko is brutally attacked and left in a coma.

To try to break through the coma, Hanako decides to tell Keiko her version of their life story—the book’s second narrative strand. In the process, however, she realizes that she must rethink almost every piece of her past, including the night when Keiko abandoned her in a dark, tunneled cave.

“We are running out of time,” Hanako worries. “I have given Kei everything: more stories, more smells and sensations. We have almost caught up; my memories have crept forward to the time when we lost each other. Or maybe the truth is, I have done nothing. Nothing but . . . talk to myself, and pretend that I can create the world as I want it.”

Simultaneously, the unconscious Keiko is also—somewhere deep in her silence—exploring her own version of that same history, creating a mirror-image third narrative.

The bulk of the novel consists of these two sets of memories:

The twins, born and raised in postwar Hawaii, are so close as little girls that for years they call themselves simply Koko, “made of the small, safe endings” of their separate names. Together with their Japanese-American mother, Miya, they are a complete unit that doesn’t quite fit in their small town.

“Those are the days when both of us are still Koko. There is no one or the other. No Hana, no Kei.” When they sleep together with their mother, Hanako recalls them as “Three prone figures in white on the floor: the middle one tall, refusing to bend in either direction, the small ones curled. Three dark heads of hair, dark eyelash fringes.”

When the twins are five, Miya marries Arnie Swanson, a local electrician. While he is kind, loving, and unbelievably patient, he is nevertheless a big, white, male outsider.

Moreover, the girls start to grow up. Seduced by separate friends and interests, they split into Hana and Kei.

A tidal wave when they’re 13 years old wipes out their personal world as thoroughly as it tears through the physical one, as if “a giant hand had dragged itself through town, sticking its dirty fingers first down one road then the other, then swinging south and raking everything up with a flat palm.” Kei, the rebellious “bad” daughter, sneaks out of the house, almost drowns, and ends up rescuing a little girl, while Hana, the obedient “good” daughter, takes their injured mother to the hospital.

The upshot: Kei is lauded as a hero and swept into the popular crowd at school. And Hana is devastated as Miya ignores her. “Kei was the daughter Mama chose.”

The fourth narrative strand tells the backstory of Miya—then known as Lillie—a foundling adopted by white couple in Northern California. This narrative has some painfully vivid set pieces, but it relies on too many forced contrivances to arrange that Lillie will be both living in the infamous internment camp at Manzanar in the California desert, and also living in Hiroshima when the atomic bomb is dropped.

Indeed, from Manzanar to “mean girl” teens, near-murder to mystical twinship, the book is just crammed too full. Some topics—like the implicit racism this Asian-Western family faces—are inevitably slighted. Other events, like “the hour leading up to the cave” where Hana is abandoned, are foreshadowed with too many ominous teasers, as though to help the reader keep track.

But Rizzuto is such a skilled writer that she never drops any of her numerous threads. The novel doesn’t feel crowded, and it’s always clear who is talking and when—although sometimes the “who” can be either twin, or both together.

Ultimately, Shadow Child is about how to understand our own stories, and it tells that story beautifully.