In the Shadow of the Bridge: A Memoir 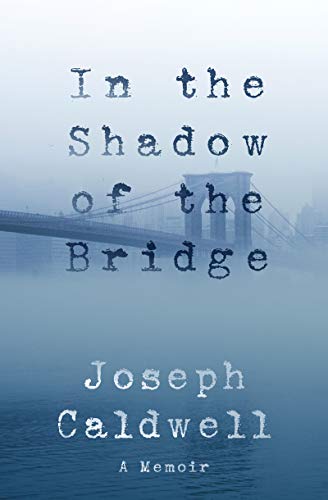 Joseph Caldwell’s memoir In the Shadow of the Bridge is an intimate remembrance of gay things past, of the great loves of his life, and New York’s LGBTQ community, before Stonewall and during the height of the AIDS epidemic.

He was raised in the Midwest, one of eight children, and after his discharge from the Air Force he moved to New York in 1950. His mother told him “You are entitled to make your own mistakes.” His first apartment was one of the Coldwater Bohemian flats on Hague St. under the Brooklyn Bridge.

Caldwell conjures the intoxicating Post WWII era in New York as the epicenter of publishing, the theater, and fine arts. Most significant is the fact that an estimated million GLBTQ Americans flocked to New York because it was the (in)visible gay mecca, in an officially, culturally completely homophobic country.

He became a writer for WQXR classical radio station, wrote for the soap operas The Secret Storm, and most famously Dark Shadows, credited as the co-creator of the character Barnabas Collins. He was also a playwright, acto,r and award-winning novelist.

He was living the gay life, but in 1959, as he dragged himself back from an all-night gay party/orgy in Brooklyn, walking over the bridge through a misty dawn and walking back to his on a misty dawn, he made hollow promises to himself that he had to stop living such a hedonistic life, when he passed a man, and they gave each other the eye and pre-Grindr universal gay codes that they were mutually available, and they went to Caldwell’s apartment.

Gale was an art photographer and “true Brooklynite,” as Caldwell describes him. They courted each other, and after a few missteps they became lovers, and went out on the town as a couple. Then it all started to fall apart. They were not communicating well, wanted different things, and soon enough, Caldwell describes, they drifted apart almost reluctantly.

The pressures and dynamics of gay male relationships in the ’50s and ’60s were self-defining, even if culturally, gay couples were derisively viewed as imitating heterosexual conventions.

Even after they break up, Joseph continues a tradition of holding a LGBTQ community party on the Bridge as a symbol of community and always in memory of his lost relationship with Gale.

They met again 15 years later during the worse years of the AIDS epidemic. Caldwell was volunteering his time to the cause of fighting AIDS and was part of the buddy program, providing any support care that was needed for PWAs as they faced the end stages of the disease. When he found out that Gale was suffering the final stages of HIV/AIDS, he essentially moved in with him, even though Gale was clear that they would not be emotionally picking up where they left off.  In fact, their reconciliation was even more intimate and profound.

His acerbic accounts of the theater and TV of his era are a bit tangential. But the heart of the book is his unwavering love for Gale and his involvement with the LGBTQ activists and community, especially in the worst years of the epidemic. The book is a powerful testament to solidarity in the city of gay dreams.