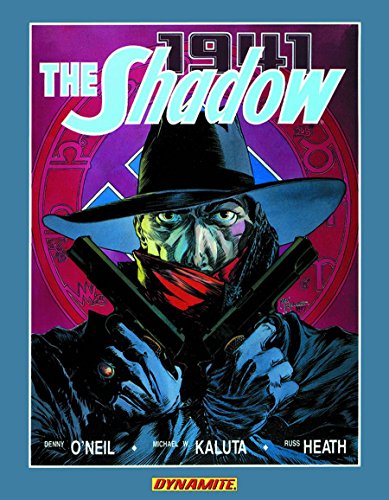 In the months prior to America being dragged into the Second World War, the country was filled with undercover agents from Germany and other foreign lands. We normally think that these agents were looking to keep America from entering the war.

The great twist at the heart of The Shadow 1941: Hitler’s Astrologer is that the threat to the war effort is coming from a German Officer and is directed at manipulating der Führer himself!

It is relatively common knowledge that Hitler employed an astrologer. In the hands of writers Dennis O’Neil and Michael Wm. Kaluta (who did the pencils), this slightly obscure bit of history serves as the launching point for an endlessly exciting graphic novel featuring the classic pulp hero, The Shadow.

This nonstop adventure begins in Times Square where Mr. Kaluta beautifully captures the hustle and claustrophobia of a Sunday morning in 1941. From there the pace accelerates into a series of thrilling action sequences as The Shadow and his crew race across the Atlantic until the conflict comes to a head in the heart of Nazi Germany.

Gretchen Baur is a German student studying in NYC. She is also the daughter of Germany’s premier astrologer. A gifted astrologer herself, she has been collecting astrological information at the request of Dr. Josef Goebbels.

Back in Germany her father is playing a dangerous game as he functions as astrological advisor to the Nazis. He reports to Goebbels, but a rouge Colonel in the SS is looking to kidnap the girl for their own means.

Thankfully The Shadow and members of his elite team are on hand to make sure that this doesn’t happen!

Surrounded by an able crew of associates, The Shadow was mysterious, vengeful, and often violent without remorse. Introduced in 1930 the character went on to be one of the most successful radio and pulp creations ever.

In many ways The Shadow created a template for success that set the stage for Batman and other costumed heroes who followed in his wake. Each of whom, like The Shadow, while devoted to the law, clearly function outside of society.

While he had a strong presence in comic books during their golden age, it wasn’t until the seventies that The Shadow got a creative team worthy of his history.

Working for DC during that period Mr. O’Neil and Mr. Kaluta created several of the best Shadow stories ever. A decade later the team reunited to bring Hitler’s Astrologer to Marvel. Long out of print, this classic is now available in a completely remastered format from Dynamite Entertainment.

As a comic artist Mr. Kaluta is unusual in that his work doesn’t have obvious ties to the work of previous comic artists. His style is much closer to the world of pulp and poster artists from the turn of the century and into the thirties.

With comic legend Russ Heath providing magnificent colors, he brings a period of history alive as few others could. His expressive and cinematic feel is fully realized in a single panel as a seaplane lands in the water outside of Spain.

Above the craft an image appears in the clouds above of lovers kissing. In the bottom right corner the coast sits waiting for them to find their real destiny, a destiny that may hold death for either of them. It is a moment of quiet tenderness that gives the reader a slight second to catch their breath before the chase continues.

While the book has moments of pure beauty, neither Mr. Kaluta nor Mr. O’Neil shies away from the sadistic nature of the Nazi regime. But they don’t throw the details in our face either. The horror is right in front of us, but the details are left to our imagination.

In one scene the despicable Colonel Friedrich Wolf is still taking a precise knife to the body of the victim. Mr. Kaluta doesn’t show us the incision or graphic displays of blood. The true horror of the situation is reveled when we learn the body has already been dead for a half an hour!

With the victim’s head turned slightly toward the reader we see the blood on his lips. This is not only a direct reference to the torture the man endured, but a sharp reminder of how the Nazis would extract gold fillings for profit from anyone they killed.

The seventies run that Mr. O’Neil and Mr. Kaluta had on The Shadow title is considered to be some of their best work ever. They were able to bring life and beauty to The Shadow that hadn’t been seen since the title’s heyday in the pulps. This is an example of two pros at the peak of their abilities.

The story and action wouldn’t be out of place in a classic Warner Brothers film from the same era. All it needs is a Bugs Bunny cartoon and a newsreel narrated by Ed Herlihy at the start.