In the Shade of the Shady Tree: Stories of Wheatbelt Australia 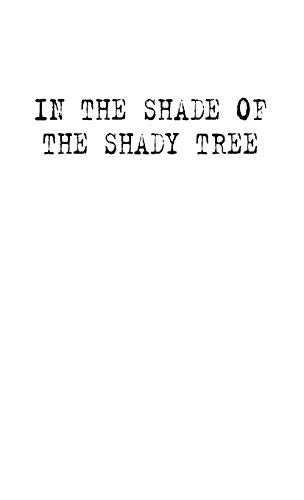 “John Kinsella is hard on the people of the Wheat Belt, especially the region’s still-dominant old families. Most of his sketches are gloomy in their content and conclusions. But while In the Shade of the Shady Tree exhibits some condescension toward the ruling cliques in the Wheat Belt, this does not mask Mr. Kinsella’s great skill as a writer nor detract from the power of his sketches.”

The parallels between Australia and the U.S. are striking. Both countries are steeped in rugged individualist lore. Both show a remarkable fondness for guns, beer, and anachronistic violent sports named football. Both have regrettable histories of confiscating land from native peoples. And today, both nations are divided culturally between white-collar secular-liberals and farmer/rancher/miner religious-conservatives. Secular-liberal writers in both countries share a grim fascination with their respective country’s redneck interiors.

Case in point is John Kinsella’s In the Shade of the Shady Tree, a collection of character sketches drawn from Mr. Australia’s Wheat Belt, a region in between the continent’s west coast and interior desert. Mr. Kinsella offers more than thirty sketches—none more than ten pages, some as few as three.

These sketches are not short stories; the term short story implies more plot and closure than Mr. Kinsella generally offers. Despite this limitation, Mr. Kinsella uses the sketch vehicle to deftly frame the region—particularly its harsh environment and its hard people.

A few of Mr. Kinsella’s sketches are optimistic, particularly when he is writing about children: In “Bats,” for example, a city girl and a country boy are ill-matched playmates, but they ultimately show common empathy for an errant bat that ensnares itself in the girl’s long hair. “Parade” depicts an innocent child riding his trike in pursuit of his town’s annual procession.

The majority of the Mr. Kinsella’s sketches, however, show a brand of downbeat-realism reminiscent of John Steinbeck’s and William Faulkner’s toughest looks at Depression era rural America. For example, “Memorial” depicts an old World War II veteran who cannot bring himself to show courtesy to the niece of a Japanese soldier who traveled all the way from Japan to the Wheat Belt to bring him a gift from her dying uncle.

In “Purchase,” a drunken-recluse miner and his delinquent son attempt to harass an older couple into abandoning a recently-purchase adjacent lot. In “Rule in Favor”, an old farmer shoots an aboriginal boy drawn to the farmer’s pond; the farmer is acquitted of wrongdoing by a good-ol’-boy legal system.

Mr. Kinsella cannot resist offering social commentary along the way. The Wheat Belt is a place of “too many pubs and not enough jobs,” a place where people comment, “We’re on the same stretch of nothing to nowhere.“

Exploitation is at the root of most of Mr. Kinsella’s sketches: mineral extractors and farmers deplete a fragile environment, racist old families perpetuate disparities against minorities, and violent alcoholics abuse innocents.

Mr. Kinsella’s brief sketches do not offer many extra details; most end without tying up loose ends. In the best of these sketches, he creates a salutary “flash fiction” effect—writing an engrossing story in a few pages.

In “The Fable of the Gravel Pit,” for example, Mr. Kinsella brings us through the life of two farmer neighbors—old friends and rivals concurrently. We learn of their fights over a woman, repressed homosexual urges, and a climactic confrontation over a proposed gravel pit. He does this in three and a half pages.

John Kinsella is hard on the people of the Wheat Belt, especially the region’s still-dominant old families. Most of his sketches are gloomy in their content and conclusions.

But while In the Shade of the Shady Tree exhibits negativity toward the ruling cliques in the Wheat Belt, this does not mask Mr. Kinsella’s great skill as a writer nor detract from the power of his sketches.