Sex, Mom, and God: How the Bible's Strange Take on Sex Led to Crazy Politics--and How I Learned to Love Women (and Jesus) Anyway 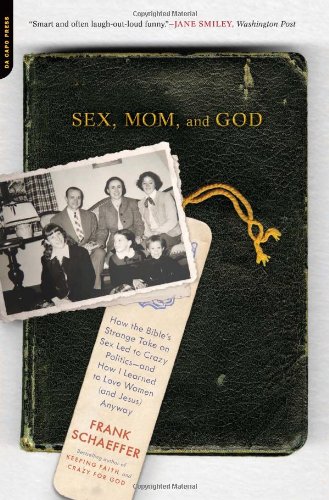 “Sex, Mom, and God is a puzzling and disturbing book.”

Francis and Edith Schaeffer were evangelical Christian leaders in the 1950s–1980s. They founded L’Abri, a retreat center in Switzerland that was influential in establishing their theological thinking both in Europe and the Unites States. Frank Schaeffer, their son, was involved for many years with conservative political activism that was strongly influenced by his father’s evangelical ideas.

Sex, Mom, and God is a puzzling and disturbing book. It covers much of the same ground as his earlier Crazy for God, but takes a different approach. This book rambles back and forth through Mr. Schaeffer’s life, which makes it a little hard to follow. It also tells a family story that has been strongly challenged by others who knew the Schaeffers well.

The first topic in the title is Sex, and Frank obviously had this on his mind a lot while growing up (and as an adult). He spends pages talking about his teen years and his raging libido (not his terms). In one chapter he describes in detail his attempt to have intercourse with a snow statue. He got his girlfriend pregnant and then married her. His desires did not seem to slow down after marriage. In one lengthy passage, he reminisces about a female intern who spent a year with his organization. While Esther edited videos, Mr. Schaeffer engaged in lengthy sexual fantasies involving her. He also admits that she was not the only woman that he was to fall in love with during his marriage. To his credit, he did not act on these thoughts (if he did, he did not publish any details in this book). But I do have to wonder how his wife Genie feels about all this honesty and openness.

Mr. Schaeffer was involved in the culture wars, and here is where his abandonment of his evangelical heritage comes through clearly. In one section, he has a fairly reasonable discussion about the issue of abortion. Mr. Schaeffer is opposed to late-term abortions, but has no problems with abortions during the first couple of months of pregnancy. His support for the homosexual lifestyle has gotten him a great deal of criticism. Mr. Schaeffer’s opinion of evangelical morals can be summed up in a statement he makes: “The moralistic denial of healthy heterosexual and homosexual sexuality has also unhinged the Evangelical leadership . . .”

Of course, there is no discussion as to exactly how healthy the sexual behaviors are that Mr. Schaeffer advocates. The evidence to date certainly would not support his position.

Mr. Schaeffer strongly criticizes the sexual abuse scandals of the Roman Catholic Church. The failure of that church to deal quickly and effectively with the abusive priests is a disgrace. However, he does go a little far when he accuses all anti-gay activist evangelicals and all Catholic bishops of being secretly homosexuals or adulterers. He says it jokingly, but why say it at all?

The second section of the title is Mom, and it eerily links somewhat to the Sex portion of the title. Mr. Schaefer describes many conversations he had at a fairly young age with his mother that would probably cause Freud to raise his eyebrows. Discussions of things like menstrual periods, what a woman should wear to bed to keep her husband happy (“a sheer black negligee”), masturbation—all these and more were freely discussed by Mr. Schaeffer and his mother even up to his early adolescence. Edith even shared some information about her sex life with her husband.

Mr. Schaeffer was also strongly influenced by his mother’s theological positions, views that were often in disagreement with those of her husband. Instead of airing them openly, she would undercut her husband in conversations with Frank. Here theology was often uninformed and owed more to her personal feelings about something rather than a solid foundation in the Bible.

Most tragic is the descriptions that Frank gives of the physical abuse his father supposedly inflicted on his mother. Others who lived with the Schaeffer family (often for years) have strongly challenged these statements.

The God section of the title covers a lot of ground for author Schaeffer. It begins during his childhood and adolescence with lengthy discussions between him and his mother, focusing mainly on some issues out of the Old Testament (often with a heavy emphasis on sexual issues). The recounting of these conversations reveals a couple on interesting issues. Edith’s theology is shallow, uninformed, and incomplete. The questions being asked are, for the most part, reasonable and have been answered well over the centuries. There apparently was no attempt to pursue these issues beyond the responses given by his mother. There was also no apparent dialogue with his father, who was a trained theologian and would have a lot of useful information to offer. Edith often undercut her husband in conversations with Frank, questioning Francis’ knowledge and understanding of Scripture.

Another major issue is Mr. Schaeffer’s categorization of other Christians. Anyone who held a position (either on theology or Christian behavior) to the right of his was labeled either a “fundamentalist” or a “hyperfundamentalist.” Mr. Schaeffer misuses a term (fundamentalist) that has a fairly clear definition and historical meaning in theological circles. He includes (among others) some wings of the Presbyterian Church. These branches are certainly more conservative than the Presbyterian Church (U.S.A.) that recently voted to ordain homosexual clergy, but do not fit any rational definition of “fundamentalist”.

Mr. Schaeffer puts a great deal of emphasis on the activities of groups that he feels exert major influence on evangelical thinking. Among these is the Christian Reconstructionist movement (dealing with a theological approach to government). While some of the ideas of this movement may have influenced mainstream evangelical thinking, there is certainly no major groundswell of support for their entire program.

A great deal of time is spent on the political activities of evangelicals (as if other segments of the Christian church do not engage in political activity). Mr. Schaeffer expresses a great deal of pain about his own involvement with what he calls the “Religious Right.” Many people think his discomfort is overdone. In a Books and Culture interview (March/April 2008) the renowned theologian and religious scholar Os Guinness had this to say: “He inflates his own role in founding the Religious Right, even if out of self-flagellating disgust.” Guinness also added that Mr. Schaeffer’s “broad dismissal of faith different from his own are often absurd, and his portrayal of recent Christian history is woefully ignorant.”

Sex, Mom, and God is a problematic book. Issues are covered superficially and often inaccurately. Detailed remembrance of conversations is questionable. The book rambles and bounces back and forth in time and topic. Yes, there are faults within the Christian community. But there are moral, ethical, and political issues that deserve much more than a broad-brush coverage filled with mockery and dismissive statements.