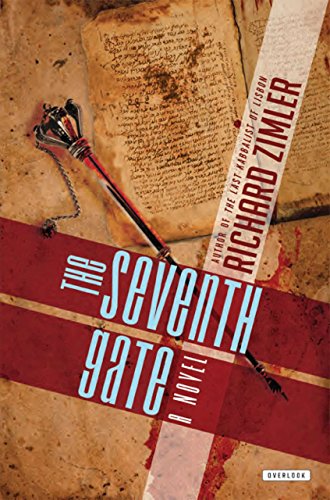 “Zimler’s character development is electrifying, and his plot rolls along ever faster into the depths of fear. Zimler wraps all of this within the cryptic veil of Jewish mysticism.”

The Seventh Gate begins in contemporary America. Our infirmed and elderly protagonist Sophie is in a hospital. She appears not far from death. Her devoted nephew visits regularly and takes care of all of her needs. He is deeply interested in her past, especially what happened to her as a child and teenager in Germany. After a halting start, the author carries us back in time to her adolescent years in 1932 Berlin.

Young Sophie is a bright, inquisitive, artistic, and sexually articulate 14 year old living in Berlin with her detached mother, ambivalent father, and autistic young bother. She dreams of becoming an actress, cares deeply for her nonverbal and anxiety-prone brother, sexually desires her teenage boyfriend, and fights with her distant parents regularly. Her family is Christian, but not very devout.

Sophie soon finds herself attracted to her enigmatic elderly Jewish neighbor, Isaac Zarco. Isaac is a kind, gentle, mysterious man, consumed with comprehending the Kabbalistic memoirs of his ancestor from Portugal. Isaac believes that the secrets of life, God, and the hereafter are hidden within the cryptic writing of his ancestor’s ancient document.

Sophie is also captivated with Zarco’s erudite collection of amazing Jewish friends, most of whom plot against Nazis in a secret group called “The Ring.” The members include a charismatic troupe of former circus performers, including fascinating dwarfs and a tall, shadowy, deformed woman named Vera. The members of The Ring are intriguing, delightful and amazing characters. When a young group member who has been a close friend to Sophie is sent to Dachau, she realizes that there must be a Nazi traitor in the group. But who?

The remainder of this exciting novel follows Sophie through the war years as she falls deeply in love with Isaac, becomes a full-fledged member of The Ring, and conducts a desperate race against time to save her brother and discover the traitor.

Laden within this plot are several juicy subplots, including Sophie’s anxious relationship with her cold mother and a love-hate relationship with her father who turned almost instantly from ardent Communist to full-fledged Nazi. Zimler carefully explores Sophie’s loving relationship with her young autistic brother, Hansi. In every way, Sophie is a more devoted and empathetic parent to Hansi than her own parents have been. They are deeply embarrassed by Hansi’s autism. But Sophie’s protective love never falters. Despite his inscrutable silence, Sophie understands Hansi completely.

As time passes, Sophie begins to realize the terrible danger posed by the Nazi-controlled German government. She fears losing her best friend, Rinsi, a Jew, as well as Isaac and the members of The Ring. Sophie’s sexual relationship with a teenage friend turns sour because of his ardent Nazi views. As time passes, Sophie is drawn farther away from her parents-turned-Nazis and much closer to her Jewish friends, who are risking their lives to help Jews flee the Gestapo and concentration camps.

Zimler established himself as a successful murder mystery author during the Holocaust in The Warsaw Anagrams, in which a mysterious murder plot is gradually exposed within the infamous Warsaw Ghetto.

Here he exquisitely describes the fabric of life in Berlin as Nazis push down upon Jews until almost none remain. Zimler creates a murder mystery worthy of the great artisans of that genre. In The Seventh Gate, he ardently describes the traps of injustice upon Germany’s Jewish and disabled citizens. Although one could argue that the Holocaust offers no easier disparity between good and evil, Zimler’s character development is electrifying, and his plot rolls along ever faster into the depths of fear. Zimler wraps all of this within the cryptic veil of Jewish mysticism.

As he pours through his ancestor’s Kabbalistic documents, Isaac begins to comprehend the route that humans take on their journey throughout life and beyond, the details of which go far beyond normal Jewish learning. These secrets are made available to him only through years of extensive study of Kabbalah.

The Seventh Gate builds frustration and anxiety into a devastating and haunting conclusion. The elements of fear and death surround and invade each valiant character, made all the more lovable by their individual disabilities and charm. The Seventh Gate is gripping, consuming, and shocking.

Zimmler pushes several boundaries in The Seventh Gate. Sophie, a Christian teenager in Nazi Germany, falls in love with and has sexual relations with an elderly Jewish man. She also explores sexuality at a time and age when it was considered inappropriate.

The Seventh Gate is unforgettable. Within, author Zimler delivers taboo sexuality, prejudice, a deeply entrenched murder mystery, Judaism and the Kabbalah, World War II and the Holocaust—all wrapped within Nazi Germany’s terrifying shadow of hatred and bigotry. The reader will be haunted by these brave characters and the stirring murder mystery.