Seventeen Fathoms Deep: The Saga of the Submarine S-4 Disaster 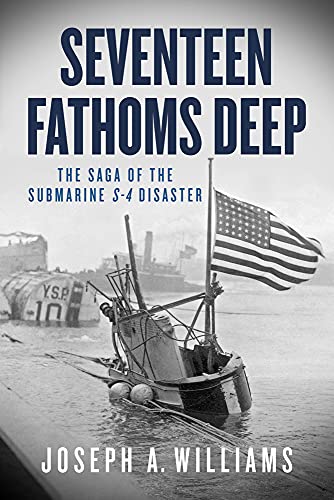 The early history of submarines is replete with examples of disasters, not terribly surprising given the limitations and newness of the technology. Just as in vehicular collisions, much of the blame can be placed on human error.

Unfortunately, in this particular instance, it resulted in the loss of the entire crew of the United States submarine, S-4. However, some good did come of it, as it usually does in the case of tragedies. Indeed, there was plenty of post-loss motivation to produce new technological ways and means for the purpose of rescuing submariners who initially survive a catastrophe and become trapped inside their boat’s hull on the ocean bottom.

In researching an unrelated project, author Joseph A. Williams stumbled upon the archives, files, photographs, correspondence, and Navy hearing transcripts of the S-4 incident. From this information, he has produced an engaging and interesting account which details everything from the circumstances of loss and the personnel involved to undersea diving and salvage and the lessons learned, which resulted in the aforementioned means of improving crew survivability in submarine disasters.

The error in this incident was largely a matter of having two vessels in the same place at the same time. The S-4 was conducting measured mile standardization trials with officers aboard, from the Navy’s Board of Inspection and Survey, off the coast of Cape Cod on December 17, 1927. At the same time, the Coast Guard’s USS Paulding, on loan from the Navy, was in the process of returning to Provincetown Harbor following a day of patrolling for rumrunners operating in violation of Prohibition. As the S-4 was surfacing, directly in the path of the Paulding, a collision was inevitable and “the impact was to be immense.”

It was feared at first that the Paulding would be lost, having rammed and then literally run over the submarine; however, it was the S-4, which sank in 102 feet of water. Hence the title: Seventeen Fathoms Deep. Although rescue procedures were instituted almost immediately, there now began a series of circumstances which ultimately precluded survivability. First, the location of the S-4 on the bottom was uncertain and had to be found and contact maintained. This was followed by the necessity of getting ships, divers, and their equipment to the site.

Initial dives determined that damage to the submarine was extensive and the only survivors contacted were six crew members, including one officer, who had managed to close themselves off in the forward torpedo room. It was a race against time as there was limited air available to these six men. Rescuers held out hope of relief to keep their spirits up but it was at this point that Mother Nature stepped in and created conditions in the form of a storm which forced divers out of the water. By the time the weather calmed sufficiently and divers could return to the sub, there was no longer any response from the survivors and it eventually became a salvage operation.

A winter-time vessel recovery and salvage operation is not standard Navy operating procedure but was accomplished by March 1928. The crew’s bodies were removed and hearings were later held to determine how this tragedy occurred and any disciplinary repercussions in the way of fault. Shortly thereafter, technology was developed which, in the future, would improve survivability and escape from a sunken submarine. The two most effective devices were the one-man “breathing lung” invented by Charles Momsen and an air-filled diving bell which could be affixed to a hatch on the deck of a submarine and return surviving crew to the surface. The lessons learned from this incident led to the survival of countless future submariners, particularly in World War II.

Space limitation precludes summarizing the controversy, conflict, public drama and cast of characters, including a future Chief of Naval Operations, Ernest J. King. However, the author has included all of these facets in the text, weaving a story of heroic effort and tragedy which was remembered and memorialized for years afterward by the Navy, the crew’s families, and the citizens of Provincetown.

The book’s text is interspersed with numerous photographs of both vessels and many of the persons mentioned in the story of this tragic loss. Although the author consulted many and varying sources of information, do not look for traditional footnote citations. The notes in back generally tend to list only the archives, files, and other documents used in a chapter and are not specific to facts or information in the text. Do not let this deter you from reading this volume as there is considerable detail to maintain interest as the story plays out.

As this incident has essentially passed from memory, Joseph A. Williams, a deputy library director, has rescued it from obscurity and presents a human interest story that also depicts the lessons learned and the good that can result from such a tragedy.