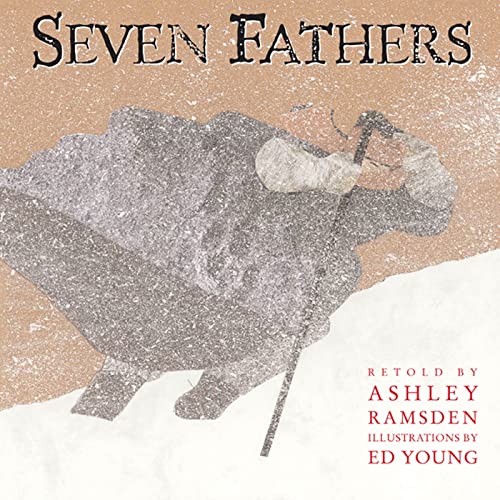 Late one winter night, a weary traveler trudges through a fierce snowstorm. Just as he feels he can go no farther, he spies the blazing lights of a house in the distance. He might yet survive—if only he can cross the frosty meadow and find a warm, dry place to spend the night.

Outside the house, the bundled-up walker finds an old man chopping wood and approaches him to ask: “Good evening, Father. I’m so glad I found you. Would you, by any chance, have a room where I could spend the night?” Such a simple question would normally lead to a simple answer, right?

Mr. Ramsden, however, has staked out a wilder territory in his first picture book. He bases Seven Fathers on a lesser-known Norwegian folktale collected by the famous folklorists Asbjornsen and Moe (Norwegian Folk Tales. Reprinted by Pantheon, 1982.) Founder of the International School of Storytelling in Sussex, England, and co-author of a book on storytelling, Mr. Ramsden’s narrative powers are in full force here. His finely honed prose is studded with the repeated question that propels the tale into an increasingly strange landscape. Along the way, Mr. Ramsden traverses multiple levels of meaning, crafting a tale especially appealing to older children of a philosophical bent.

The traveler’s respectfully worded question meets with the same odd response each time: “I’m not the father of the house. You’ll have to ask my father.” Six more times, he must seek another man, each one somehow older than the other.

The bizarre nature of the man’s quest flares to life with Ed Young’s unique collages, laid on clay-colored paper throughout the book. The illustrator ushers us into the story with snow-spattered scenes, the protagonist roughly outlined in thick black ink lines.

Mr. Young, a Caldecott Medalist, intersperses splotches of paint and simple drawings with an intriguing range of cut paper. As the protagonist warms up a bit, we get to see his face, drawn with a few black lines, peering out of his thick white hood, all the while keeping on his fur mittens. Mr. Young’s approach is minimalistic yet expressive, as in his depiction of the second father, his hair white-scrawled and his cheeks pinked by a fire the illustrator has built out of flame-looking scraps of paper.
On and on the traveler goes, penetrating further into a world where time has become elastic. As each father gets older, it becomes difficult to hear and, eventually, even to see him. The sixth father has shrunken so small he fits in a cradle. Yet even he tells the man he must go and ask that question to his father. The story goes on to explore the symbolism of the question and its satisfying conclusion.

While younger children might not grasp the implications of a spiritual quest, they will understand the folktale’s message of respect for elders and the importance of perseverance. For those seven and older, Seven Fathers offers a folktale brimming with subtle humor and mystery fresh as new-fallen snow.