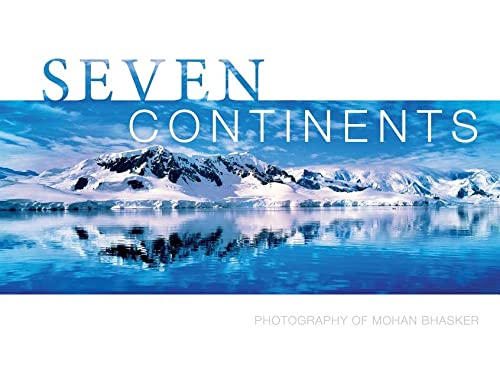 Mohan Bhasker is a physician in Los Angeles as well as a nature photographer of artistry and daring. He has just released Seven Continents, a stunning book exhibit of over 220 of his photographs taken over 15 years in his quest to document some of the most austere, as well as magically biodiverse, regions on the planet.

Bhasker’s subjects are terrain, conditions, botanica, atmosphere, and inhabitants, highlighting not incidentally the ecological strength and delicacy of our planet. He includes some captivating accounts of many of his photo junkets, and if there is one criticism of the book, it's that he doesn’t make a full log of his expeditions.

Meanwhile, the photographs are full of luminous and raw beauty, transporting images in such settings as the blue mountains of Australia where the cliff ridges pierce strata of clouds to secreted areas of Nepal, Tibet, Laos, Argentina, and even in the U.S., in mostly untouched locales.

Bhasker’s panoramic scope often reminds one of the cinematically epic lens of David Lean. “The challenge that I often face is trying to find that perfect image that grabs not only my artistic vision but also provides me with an emotional connection with nature. When I encounter this vision, I know I have captured the perfect aspect of harmony.”

Bhasker writes in the book’s introduction that his aim is shooting the weather, and in many cases that means the light itself and its interplay with the landscape.

In many instances he returns to a site because he can’t get the shots he wants. On the Tibetan peaks at Yading, Bhasker starts at 2:45 a.m. to reach the vantage point at the precise moment to record the startling sunrise, which hits the ice peaks and gives the illusion that they are on fire. Still it is only luck that has him positioned for the moment the light breaks through clouds on the fourth day.

He returns to the Sertig Valley in the Swiss Alps after he shatters his camera on the first expedition to shoot the flower fields he calls “Monet’s private gardens;” indeed, his field study is a kaleidoscope of rare natural colors. Many of the photographs have a painterly quality achieved in the field, not by studio effects. Bhasker’s foreground, background composition, and vivid colors are studies in landscape and its ephemeral naturalism.

At Phrom Thep Cape on Phuket Island in Thailand a sudden storm threatens his shoot, but Bhasker remains in place through the raging storm, then is able to record the spectacular sea and coastline sunset before the moment, he writes, when “magic appeared” then was gone. He journeys to the top of Mount Everest to study the panoramic vistas in hi-def breathtaking detail.

The shoots from the Arctic Circle are studies of ice cathedrals and oceanic mirrors, also revealing the esprit of a quartet of penguins on a chunk of ice enjoying the afternoon vista. Later, at the other end of the world In South Georgia the southernmost island before reaching Antarctica, Bhasker drops in on a colony of King Penguins and their chicks on “this crescent shaped island . . . with no permanent inhabitants. Because it lies in the path of deep atmospheric depression coming through the Drake Passage, the island has a harsh, volatile climate.”

In Antarctica Bhasker catches the blinding illumination of glacial points at sunrise, with the pale-pink misted moon hanging low in the distance.

He camps out alone overnight in a hammock to escape scorpions then to shoot the vivid reds leaf branches that overhang a short waterfall in Argentina; the burnished reds, stony grays, and misted whites are a collage of mutating colors schemes.

In Kenya Bhasker tracks the migration of the wildebeest, zebras, and gazelles to the grasslands of Mara: “the air carried the smells, dust, and sounds of hundreds of thousands of animals.” and “I was fortunate to witness the lion king in all his glory, stalking attacking, killing and consuming his prey. The zebra, however, did not go down without a fight.”

This handsomely produced volume has many landscape-oriented prints over two pages with excellent low-gloss plate transfers by Schiffer Publishing. The final section of the book features dancers in the deserts of Mongolia, a hookah salon in India, fisherman in Laos, and otherwise stunning natural portraits. Hope there is a sequel.