Set the Night on Fire: L.A. in the Sixties 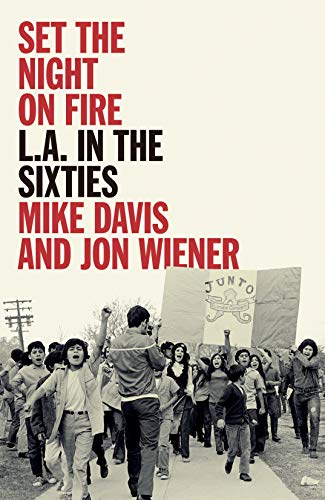 Political historians Mike Davis and Jon Wiener chronicle the civil rights movements that emerged in Los Angeles during the 1960s in Set the Night on Fire. Despite the image of California as a mecca for progressive thinking and the hope of a pluralistic society, L.A. was a crucible of entrenched racism, culture wars, economic inequality, corporate greed, and political malfeasance. Written with journalistic urgency the authors paint a scathing portrait of a corrupt city politics and police state tactics unleashed on anyone who challenges their authority.

In the ’50s, Los Angeles county became known for alternate lifestyles of beatniks, rebels, and laid-back sensibilities and Hollywood magic typified by the surf culture of Venice Beach. But by the ’60s L.A. was increasingly under the iron grip of a corrupt city hall under the police state tactics unleashed by notorious LAPD chief William H Parker and Mayor Sam Yorty, who wielded seditious power over the city and its redistricted burbs.

Many citizen activists were inspired to fight for social change by the African American civil rights strategies of the NAACP, CORE and the leadership of Dr. Martin Luther King. The freedom fight of black America moved on from the We Shall Overcome marches to Malcolm X’s manifesto to exact direct-action racial justice “By any mean’s necessary.”

By 1965, when the cops assaulted a black driver over a traffic violation the incident escalated into a violent confrontation that included a police attack on a black pregnant woman, ignited the Watts riots that lasted for five days, and resulted in 35 deaths and the torching of the area’s exploitative white-owned businesses.

Wiener and Davis rescue a lot of previously ignored history with an incisive investigation of L.A.’s minority high school student protests in underfunded and criminally neglected schools in minority districts; it is an essential rescued history, a shocking expose on racist school administration and faculty that was part of the systematic city scheme to create underclasses.

Minority educators and community leaders were shut out, many fired or arrested for supporting or helping organize the “Blowouts,” organized walkouts by students that brought awareness of racist white administration and faculty members. Davis and Wiener revisit the many crimes of the police that resulted in the deaths of young activists.

They also detail the fights of oppressed Mexican American, Chicano, Hispanic, and Latinx communities and their activists’ movements that also were being strong-armed by the police and city government.

The anti-nuclear war movement Women Strike for Peace (WSP) started in L.A. by hundreds of mothers in California joining together to fight against nuclear testing, in the name of their children. Within two years, WSP was an international consortium of women in the US who bypassed politicians and traveled to women in Japan, Vietnam, and Russia to confront regimes around the world over freezing the arms race.

By the mid-’60s the anti-war movements were out in full force across the US, and college campuses in L.A. county were epicenters of resistance movements.

An activist chapter of the L.A. Quakers provided sanctuary to conscientious objectors, but also anti-war activists who burned their draft cards and even soldiers who were AWOL.

The LAPD attack on 10,000 protesters against the Vietnam War—multi-generational, multi-racial, and with many families participating—was turned into a riot by police brutality on a peaceful march.

Weiner and Davis condense a lot of local history and some chapters are more comprehensive than others, but throughout the book the detailing on little knowns aspects of the socio-political landscape of L.A. vis-à-vis, the rest of the country brings penetrates the same tropes of generational perspectives, racial divisiveness, sexual mores, and culturally divisive ’60s.

Always overshadowed by the cultural flashpoint of the Stonewall Riots in New York, the authors chronicle the often lost history of L.A.’s LGBTQ+ protests in L.A., in 1967, that started at the Black Cat bar and led to a resistance movement by gays and lesbians in Los Angeles to stop LAPD shakedowns of gay bars, routine round-up, and violence against the gay community.

Some of Set the Night on Fire is overreaching. The chapters that cover the burgeoning new feminist movement and Asian American organizations, for instance, seem to get short shrift in this volume. But for the most part, this is a stunning history of a defining time in L.A. of everyday Americans, and the many unsung minority heroes who put themselves on the line for civil rights and equal treatment.

The country’s first public-supported radio station was L.A.’s KPFK PBS FM radio station that had classical music, jazz, folk, and cultural programming across the spectrum of arts and interests. The station’s broadcasters were dragged in front of Congress and the FCC for their equanimity in broadcasting. They were key in covering the growing civil unrest in L.A. and reporting on social justice causes and activism. Meanwhile, the L.A. Free Press (Freep), was the first alternate newspaper weekly, that rivaled the ultra-conservative L.A. Times.

The authors do an exhaustive investigation of the infighting and fractious turf wars of all of the major activist organizations. There are also condensed bio-histories of leading civil rights activists laced through the book from Angela Davis, Eldridge Cleaver, Daniel Berrigan, Sister Mary Corita, Cesar Chavez to many others lesser known luminaries equally important to their chosen civil causes.

As Wiener and Davis conclude in their Epilogue, the ’60s movements are part of the DNA of American civil rights activism, generations since have been inspired by the courage that citizens ignited in the City of Angels six decades ago.