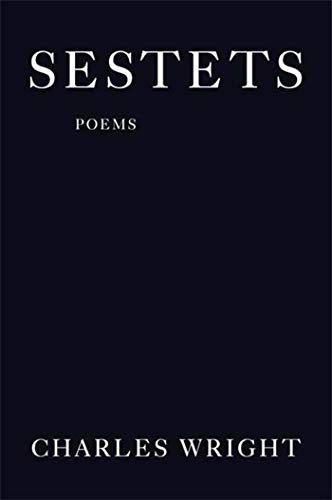 That these poems are so simple to read is an indication of the labor and talent that went into writing them. To develop, in the space of a mere six lines, the level of imagery and intimacy that exists in each of these works is truly the measure of this Pulitzer Prize-winning poet. Wright, a professor of English at the University of Virginia at Charlottesville, is the author of nineteen books of poetry as well as two books of criticism and two translations. He won a National Book Award in 1983 for Country Music: Selected Early Poems and a Pulitzer Prize for Poetry in 1998 for Black Zodiac. He is truly an American treasure. In Sestets, the opening line of the first poem sets the theme for the entire collection: “The metaphysics of the quotidian was what he was after.” These are poems of everyday life, of his life. Wright uses the familiar features of his environment to meditate on life and death, happiness and despair. The change of seasons is the march of time while the seemingly eternal presence of the trees and the pond call up the fleeting moment that is our human existence. Wright cleverly inverts his tropes to question the very nature of poetic description and is at times even more blunt in his assessment of the place of his craft in the world: “Ah, description, of all the arts the least appreciated.Well, it’s just this and it’s just that,                                       someone will point out.Exactly. It’s just this and it’s just that and nothing other.            From landscape to unsuppressed conjunction, it’s only itself.           No missteps, no misreading.                                     And what’s more metaphysical than that,           The world in its proper posture, on all fours,
drinking the sweet water.” This poem sits thematically at the center of the collection. The world is, says Wright, what it is. The minutiae of day-to-day life are just what make the magic. It has been said that the devil is in the details. Wright, in this collection, asserts that so too are our own personal gods and angels. Sestets is not about religion or finding God, it is about the godly and marvelous that exist in our everyday world. While there are dark moments among these works, the overwhelming perspectives are those of hope and positivity. Wright has been around long enough to understand a bit about the world, and he sees that it is not so bad after all. There is joy in the smallest things. There is pleasure in the ritual of the seasons, of the phases of the moon, and of the migration of the ducks of his pond; “Unlike despair, happiness knows no final answer.” There is much to love in this wonderful collection. The works are full of hidden depths and meaning, yet they are clear and accessible. In his use of language and imagery, Wright has found the quotidian that he was after in the first poem. The world is his subject and his life’s work. All things are in Wright’s poems. Reviewer Phil Constable is a technical writer, document designer, and editor who has written on such authors as John Fowles, Graham Swift, William Golding, Graham Greene, and Kazuo Ishiguro.