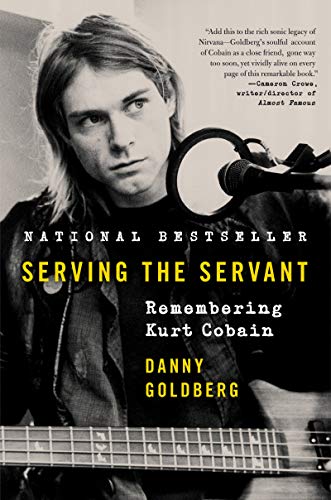 “As a biography of a towering musical figure, Serving the Servant is a fascinating read for anybody with even a passing interest in Nirvana. It stands to be the most widely read of the Cobain biography books . . .”

If Serving the Servant: Remembering Kurt Cobain brings us any closer to Kurt Cobain, it is through a mutual admiration for the musician and for the reflection Danny Goldberg’s memoir/biography provokes. The book does not shed much additional light on the sometimes morose, often jovial Cobain in any significant way. But then could any work pry into that heart-shaped box?

As Goldberg says of Cobain, “[T]he best I could do was see him through a glass darkly,” adding “there was always a side of Kurt that was hidden.” However, Goldberg’s book offers a valuable perspective as it documents Goldberg’s memory of Cobain from roughly the recording of Nevermind until Cobain’s death four years later, a period when Goldberg served as Nirvana’s manager.

The book opens in late 1990 when Goldberg meets Cobain, and in tight, thematic chapters the author follows Cobain until his funeral. The brisk narrative arc pulls the reader along from the explosive launch of Nevermind, to meeting Courtney Love, to heroin, to Incesticide and In Utero, to MTV, and then, sadly to suicide, which Goldberg details and maintains is the only reasonable explanation for Cobain’s death, despite the efforts of a fervent investigator and the general disbelief of grieving fans who advocate Cobain was murdered.

A few nuggets of interest include Cobain’s antagonism toward Pearl Jam and the grunge scene that emerged in Seattle at roughly the same time as Nirvana’s rise. As Goldberg presents it, Cobain’s dislike of the band and the movement was rooted to Cobain’s punk-aesthetic, which shunned obvious appeals to popularity and to the “grunge” label in general. Cobain “was not okay with the idea that Nirvana was merely part of a trend,” Goldberg writes.

Similarly, Goldberg recounts Cobain’s hate of Guns ‘n Roses and especially Axl Rose and his misogynistic and racial stances. Serving the Servant reiterates this disdain as emblematic of Cobain’s core values and his championing of feminism and LGBT issues—things that Rose and crew shied from and even disparaged in their songwriting.

And then there’s Courtney Love, the ever-controversial figure in Cobain’s life. The Vanity Fair piece that almost derailed Cobain’s image, painting him as Love’s heroin puppet, receives a full chapter treatment in Serving the Servant. Goldberg blames Love for “animatedly chatting” with journalist Lynn Hirschberg, and he blames Hirschberg for a lack of intellectual honesty in quoting “friends” and “people in the business” and taking “such gossip at face value.” But the piece’s publication was “a crisis” that especially put the couple’s parenthood over the pending birth of Frances Bean at grave risk.

The article also “contended that Courtney was responsible for Kurt’s drug problem,” a position that persists and is usually fueled by the conspicuous timing of Cobain meeting Love and simultaneously engaging in destructive heroin use. Goldberg shows Love as a concerned spouse who cleaned up to be a mother. And did Love turn Cobain onto heroin? “Definitely not,” Goldberg asserts. “Kurt always said that he had tried it repeatedly when he was younger, and a number of his old friends concur.”

Goldberg calls upon Novoselic for support, too: “Kurt loved heroin,” Novoselic says. “He loved the way it made him feel.” Whatever the truth, the feud between the couple and Hirschberg escalated with lawsuits and with high school behavior from Cobain and Love who repeatedly called the journalist, leaving hateful voice messages and with Cobain even considering including liner notes in Incesticide “about the evils of Lynn Hirschberg.”

When Goldberg addresses Cobain as an artist, the takeaway is Cobain’s dominating role and “clear vision” in driving Nirvana as a musical sensation. Writing about the “Smells Like Teen Spirit” video, Goldberg shows Cobain revealing his video concept to an accomplished A&R team who Cobain “had never had a meeting like that with;” astonishingly, an agreement is made for Cobain to draw up the storyboards that soon find the video director Robin Sloane “dazzled by Kurt’s creative clarity.”

“What distinguished Kurt from every other artist I worked with,” Sloane says, “was that he always had one central idea,” or as Goldberg rephrases: “He knew exactly what he wanted.” The motif of Cobain as an artistic genius recycles throughout several narrative episodes within Serving the Servant, underlining both Cobain’s decisive musical vision and Goldberg’s high esteem of Cobain.

However, this leads into one of the uncomfortable portraits provided by Goldberg and Serving the Servant: that Nirvana was Cobain. Early on even Thurston Moore, Sonic Youth guitarist/singer and fan of Nirvana, sensed that bassist Krist Novoselic and drummer Dave Grohl “were starting to feel a little distant from Kurt.” “This guy’s doing all the creative work,” Moore states; Novoselic and Grohl are “just playing.”

While Novoselic provides several quotes throughout the work and helps support Goldberg’s memory, Grohl is conspicuously absent and is only present in necessary scenes (where the band is performing) or is occasionally mentioned in a phone call to Cobain, perhaps uncannily symbolic of that distance. So a question looms for Nirvana fans and readers: Why doesn’t Grohl provide any quotes or primary source material to Goldberg? The reason may be innocuous, but Grohl’s absence in a biography about Cobain and, necessarily, Nirvana, is noticeable. And ultimately, Goldberg’s work reinforces a Cobain-centric view of Nirvana.

As a biography of a towering musical figure, Serving the Servant is a fascinating read for anybody with even a passing interest in Nirvana. It stands to be the most widely read of the Cobain biography books but will unlikely serve as the definitive work. The mythic stature of Cobain is too great for a single work to absorb, and Goldberg’s relationship keeps him at a distance from Cobain and also points to his own financial investment in the Cobain image. But Serving the Servant, a clever play on one of Nirvana’s notable songs, is a fast-paced, quick work, making it an engaging and highly enjoyable read.