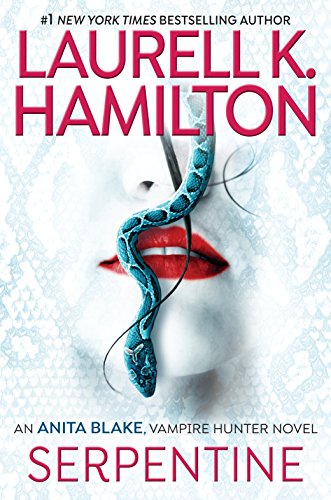 “. . . begins with a good premise that dissolves into a disappointment . . .”

US marshal/vampire hunter Anita Blake with her entourage of lovers/fiancés are on their way to a Florida island for the wedding of fellow US marshal and friend Edward. The journey is fraught with uneasiness because Dixie, one of the wedding party, continually tries to make the bride, Donna, call off the wedding by accusing Edward of having an affair with Anita.

During the trip, Anita is asked by lover Micah, head of the Coalition for Better Understanding Between Human and Lycanthrope Communities, to assist a family of shifters who change into snakes—not simply one snake, but many at a time, emerging from head and limbs, Medusa-like.

“Most of them seem perfectly human at first, then they start manifesting this change in early adulthood. They want help. They want a cure.”

After their arrival, Anita meets one of the family and witnesses the transformation first-hand but any aid she can offer is sidetracked when Donna’s interfering friend strikes again. This time, Donna’s son ejects Dixie bodily from the group only to find himself stabbed by the vengeful bridesmaid. While he’s recovering in a hospital bed, she charges him with assault.

The detective assigned to the case seemed extraordinarily hostile and determined to arrest someone in the wedding party. Anita thinks he may be a paranormal of some kind. After that a woman disappears and her mutilated corpse is found, and Donna’s daughter is abducted.

If something isn’t done soon, a funeral march may replace the wedding anthem.

This novel will be of interest to only the most diehard Anita Blake fans. The rest, who will no doubt be hoping for a story about Medusae or snake-shifters, are going to be very disappointed.

Though the blurb for this novel as well as the cover purport to be about humans taking serpent-form, there is scant mention of that particular supernatural creature when measured against the length of the novel. They are referred to in the first chapter, and again when Anita meets with a lamia about a hundred pages later, again when one of the family members actually transforms about midway the story, then again near the end of the book. A brief confrontation ensues with an even briefer sweep-it-all-under-the-rug summary of an epilogue, and that’s it.

The majority of the 496 pages centers mostly on Anita and her group, their sexual encounters and suggestive dialogue, with some rehashing of events from other novels and more invectives from Dixie, whose reasons for Donna to jilt Edward rise to the absurd. There’s also a little detective work thrown in when the women are abducted.

Because of its length and lack of narrative on the title subject matter, this novel begins with a good premise that dissolves into a disappointment no doubt reminding the reader why he stopped following this particular fictional character only to be lured back by an intriguing book cover.