Seriously, You Have to Eat 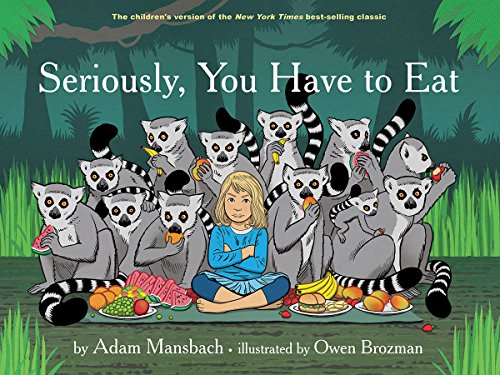 Author Adam Mansbach calls his international bestsellers Go the Fuck to Sleep and You Have to Fucking Eat (both reviewed in NYJB) “obscene fake children’s books.” The inspiration to publish kids’ editions of the stories evidently came from his discovery that parents were reading self-censored versions of them to their children.

Both of the “obscene” versions are hilarious. Mansbach chose the perfect medium to capture the normally repressed thoughts, however fleeting, of countless well-meaning but exasperated parents. To discover one’s most uncharitable feelings in a picture book (emblematic in and of themselves of good parenting), and at the end of what at first appear to be stereotypically warm and fuzzy rhymes, produces a thoroughly cathartic laugh. For example, from Sleep:

The eagles who soar through the sky are at rest

And the creatures who crawl, run and creep.

Lie the fuck down, my darling, and sleep.

The sunrise is golden and lovely,

You woke me and asked for some breakfast,

So why the fuck won’t you eat?

The children’s versions of these fake children’s books are essentially the same with the profanities removed. Thus, the corresponding page from the new Eat:

The sunrise is golden and lovely,

You woke me and asked for some breakfast,

So why in the world won’t you eat?

This version is certainly not hilarious anymore—at least from a parent’s perspective. But because every verse ends with a thwarted (if not apoplectic) adult, children are bound to find it entertaining. It may very well be cathartic to kids to read about children winning battles they probably most often lose themselves.

However, not all of the (sometimes awkward) verses translate equally well. For example: “But seafood is dicey, we’re leery of meat/Half the food at the market is really quite scary/But guess what? You still have to eat.” In the adult version, the fact that the child being addressed is not likely to understand most of this makes if funnier. Here, it seems problematic.

Owen Brozman’s art is not problematic, but nor is it inspired. The illustrations are pleasingly colorful, but their flatness and apparent simplicity gives them a clip art-ish feel. And despite the inclusion of wild animals in unexpected places (like a restaurant) they feel, for the most part, humorlessly literal.

But while neither Seriously, You Have to Eat nor Seriously, Just Go to Sleep are laugh-out-loud soul-cleansing surprises like their “obscene” counterparts, both should nonetheless prove popular. Parents and children alike will surely welcome a pause to bond over a shared recognition that their endless battles are not theirs alone—before they get back to them.