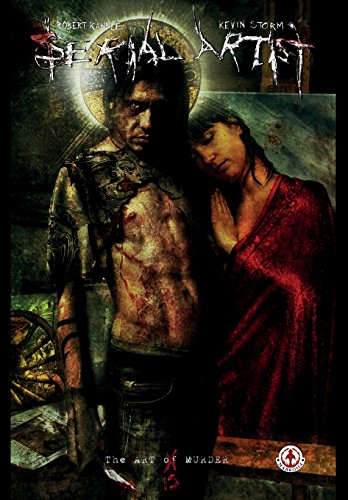 “A crawl through the wreckage of modern society and life, Serial Artist fascinates, repels, and moves the reader with each panel.”

Serial Artist is more than a standard graphic novel, it is thunderous, explosive noise on paper—thoughtful, literate, cacophonous, irksome, beauty as disease, squalls of feedback as the opening into Jean Genie by Bowie noise.

With layered, complicated art that shimmers with beauty and hidden delights, Serial Artist is a brutal but still very delicate take on modern media, the artist, the audience, and the powers that hide in proper daylight.

An artist has gone viral with paintings and drawings that feature the body (or body parts) of victims that he may or may not have murdered himself. As he lives in isolated comfort from the profit that his website creates for him, as well as the astronomical prices paid for the actual paintings, the Serial Artist mines the attention for all it is worth.

The 24-hour news channels go wild for his antics. Those who are convinced that he actually murdered a loved one picket his apartment in the sky. Religious groups attack what he says and stands for.

Old friends doubt his sincerity, claiming they know that he is engaging in a deliberate ruse while sycophants and fans line up to be abused. Or even worse, his next possible victim. The gallery that the Serial Artist sells through rakes in record setting prices for his work.

All of this happens while the FBI works around the clock to put the Serial Artist behind bars.

What keeps our attention throughout it all is that Mr. Randle anchors the narrative, one not far removed from the possible in today’s world, to a template of conventional storytelling. As much as the art propels us in a somewhat unconventional direction, he keeps us engaged with the recognizable.

There is a reporter sucked into the exhibitionistic world of the artist. The FBI agent on his case becomes obsessed and moves into his own world of belief. The roommate and once best friend of the Artist is recruited to possibly become the Judas.

We know these people. We have seen them in the skimpiest of outlines and clichés on TV procedural crime shows.

Where those shows work from the shorthand of stereotype and the familiar, Mr. Randle moves the reader into a much deeper place, one filled with philosophy, debate, greed, exploitation, and real consequences. His time line, jumping from one era to another and sometimes doubling back while jumping into a third, never loses its cohesiveness. He trusts us to follow and as we do, the challenges make the rewards that much richer.

The art by Mr. Storm is, like the subject matter of the Serial Artist, alternately thrilling, uncomfortable and frighteningly beautiful. The convention of the traditional allows him and Mr. Randle the room to experiment grandly.

Where a traditional graphic novel moves through hand-drawn panels, Serial Artist utilizes altered photographs featuring actors. Working with Photoshop as his palette, Mr. Storm gives us a movie in frame by frame.

Among other advantages this allows him to layer a single page on top of another page of images, each level reinforcing the meaning of the other while also opening up the story on both a metaphorical as well as a physical level.

At one point the Serial Artist fears being shot in public. He outlines how his attacker will be a killer that can’t be traced back to those who really want him dead. Underneath the story are the slightly out of focus images of Oswald being shot by Ruby. The idea of a patsy as executioner for the powerful becomes more powerful and real.

One of the most striking images comes early in the tale. The Artist’s companion stands stubbornly in the snow while he sits inside a car begging for her to return. As with many memories, the scene occurs through the slight fog of both selfish rationalization and the distance of time.

The details in the panel aren’t sharp, but the effect of the image is chilling as well as deeply touching. Especially for anyone who has been disappointed in love or had to distance him- or herself from someone once beloved.

We have all been either inside the car or standing outside of it. Mr. Randle and Mr. Storm help us to feel such empathetic moments frame by frame. This ability to touch the reader is one of the main reasons everything holds together so easily.

Some will find the story’s occasional dip into the grotesque hard to handle. The depictions of S&M, the cuttings, the exhibitionism, the verbal assaults, the diatribes that alternate between being insightful and being sophomoric ramblings of the deluded—this is all integral to the story. Nothing portrayed is done for shock; it is all part of life.

Many of these things are part of the world around us that many choose to never see much less acknowledge. The amazing thing is that for all the tough imagery and tough-man dialog, the violence and the hurt, the story is about the most basic thing in life, love.

It is about being lost in the noise of the world around us.

There is a good amount of humor rippling throughout the story. The pretensions of the art world are only made more ludicrous by the hypocrisy of so many of its participants.

Those same qualities are also true of the general media. Each and every side stands revealed as fools—fools with grand intentions, but fools nonetheless.

A crawl through the wreckage of modern society and life, Serial Artist fascinates, repels, and moves the reader with each panel.