A Separation: A Novel 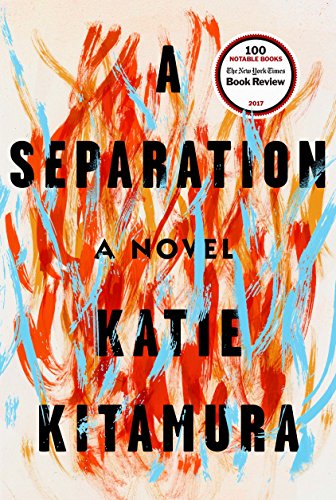 Katie Kitamura’s A Separation begins with a young woman embarking on a trip to Greece. She has been ordered to travel there to search for her husband by her domineering mother-in-law, Isabella. What Isabella is not aware of is that the unnamed narrator has in fact been separated from her husband Christopher for six months, and she has only agreed to the trip in order to ask him for a divorce. Christopher, a writer of some renown, is apparently undertaking research on the remote Greek fishing village of Gerolimenas; however, when his wife arrives, Christopher is nowhere to be found, and the narrative takes an unexpected twist.

The remote village has been ravaged by summer forest fires, and it is against this background that she evaluates her failed marriage, and the nature of romantic relationships in general. The narrative voice is cool, guarded, and curiously measured on affairs of the heart, while delivering crisp observations on the lives and loves of those who visit and work in the hotel. Observations such as the one below sums up her view of relationships:

The blurb of this much anticipated novel informs the reader that she “discovers less than she thought she did about the man she used to love” through a “searing, suspenseful story of intimacy and infidelity.” Yet intimacy is precisely what this novel lacks. We are merely told, for example, by the narrator that Christopher was a serial adulterer. Bizarelly, while his caddish ways are mentioned often, we are never given any description of the emotional fall out from this experience, only told that this is the reason their marriage ended. For a novel about love and betrayal, it is curiously bloodless, giving almost no insight into the particular details of their relationship.

It is, of course, a narrative device intended to ramp up suspense and our curiosity, but as there is no genuine reveal or narrative pay off, it is frustrating and ultimately means the characters and scenarios don’t quite ring true. Playing detective, she analyzes an advertisement for infidelity management services which Christopher has circled in a newspaper, and a folder of pornographic images on his computer. In the hotel, she imagines his seduction of a young woman:

“The images came easily, I knew the ways of one half of the coupling, and it took very little imagination to see the rest. I could remember—with a dispassionate eye, it had happened long ago—Christopher’s way of approaching a woman, of entering her consciousness, he was very good at impressing himself upon a person.”

From these passages we get no sense of the pain inflicted by infidelity, or the sexual dynamic of the couple, meaning the narrative voice is always distant. It is a more successful dynamic for delivering enlightening observations on universal human behaviour than giving any insight on the inner lives of Kitamura’s characters:

“I waited for her to continue and wondered if she had sat in this restaurant, perhaps at this very table, with Christopher. She might have ordered the same lobster appetizer, he would have appealed to her appetite, to her desire for carnal satisfaction, encouraging her to be expansive.

“Once a woman is behaving in a way that is other to herself, once she is acting in a manner out of the ordinary, unlikely things become possible, and that is half the task of seduction.”

Kitamura has no shortage of famous admirers—Knausgaard is apparently a fan and on this novel’s cover, Salman Rushdie compares her to Coetzee and Gordimer. The Coetzee comparison is a good one. In A Seperation, she has the same knack for conflating inner turmoil with the chaos of the surrounding landscape that Coetzee displays to such devastating effect in his best work. The hotel is situated in a rurally isolated and economically depressed area, still reeling from multiple forest fires, and the American protagonist observes the local people through a cab window.

In one scene she visits a local “weeper,” an elderly woman employed to mourn at strangers’ funerals, a custom still observed in the local area but diminishing in Greece generally:

“I felt at once the extent of my deception: I was not writing a book, I was not researching the ritual of mourning, there was nothing I could learn from her grief, whose authenticity I did not doubt. Notwithstanding the fact that it was a performance, essentially on demand, the entire situation a fabrication. And I understood that this was why she was paid, not because of her vocal capabilities, not even for the considerable strength of her emoting, but because she agreed to undergo suffering, in the place of others.”

The weeper is employed to feel pain by those that are not able. This obviously resonates to some degree with the character’s repressed nature and ties in with later points in the plot. There are interesting ideas here, but the author’s character and themes fail to make the desired impact. Kitamura is obviously a sophisticated and talented writer. She is at her best when her characters trigger larger, more philosophical observations around human behavior, which often ring true. But her uninspiring narrator ultimately makes A Separation a curious yet frustrating read.