Sent to the Devil: A Mystery 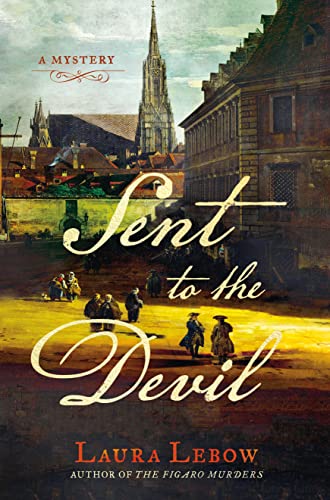 “a fascinating window into European history and a murder mystery that is riveting right to the end.”

“You searched my room, you suspect me of murdering five people, all on the fancies of a silly young girl? I believed I knew you, Lorenzo. I had the impression that we shared the same sentiments and ideas. You! Working for the Ministry of Police! What a ridiculous idea do you have about me? That I am part Turk, so I must therefore be a bloodthirsty monster?” —Erich Strasser, Professor

In 1788 Vienna, Court Poet Lorenzo da Ponte is enthusiastically completing his libretto for Mozart’s opera, Don Giovanni, when da Ponte’s close friend within the church is murdered. Soon after, additional members of Vienna’s church and pillars of society are murdered in a similar manner, with a coded-message engraved on their foreheads relating to Dante’s Inferno. The similarities are shocking. Someone is murdering well-known aristocrats and clergy, charging them with possessing the seven sins of Dante’s imagination—and da Ponte receives enigmatic messages about each victim’s sin before their gruesome murder.

The murderer delivers clues to his plan, but Lorenzo struggles to comprehend them. The court of the Emperor requests that da Ponte join a small taskforce to resolve this dreadful series of murders. Despite clues that point to various individuals, da Ponte remains the resolute, independent investigator.

Lorenzo eventually agrees to serve as bait in order to catch the murderer. Walking through a dark, deserted Viennese courtyard in the middle of a foggy night, Lorenzo’s heart is pounding. The murderer springs his trap and places a knife at da Ponte’s throat. Where are the police who are supposed to be here, wonders Lorenzo, as he fears his last breath has arrived?

Author Lebow paints a vivid description of Vienna, based upon very solid research. The reader is treated to a likeable and sympathetic protagonist, from whose first-person perspective the story flows smoothly. All of this is wrapped up in the affluence and beauty of the emperor’s court, the lavish lives and estates of counts and barons, as well as the beauty of Vienna’s music and opera.

The reader is occasionally treated to brief engagements with the legendary court composer Wolfgang Mozart, his wife Constanza, and the illustrious court composer and opera director, Antonio Salieri. While not an important part of the murder mystery, this serves as a special treat.

The author simultaneously delivers grisly murder scenes as well as the beauty of Vienna and its aristocracy. She even includes a passionate love story between our intrepid protagonist and a mysterious woman who suddenly arrives in Vienna to claim an aristocrat as her husband. That man later becomes one of the murder victims. The reader is lured with a wide range of potential villains and victims via a storyline that remains engaging throughout.