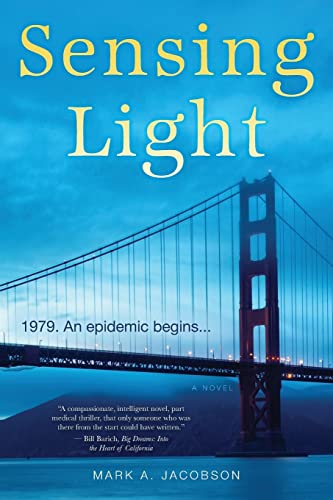 Mark A. Jacobson’s novel Sensing Light instantly takes us back to those harrowing days in the 1979 when young gay men were turning up in San Francisco emergency rooms with a rare pneumonias and cancers, unnamable infections, and a zero T-cell count to fight anything off.

First called gay cancer, then GRID (gay-related immune deficiency) by the time the pathogen HIV was discovered AIDS (acquired immune deficiency syndrome) an out of control worldwide epidemic was emerging with everyone at risk who’d had unprotected sex, shared needles, or received blood transfusions.

Jacobson’s novel weaves the story of three medical professionals whose lives are personally changed by the impact of the epidemic. One guesses that the main characters are fictionalized composites of real doctors and health care workers on those initial front lines trying to treat patients and find answers to this horrific new disease.

Jacobson was himself one of those real life doctors and, admirably, gives a sensitive account of the grim years of AIDS when there was essentially no hope to save patients. He doesn’t pull any punches, but also does not dwell on the horrors of what people faced in that first decade before there were effective any medications that could save lives. He writes about dying patients with a clinical and compassionate wisdom. His account of the harried world of medical professionals and researchers trying to get a handle on raging epidemic is thoughtfully drawn.

Kevin is an Asian American intern who moves to San Francisco to live a full gay life out from under the gaze of disapproving parents. Herb is the seasoned Asian- American supervising physician and mentor to a dedicated staff. Meanwhile, he and his wife Cecelia, a successful lawyer, are growing apart mainly because Herb is always working. They are struggling to save their marriage and be good parents. Lawyer Gwen is a dynamic clinic worker trying to juggle her time and energy as a single parent raising a teenage daughter as she returns to a higher pressure job at City Hospital to complete her residency just as the AIDS epidemic is exploding in the city.

Kevin becomes a leader in AIDS training and treatment strategies, but he has to readjust his priorities when his lover Marco, a research scientist, is diagnosed with AIDS. Later, Kevin also tests HIV-positive, and eventually develops full-blown AIDS.  Gwen and Herb rally around the couple and Jacobson’s backdrop of the relations between gays and straights as completely compassionate and positive is to be lauded.

Even in its earnest charm though, the fictional lives, families, and loves of the doctors prove a bit more narratively problematic in Sensing Light. Jacobson’s dialogue can read as soap opera-ish and his plot devices can creak at key points.

In his endnotes, Jacobson acknowledges the best sources reportage of the early years of AIDS is Shilts’ And the Band Played On and French scientist Luc Montagnier’s Virus. He said he wrote the fictive account for the benefit of his own children and his medical students and for its intent to enlighten this generation who might not otherwise know the events and the people lost to this disease.  Without doubt, Dr. Jacobson is dispensing good medicine to his readers.