Sell Yourself First: The Most Critical Element in Every Sales Effort 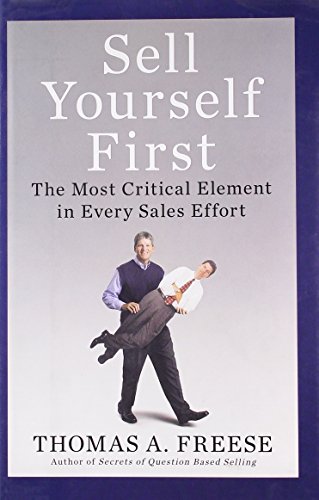 Sell Yourself First is two books in one, both good.

Freese opens with an upbeat discussion of what it means to be a salesperson, focusing on the importance of sales (“. . . if you cannot sell it with some degree of consistency, then it doesn’t matter how good [it] . . . actually is.”) and the role of the sales professional in helping people.

He segues into the importance of customer perception and writes persuasively that it’s ineffective and even tacky to bolster your credibility in the eyes of customers by overtly making extravagant claims about your product or service, your intelligence, your honesty, or your competence. Freese argues sensibly that salespeople who are strangers to their prospects—whether cold calling, coming fresh into a territory, or even taking over an established account—have no right to expect these people to open up and speak candidly about their problems, priorities, or preferences.

That’s why Freese advocates selling yourself first, not just by establishing your bona fides as a sales professional who is in a position to help the prospect solve problems or improve his or her situation, but by using what he calls “conversational dynamics” to direct the sales call onto highly productive ground.

For Freese, the most effective way to do this is to “throw your industry under the bus,” that is, to steer the conversation quickly toward the well-known problems and deficiencies in how products and services are normally sold. Rather than regale your prospects with the wonders of your product or service, Freese counsels salespeople to address “the elephant in the room” by speaking to the natural fears and concerns of the prospect, not just his or her likely skepticism when meeting a new sales person (that’s you), but also the most common negative perceptions about your industry.

By avoiding extravagant claims and directing the conversation toward honest, bedrock concerns that are likely to strike an immediate chord with the prospect, Freese asserts that you will instantly cloak yourself in credibility and expertise.

Freese also counsels salespeople to abandon what he says is the usual sales call sequence of offering your wares as solutions, then trying to elicit information about the prospect’s problems, and finally fending off the prospect’s objections, which he claims are really just questions about how your product or service compares to the competition.

Instead, he urges that you start by bringing up the most common problems your prospect is likely to face and then delve deeper into the specific issues and implications that arise in the prospect’s mind. From there, it’s logical to go over various alternative solutions to those issues, and finally to offer your product or service as the best available way to deal with those issues.

This is where Freese makes the transition from a book about selling yourself to a second book in which he lays out his Question-Based Selling approach, which just happens to be the subject of his previous books on selling, and is also the basis of his sales training courses.

Freese amply demonstrates that asking questions of your prospect—after subtly obtaining permission—is a highly effective strategy for moving the sales call in the directions you want it to go. For example, by opening with some generic fears the prospect is likely to be feeling, you put yourself in a position to ask: “Would it be valuable for me to review some of the ways you can avoid these problems?”

As the conversation moves into more collaborative territory, you cease being an outsider probing blindly for opportunities to sell and begin to be perceived as an expert (like a doctor, he claims) earnestly seeking details so you can fully understand your prospect’s situation in order to provide the best available treatment for making it better. By adroit use of questions, you consistently win what Freese calls “mini-invitations” to delve deeper into the prospect’s specific situation.

One important element within this process involves “priming the pump.” Rather than directly asking intrusive questions (“What are your primary concerns?”), Freese encourages sales people to share information first—initially about generic issues likely to be of concern to the prospect, then later within the flow of discussions on the more specific issues that come up—so that the prospect naturally feels inclined to chime in with details from his or her own situation.

But there are at least a couple of places where Freese undermines his own ideas. For example, Freese encourages salespeople to plant in the mind of prospects a “land mine” for competitors to step on, by encouraging the prospect to openly ask other salespeople about their companies. “If they jump right into an infomercial . . .” Freese suggest you warn prospects, “then you should run as fast as you can. . . .” This is such an obvious gambit that it’s more likely to undermine the credibility you’ve developed with the prospect than cause him or her to devalue the conventional sales people who make presentations after yours.

Freese also counsels salespeople to develop a “repository of potential issues and implications” that could influence a prospect’s decision about whether or not to buy, and to explicitly explore with your prospect as many of these as you reasonably can so as to create “separation” in your prospect’s mind between your offerings and those of your competition. While this is a sensible idea, Freese glosses over the possibility that your product or service may not be the winner on all these issues and implications. When it isn’t, salespeople might be smarter to exercise some selectivity about bringing up issues and implications in order to avoid making the competition look too good.

Overall, there is much of value in Sell Yourself First, from specific ideas, techniques, and even language for improving your interactions with prospects to surprising wisdom about strategies for cultivating more favorable perceptions in your prospects’ minds. Freese’s simple, logical approach to selling—based on being of service to the prospect—is likely to help any sales professional recognize the most effective path from that first knock on the prospect’s door to that all-important signature on the contract.