Self Comes to Mind: Constructing the Conscious Brain 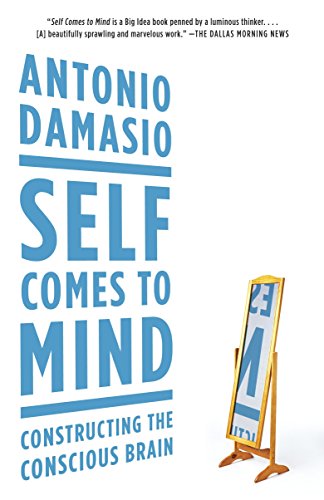 This is a very interesting book, albeit with a misleading title. Perhaps the title was a ploy to attract readers of popular science, when in fact this is a book for readers of serious science. But no harm, no foul.

The author himself is indeed a serious scientist: director of the University of Southern California’s Brain and Creativity Institute, and author of several other books in the same vein as this one. One of them, The Feeling of What Happens: Body and Emotion in the Making of Consciousness, even cracked The New York Times 10 Best Books list of 2000. And if you still doubt that he is a serious scientist, catch him at his (unsmiling) best in one of his online video presentations.

His video presentations reveal him the same way the book does: cogent, painstaking, imaginative, knowledgeable, honest, and persuasive, but not convincing. He seems to believe that the primitive brain somehow intuited that it needed to become a more complex brain, and then set out to make one, which then produced consciousness, and then a self. Sorry, but that does not compute.

But first, full disclosure: In college, I welcomed gentleman Cs in science courses. So Dr. Damasio need not fret that I might topple his carefully drawn thesis on how the self came to mind. I volunteered to review this book because its title piqued my curiosity (and fooled me); I had thoroughly enjoyed reading a book titled Proust Was a Neuroscientist, by Jonah Lehrer, published in 2007; and I’m a novelist with a lifelong interest in the self, particularly as manifested in creative writing—and, I might add, as seen in simple human observation. Who among us, when berating himself for stupid behavior, has not wondered what entity within us has the audacity to address us as “you,” as in such self-criticisms as: “You sure screwed that up” or “What in the world were you thinking?”

True, Damasio’s interest, at least in these pages, lies not in the divided self, but, as the subtitle suggests, in how the body and brain, working together, first created consciousness—and then created a self. Still I couldn’t shake the feeling that his hypothesis didn’t square with the little I knew of Darwinism—and that his hypothesis assumed a concept of the self that was alien to my English-major mind.

In an introduction to a 150th anniversary edition of The Origin of the Species, there is a passage that reads: “Experiments have shown that mutations can only modify or eliminate existing structures; they cannot create new ones.” To me, that means that the human brain, however primitive, arrived with no assembly required. Assuming a normal birth, switch it on and it’s good to go.

Early in Damasio’s books, I noted with quickening pulse his many references to the self as the brain’s “protagonist,” and surely I wasn’t the first fiction writer to discover that it is important in telling a story to find the “voice” that wants most to tell the story.

Also noted with interest (and admiration) is that Damasio’s search for answers sometimes takes him beyond the borders of science into the wilds of the humanities. He even quotes the illustrious literary critic Harold Bloom on Bloom’s provocative contention that Shakespeare invented the modern human being, i.e., the modern consciousness, in making Prince Hamlet a reflective soul whose behavior is changed by listening to his own thoughts, as in the famous soliloquy.

But Bloom’s assessment of the great English poet Robert Browning would have been more pertinent to an accurate concept of the self: “His ‘dramatic monologues’ are misleadingly named: they are subjective, lyrical antiphons in which many voices, usually dwelling in a single person, play against one another” [emphasis added].

Damasio might also have explored with profit some celebrated cases of multiple personality that seem to show that more than one whole self can co-exist in the same person—in which person there is no other sign of mental aberration, i.e., each “self” is a functional being. Is Dr. Damasio familiar with the original, clinical films of the patient whose case became known to the world as The Three Faces of Eve? Years ago, the Medical College of Georgia, where the woman had been treated, presented a showing of the film. The word “startling” doesn’t begin to describe it.

Basically, evidence available to all of us suggests that the self is not monolithic, is not a single entity—and Damasio himself says, “The brain is a system of systems. Each system is composed of an elaborate interconnection of small but macroscopic cortical regions and subcortical nuclei, which are made of neurons, all of which are connected by synapses.”

Elsewhere, more colorfully, he writes, “The ultimate consciousness product,” by which he means the self, “occurs from these numerous brain sites at the same time and not in one site in particular, much as the performance of a symphonic piece does not come from the work of a single musician or even from a whole section of an orchestra.”

More tellingly, he says, “No single mechanism explains consciousness in the brain, no single device, no single region, or feature, or trick, any more than a symphony can be played by one musician or even a few.”

Now, if those words don’t suggest a multi-faceted self, I’ll eat my hat and my college diploma, too.

Monolithic. Multifaceted. What difference does it make?

Well, Freud obviously thought it made a difference, and, after thinking about it, devised the famous concept of the self as consisting of three distinctive parts: the ego, id, and super-ego. And we all know from daily experience that each of us responds to different people in different ways, even on the same subjects, and sometimes within the same hour and setting. We simply present one version of self to lovers, another to parents, and still another to strangers.

Long story short, it seems that a search for the origin of the self ought to begin with a clear idea of what the self is and how it operates. Damasio seems the perfect huntsman for this quarry. You can’t read this book without concluding that he has searched scrupulously high and low for answers, and not just in the laboratory. Let the typical scientist scoff that “philosophy bakes no bread;” Damasio obviously knows that philosophy has leavened a lot of yeasty loaves that got baked in other ovens, and he doesn’t hesitate to prowl philosophical precincts in search of scientific answers. In fact, one of his books is titled Decartes’ Error: Emotion, Reason, and the Human Brain. Still another is titled Looking for Spinoza: Joy, Sorrow, and the Feeling Brain.

So if you get the idea from all this that Damasio’s quest is both thorough and comprehensive, you’re right. Again and again, he anticipates so many questions the reader might have. He even examines briefly one of the questions that was most puzzling: How can a primitive life form “know” what it needs to do to become a complex life form? Does the life force in a simple one-cell organism come equipped with its own built-in micro-engineer complete with intricate instructions as to what to do next, and how, even over eons of time, to do it, how to figure out that vision, for example, would be a nice thing to have—and then figure out how to build an eye to achieve it?

Don’t think so. But, hey, the question mystified both Damasio and Darwin—and remains still to be answered. Damasio hazards the guess that the simplest of organisms arrive imbued with what he calls “values” that are expressed in the simplest of ways: welcome this, avoid that. But where did this idea of “organic value” originate?

So far, nobody has been able to peer into the Great Unknown and give us the answer.