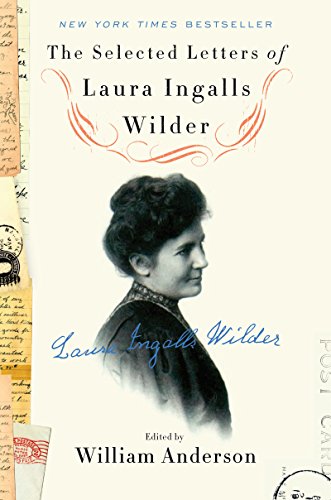 In May 1944, at the age of 77, Laura Ingalls Wilder received a letter from a schoolteacher in Cleveland, Ohio. Every year for decades, she received dozens of letters like it from fans across the country. This time, Wilder wrote back to thank the teacher for reading her books out loud to the students in the classroom.

But Wilder didn’t stop there. She went beyond her polite self and in a rare moment complained about a whole generation. “Children today have so much that they have lost the power to truly enjoy anything,” she exclaimed. “They are poor little rich children.”

That letter, which she signed “Yours sincerely”—as she closed almost all of her letters—is included in The Selected Letters of Laura Ingalls Wilder, a hefty volume edited by Wilder expert William Anderson. Best known for The Little House on the Prairie, which was first published in 1935, Laura Ingalls Wilder grew up in the aftermath of the Civil War in the wide-open spaces of the American West, when they still seemed untamed.

Equipped with a sharp memory, a penchant for historical research, and a keen sense of the literary marketplace, she didn’t begin to write fiction about frontier families like her own until she was in her late sixties. When she did, she didn’t do it alone. Indeed, as her letters show, she had a devoted collaborator: her one and own daughter, Rose Wilder, who lived most of her life thousands of miles away from her parents, but who never cut her emotional ties to the woman who brought her into the world and nurtured her. Mother and daughter were a literary team, though Rose’s name has never appeared on any of the books she helped to write.

The Selected Letters of Laura Ingalls Wilder does not include Rose’s letters, though Anderson makes it clear that the daughter was her mother’s most loyal reader and sharpest critic and that she insisted on revision, revision, and more revision.

Still, the genius behind the Little House on the Prairie—and the six other books in the series, including the first, Little House in the Big Woods—belonged largely to mother and not to daughter. Laura entertained big ideas. Rose attended to the little details. Or so the letters, speeches, and essays by Laura Ingalls Wilder strongly suggest.

In a talk that’s reprinted here that she originally delivered in Detroit in 1937 —when her fourth book, On the Banks of Plum Creek, first appeared in print —she looked back at her life and times with a sense of loss and nostalgia.

“I realized that I had seen and lived it all,” she told an audience of teachers and librarians. With a sense of grandiosity, she added, “I represented a whole period of American History.” Moreover, she explained that she realized, soon after she started to write, that she might chronicle the “history of the whole frontier.” And tell her story with young readers in mind.

No one had ever done that before, though young readers did their best to slog through James Fenimore Cooper’s Leatherstocking Tales. Laura Wilder wrote with the language that young readers could understand and appreciate. No wonder she was deluged with fan mail—so much so that she had to buy an extra large mailbox to accommodate it all. Answering letters occupied a good deal of her time, as she explained again and again.

The Selected Letters of Laura Ingalls Wilder reveal the author not only as mother of Rose and wife of Almanzo Wilder, but as a shrewd publicist and promoter of her own work, and a keen observer of rural life who rarely cast her eyes far from home. The novelist of the homesteaders, she was a homebody herself, though she enjoyed road trips with Almanzo and described them in her letters. When she wrote about politics in Washington, DC, President Roosevelt, and the New Deal she did so disapprovingly. The Wilders didn’t like big government.

In his introduction to this volume, editor William Anderson explains that Rose destroyed many of her mother’s letters. “The gap from 1940 to 1956 is regrettable,” he writes. Indeed, without them, a crucial part of the mother/daughter knot remains unknown and a mystery.

Still, this collection includes 400 letters, beginning in July 1894 and ending 58 years later in July 1952. Most of them were posted from Wilder’s Rocky Ridge Farm in Mansfield, Missouri, not far from the geographical heart of the nation that she made into a cultural landmark.

Loyal fans will find much to enjoy in The Selected Letters of Laura Ingalls Wilder. Students and scholars will discover rich material about the origins and development of Wilder’s work. “The first of my books, Little House in the Big Woods, was written to preserve the stories that Pa used to tell sister Mary and me when I was a child,” she wrote to a correspondent she called “Miss Crawford.” (She rarely addressed anyone by his or her first name.)

Formal, reserved, and occasionally severe in her moral judgments, she could also let down her guard as when she wrote to Mrs. George Jones in June 1944 to say, “I never smoked nor drank nor do I wear skirts so short as the fashion is.” She went on to say, “Do not paint my fingernails nor use rouge.”

The Selected Letters of Laura Ingalls Wilder offers a self-portrait of an unpretentious, pioneering American writer who garnered no major literary awards but who won the hearts of millions of readers not only on the prairies but in big cities and small towns on both sides of the Mississippi. This volume also provides a portrait of Rose Lane, who wrote the first biography of Jack London in 1918, and who went to Vietnam in 1965 at the age of 78 to report on the war for Woman’s Day.

The Selected Letters provides a remarkable tribute to an intimate, yet long distance relationship between mother and daughter that led to the production of a series of books that have become a part of our national culture and identity. Readers today might not recognize the name Laura Ingalls Wilder as easily or as quickly as they did say, 85 or even 50 years ago, but chances are the title, Little House on the Prairie, still rings a bell and stirs up fond childhood memories.