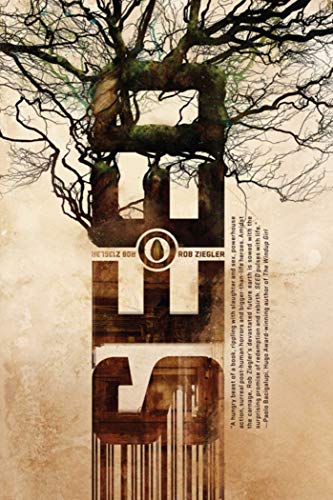 “Richly developed characters, a stark believable world, and agendas that are never 100 percent transparent make Seed an engaging read. Not light. Not heavy. But surely thoughtful and entertaining speculative fiction.”

What if food were scarce—and what was available might kill you?

In a future world, where climactic change has made traditional food sources obsolete, there is a biogenetically created living city that provides all the seed that will grow in this new environment. But the people who created this city have their own agenda, one that does not have the common good in mind.

In his debut novel, Seed, Rob Ziegler paints a world where living conditions are harsh, people live for themselves, and altruism is hard to come by. Into this world he sends an autistic boy and his brother, a soldier who still has nightmares from her imprisonment in Siberia, and an assorted supporting cast of folks who are not always what they seem.

In the hands of an inexperienced or untalented writer, having a cast as large and geographically diverse as those in Seed might leave the reader always wondering who is the focus from one chapter to the next. But Mr. Zeigler does an excellent job of creating rich and culturally and psychologically diverse characters about whom you want to continue reading, for each has a distinct and unique voice.

There is Brood and his autistic brother Pollo. They are scavengers, using trade to get the food they need and traveling with a less-than-ideal role model who nevertheless keeps food in their stomachs and often a roof over their heads. Little does anyone know—reader included—the important role that Pollo will play in the future of the human race.

There is Sergeant Sienna Doss, a tough soldier who always completes her missions but is haunted by images of snow falling on corpses from her captivity in Siberia. Thankfully, she is the type of soldier who knows when not to follow orders.

There are Pihadassa and Sumedha, biogenetically engineered siblings and mates who separately unravel the plot that could destroy humanity but develop entirely different ways to solve that dilemma.

And all roads eventually lead to Satori, a living city made of flesh and blood grown over the ruins of Denver, Colorado. Satori produces the seed that feeds what is left of the people of the United States. But Satori is not conscious or self-aware; it is a mindless beast that does the will of the Fathers—the four men who created it. It nurtures them in pods while they wait for their creations, Pihadassa and Sumedha, to design a genetic graft that will make them uniquely adapted to the new world.

The research conducted to develop that graft leads to the creation of the Tet, a disease dispersed through the seed that slowly kills you by destroying your joints and connective tissues.

Reading Seed pulls you into a wasteland of a world where simple things keep you alive and family is defined by behavior, not necessarily blood. It is a world in which kids must act like adults, religion is used to terrorize and subdue, and good and evil are not as clearly distinguishable as one would expect.

In Seed, Robert Zeigler deftly takes you through this world, switching from one character to the next with grace and ease as they all converge on Satori. And the ending you come to expect constantly eludes you.

Richly developed characters, a stark believable world, and agendas that are never 100 percent transparent make Seed an engaging read. Not light. Not heavy. But surely thoughtful and entertaining speculative fiction.