See You at Harry’s 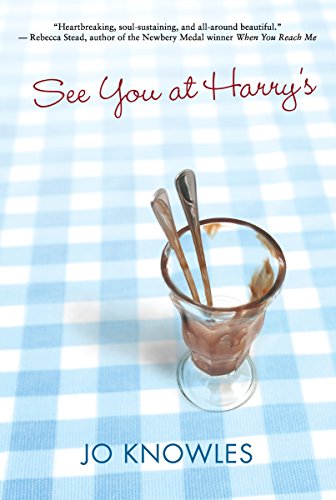 “The story, as told in Fern’s voice grabs, at the heart with its unfathomable anguish. Uniting many separate plots, the author creates flawless flow, in-depth characterization, and dialogue that all give superb insight into an average, loving family having a difficult time. Powerful and gut wrenching, See You at Harry’s by Jo Knowles is heartrending.”

Twelve-year-old Fern, the second youngest in an average, middle-class family, often thinks no one notices her.

Her older siblings are involved in their own issues: Sara, 18, is taking off a year before starting college, and Holden, 14, is trying to prevent his folks from learning he’s gay. Three-year-old precocious Charlie unconditionally loves Fern, though at times she thinks he’s disgusting and a pain. Somewhat eccentric and aging hippies who follow the Grateful Dead, Fern’s folks named their children after favorite book characters.

Fern’s mom and dad own Harry’s, a family restaurant/ice cream parlor, which they inherited when his parents died. Totally involved in the business, Dad is always looking for new ways to promote and attract more customers.

One summer day, he summons the family to the eatery with a surprise. The kids, with the exception of Charlie groan, wondering what hare-brained idea he has now concocted. Their dad presents them with different colored neon tee shirts branded with a dinosaur chomping on an ice cream cone, sporting the eating place’s name then tells them they are making a commercial. Sara, Holden, and Fern do not want to participate, but their father insists, and of course, Charlie is thrilled.

The ad spotlights the family, and Charlie becomes the star with his ebullient spirit and winsome lisp. Though the older sibs are mortified and dread the brunt of jeering once their friends see this, Charlie delights in the project, adding his own special charm.

Before long, it’s September, and just as Fern thought, teasing begins on the bus—but the mocking is directed at Holden. Because Holden is “different,” others make a point of ostracizing him. He ignores the taunts, though he insists he will not ride with them again. The next day, he skips school, and when Fern is taunted by two bullies about her brother, she gets angry enough to punch one of them in the jaw. After this incident, she agrees with Holden—they will find different mode of transportation.

Dad’s commercial is a big hit and business booms. Fern is distressed for she is laughed at with Charlie’s comment, “See you at Hawees,” pronounced with his lisp. Fern finds consolation in her best friends, Random and Cassie. She is awed by Random’s blasé attitude as nothing seems to bother him, and he tries to get her to shrug off the hurtful comments.

One day when Fern is overwhelmed with caring for her younger brother, a catastrophe almost strikes. Fern receives chastising from her mom. She gets angry and lashes out at her—something she never does and later deeply regrets, for the next day tragedy does hit the family and just about tears them all apart.

The story, as told in Fern’s voice grabs, at the heart with its unfathomable anguish. Uniting many separate plots, the author creates flawless flow, in-depth characterization, and dialogue that all give superb insight into an average, loving family having a difficult time. Powerful and gut wrenching, See You at Harry’s by Jo Knowles is heartrending.