Seduced by a Pirate 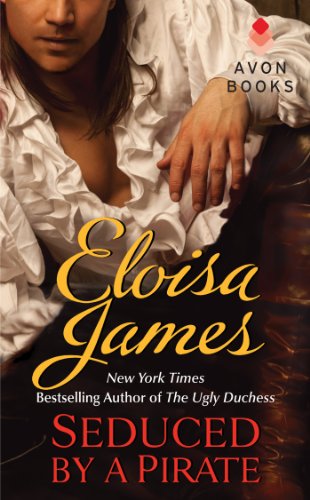 “‘Potential’ is the operative word here.”

Seduced by a Pirate is the latest in Eloisa James’ series of historical romance novels loosely based on classic fairy tales. This novella follows The Ugly Duchess, revealing the backstory of a popular secondary character from that book.

Sir Griffin Barry is returning home from more than a decade at sea hoping for reconciliation with the wife he abandoned on their wedding night. His neglected wife, Phoebe, is not so sure that she wants him in her life, much less in the lives of her three children, adopted while her husband was away. Combine that with a rash bet as to whether Griffin or his cousin, James (hero of The Ugly Duchess), would be the first to bed their respective wives, and there is great potential for romantic fun.

“Potential” is the operative word here. Unfortunately, that potential is unfulfilled.

Ms. James has done her homework on the period, as is to be expected from a professor of English; what she hasn’t done is much work in creating distinct characters or believable human reactions. Characters are introduced and dropped quickly with barely a sketch of information that would make them memorable.

As this is a novella, and a romantic one at that, it is to be expected that the romantic leads would take precedence over the other characters for “screen time,” but that just makes the introduction of myriad characters even more incomprehensible.

For example, it would certainly be socially correct for Lady Barry to have a nursemaid/governess for her children, but we are introduced to two women. One character is definitely stronger (and reminiscent of Nanny McPhee), so the introduction and subsequent mention of another character that stands there doing nothing does nothing to drive the story forward. There are several other characters that fit this mold as well.

Ms. James’ tale might have been better served by dropping some of the ephemera and giving more time to creating fully fleshed and compelling primary characters involved in a believable relationship.

Instead, she presents a sketch of characters that could have come from Shakespeare’s stock stable: the beautiful, but prim, woman and the handsome, swashbuckling hero who sweeps her off her feet. In the space of a few lines, Phoebe, whom is presented as a levelheaded woman, goes from declaring she wants her spouse to divorce her to fantasizing about his great tuchus and letting her maid dress her in “a dress that might well belong to a harlot in a high class brothel.”

Griffin, presented as a hardened and tough pirate, spends great swaths of time erect and ready for a woman he barely knows. By the end of the day, he’s already declaring his love for her and ready to forgive her for her presumed infidelity in the one area of conflict in the novella: He doesn’t initially know that the children are adopted.

The problems with this novel aren’t all wrapped up in weak characterization and extraneous characters, either. There are structural issues as well. Besides lacking conflict, there is a real problem with the story arc. The first chapter sets up the challenge: bed the wives. That arc ends in chapter 15. But then the story continues in chapter 16, which opens awkwardly:

“The story thus far has taken but a single day . . . but this final chapter happens later, after days had blurred together like shining beads on a string: luminous, joyful, slipping from pleasure to pleasure, into a memory of the best summer of their lives.

Talk about breaching the fabled fourth wall. Ms. James proceeds to give us a vignette about Phoebe’s unexpected pregnancy (at the ancient age of 34). The inexplicable epilogue goes further into the future, showing Griffin as a judge and new father . . . and then just sort of peters out. It is a strange and unfortunate ending to the story.

Seduced by a Pirate gets the historical details right while getting the human story wrong. It presents weak characters and a limp story meandering to an unsatisfying end.