The Secrets They Left Behind: A Mystery 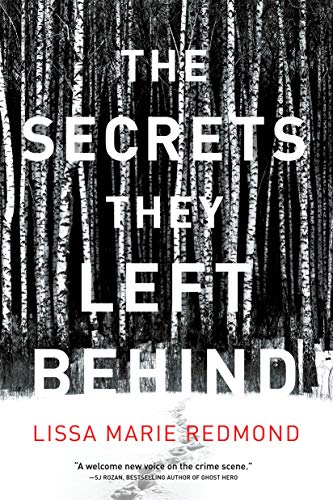 Shea O'Connor, a 23-year-old Buffalo cop, is given an assignment with the FBI to pose as a student in the small town of Kelly's Falls, New York. Three young women have gone missing, and what better way to find out information than to go undercover and attend the small community college with the friends of those who are missing?

FBI Agent Bill Walters summons Shea to his office. She worked with him on a previous case; one still tormenting her with nightmares. He fills her in on what he's now working on:

"'He leaned back in his chair, the same wistful smile on his face. 'You know me, Shea. I'm not one to beat around the bush, so I'm going to get right to the point here. I've got an interesting case on my hands, and I thought maybe you could help with it.'

"'I didn't know you had an active case in the city again.' A chill ran up my spine. They had lots of cases in the city, but Bill was interested only in the worst ones.

"'I don't. This is something special. I've never seen anything quite like it. Not in twenty-five years on the job. I must admit, I'm stumped, and you know how I hate to be stumped.'

"'I don't understand. If it's not in the city, how can I help you? It's not my jurisdiction. The Bureau can't just step in and take over a local investigation.'

"'You know the Buffalo branch covers counties all the way to the Pennsylvania border.'

"I could feel my forehead creasing in concern the more he talked. 'What does this have to do with me?'

"'It's a town called Kelly's Falls.' He went on as if I hadn't even spoken. 'It's right on the state border with Pennsylvania. Three young girls, all college freshman, just disappeared. No clues. No traces. They went to one girl's house after a party and vanished. Their purses were left, their jackets, their cell phones. The TV was on. There was no sign of a struggle; they were just gone.'"

Shea is ambivalent about working another job with Bill after their past assignment, which almost cost Shea her life. He gives her papers to peruse about the situation stating, "'I want you to go in practically blind. No preconceived notions. I want to see what you can come up with on your own. Most of this [information] you could get on the Internet.'"

"'No backup. No surveillance. You're throwing me in without a net. Again.'

"'I wouldn't ask you to do this if I didn't think you'd be safe. But there's always an inherent risk when you're trying to track a killer.'

"'I thought you said they were missing.'

"'No bodies. It's been ruled a kidnapping due to the insistence of the parents and the circumstances of the disappearance. Is it a kidnapping? Human trafficking? A triple homicide? Who knows at this point? The county attorney approached the FBI for assistance because the local authorities and state police have come up with absolutely zero. I don't think these girls up and ran away. Once you read the file, I'm convinced you'll agree with me.'"

Shea intrigued yet dubious, takes the assignment in which she acts as a transfer student. It is now March 18th, and her reason for transferring mid-season is because of her "uncle" Roy, the local police chief, who suggested she relocate after her parents’ alleged fatal automobile accident. Using the last name of Anderson, she rents a room in a boarding house near Roy's home. Though she's five years older, she easily passes as an 18-year-old coed and blends in with the others. Only Roy and Bill are aware of her true identity.

Quickly Shea is befriended by Kayla, Maddie, and Jenna, also students and friends to Skyler, Olivia, and Emma, the three missing girls who were last seen together on December 28th. As Shea becomes close to the friends, she realizes she must play the part of an innocent newcomer who is unaware of the disappearance of the others. She keeps in constant contact with Bill as well as Roy, though she and the chief do not hit it off. He doubts she can offer any help and is concerned she is getting too engaged with the young students.

Her newfound friends are excited to be close to a "big-city gal" and want to learn about her life in Buffalo as she innocently tries to wean information out of them about the others. Where are they? Did they run away? But without a trace and taking nothing with them? Who is responsible? Could it be Joe Styles, the campus "bad boy" or someone he associates with? Is his intensely jealous girlfriend, Amber involved? Joe is known as a player, and Amber shows her hatred of Shea whenever he talks to her. Had he come on to one of the three and incurred Amber's wrath?

When Shea meets Nick, brother to Olivia, one of the missing girls, she is instantly attracted to him even though he is younger. What difference does it make when he thinks she's 18 and that she won't be in town long? They become close before long and as small towns are, there is gossip. Roy is incensed, believing she is not fulfilling her duties and making him look bad as her alleged uncle. But Nick is grief-stricken about his sister and finds comfort in Shea, considering they both are sharing losses.

During her time investigating, Shea is lonely and misses her roommate and her home in the city as well as feeling stymied by her current assignment. Is this case too cold? She somehow senses Kayla is withholding something about the night the girls vanished than she's letting on, and there must be some way she can talk to Kayla without arousing suspicion. Too many suspects come to mind, but when the actual perpetrator is discovered, everyone is surprised.

This tense, fast-paced thriller has the reader believing they can pinpoint the offender before the novel is half-read, however, the surprising culprit is unexpected as well as the ending which is sure to incite a chuckle. This author recognizes exactly how to capture her audience and keep them riveted with the many twists and turns and subplots included in the narrative. The characters are well-defined, especially dealing with present-day teenagers, and the crime theories and scenarios are spot on.