Secrets from the Eating Lab: The Science of Weight Loss, the Myth of Willpower, and Why You Should Never Diet Again 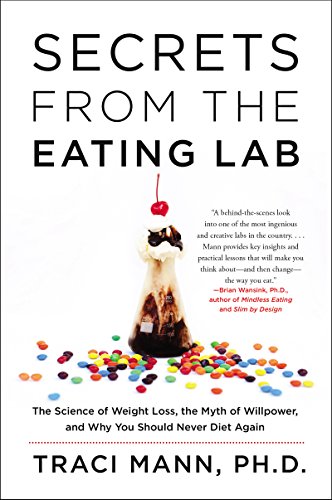 “Read Secrets from the Eating Lab and break free!”

Traci Mann, Ph.D., is a professor of social health and psychology at the University of Minnesota where she founded the Health and Eating Lab in 2007. Secrets from the Eating Lab is a fascinating and revelatory work in which Dr. Mann challenges popular assumptions about obesity, dieting, and willpower. Her discoveries, and her colleagues’ and students’ lab work and research create a powerful and imperative volume that everyone and anyone concerned with diet or health should read.

Dr. Mann does not manipulate the facts to fit the truth. She performs her studies without backing from major diet companies or industries that have a vested interest in seeing her and her lab discredited. Dr. Mann and her researchers have received funding and support from The National Institutes of Health, the United States Department of Agriculture, and NASA, who have little profit to make with bad science and stand behind the Eating Lab despite the unpopularity of its findings among some of the top and powerful industries and lobbyists.

In the first section of Secrets, Dr. Mann takes her time in dispelling the cloud of vested interests and reveals how findings can, and are, manipulated or conveniently unexplained by large companies such as Jenny Craig and Weight Watchers.

Using gold standard research, Dr. Mann exposes the many companies’ desire to keep dieters in the dark from their secrets: they only provide the facts of short term dieting and change that are usually successful in the first four to six months, refusing to reveal the truth that in the long term, dieters often fail, regaining what was lost and often more.

Dr. Mann explains how dieting is an unsuccessful hamster wheel on which the public places themselves in an often vain attempt to change what biology and genetics have given us—our bodies, our predetermined weight range, muscle mass, etc.

Dr. Mann writes in an engaging and entertaining style (and provides a Notes section with all her documented resources) while relaying the facts: diets are bad for you. Not only do they affect your stress levels, increasing cortisol output, which in turn causes increased fat gain and storage, but psychologically diets make a person miserable. Obsession about food or scale numbers is unhealthy. Dr. Mann encourages readers to recognize what is driving the weight-loss desire—often the misinformation that obesity kills or the images in magazines and movies—and to refocus our goals and learn to be okay with what the genetics lottery handed us.

In Secrets, readers get firsthand information about studies done in the Eating Lab and the research performed. Readers are given unique and interesting insights into how people react around food without being aware of it. As Dr. Mann urges people to change their thoughts about dieting through scientific fact, she also provides tools to help readers alter their thought patterns and eating habits, recognizing that being healthy is important.

What she shows readers is that obesity won’t be what kills a person. A person is more likely to have a shorter lifespan if they have negative initials that spell things like P.O.O. Dr. Mann urges people to exercise because it is good for hearts, cholesterol, and psychology rather than because of weight loss, which may not always occur despite best efforts. Readers will learn about weight cycling and its dangers, as well as how to achieve the lowest livable weight—which is what is right for an individual and his or her genetics, even if it means never fitting into a size two or achieving muscles like Schwarzenegger.

Of the many helpful tips provided, some are ones that readers will have heard before from other reliable and not-so-reliable sources, but Dr. Mann explains why and how these tricks work. In conjunction with the idea that willpower does not effectively work because our psychology, unknowingly quite often, will work against us.

Readers are shown humans are lazy, but with good reason and readers can use this knowledge to their advantage. The smallest inconvenience or hurdle can affect what and how a person does things. By pushing the bread basket away or asking it not to be brought to the table allows individuals to stop overeating bread more easily than saying you won’t do it when you go out to eat. Other ideas of how to improve chances of going to the gym or eating healthier include i-statements, which are if I am going out to eat then I will get a salad—a person who thinks of an i-statement is more likely to succeed in their plan, particularly when it does not include a “not” statement, than people who do not think this ahead of time.

Secrets from the Eating Lab is an absolute must-read for anyone who has ever been on a diet or for any person worried about their weight or appearance. Dr. Mann encourages individuals to appreciate what their body can do, at whatever level they do it at, and to get out and live rather than spend time obsessed with food. She acknowledges there is a social structure created that encourages this obsession, but it is feeding an industry interested in our wallets rather than our health and wellbeing.

Read Secrets from the Eating Lab and break free!