This Secret Thing: A Novel 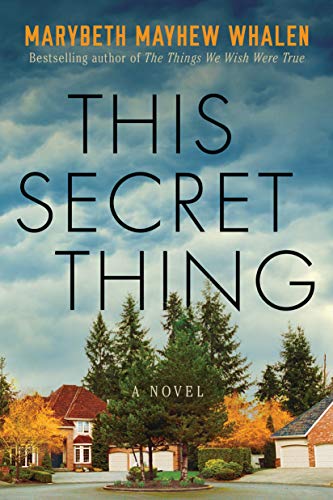 It is the end of August and Norah Ramsey, a single mom is raising her 15-year-old daughter, Violet in Raleigh, North Carolina. Norah, who is estranged from her mother Polly, hopes to make a better life for Violet than she had. Polly was married several times and readjusted her life and that of Norah's to her current spouse just to hang on to him, believing she needed a man. But Norah, divorced from Violet's father, is now the owner of a lucrative marketing business with a silent partner that affords her and Violet to live in a nice home and have a respectable life. But is it?

Violet is shocked when she is pulled from her class to learn Norah is arrested and charged with running a prostitution ring. Worried about her situation, Bess Strickland offers Violet to stay with her family rather than being alone. Violet used to be Violet's best friends with Bess's daughter, Nicole, but now Nicole no longer wants to be around her. Nicole is confrontational toward Violet, and things are made worse by the sudden return of Nicole's older sister, Casey, who arrived home from college with no explanation.

Next, Violet goes to her father's house where her stepmother indicates she's not wanted there either, so Violet's dad contacts Polly to come for Violet. Polly understands the need to help Violet and has been looking for an excuse to get away from her latest husband Calvin. Though charismatic in front of others, Calvin only cares about Polly's money, of which he's been bleeding her dry. Polly never told Calvin she had a daughter, let alone a granddaughter, so she decides this is her best chance for her to escape. She withdraws all her savings and grabs her dog Barney to head to Norah's, hoping they will be able to reconnect and wanting to be a proper grandmother to Violet.

Violet, equally unprepared for a grandmother she had never been aware of, is aloof toward Polly, but as time passes, she enjoys her company and wishes she could remain there permanently.

Micah Berg, two years older than Violet, lives across the street, and she has had a crush on him for a long time. With her mom in jail, they share a bond because he is also being shunned by his peers. Once a popular jock, he is the brunt of gossip and condemnation after his girlfriend died under mysterious circumstances earlier that spring. So when Barney escapes and heads over to Micah's house, Violet chases after him. While the pooch plays with Micah's dog, Violet has an excuse to talk to Micah, seeing they both are considered outcasts.

Meanwhile, police Detective Nico Rinaldi is handling Norah's case, and for some reason he strongly believes she knows the whereabouts of his missing brother Matteo. Matteo disappeared right after Norah's arrest, and Nico is obsessed with finding him, thinking the two may be connected, yet his obsession causes the breakup of his family.

The main premise of the investigation is to find Norah's "client list," which allegedly lists some important Raleigh individuals who could be seriously hurt if their names were made public. But Bess appears on the "Nosy Neighbor" podcast to talk about her association with Norah. Everyone is anxious to learn if she is aware of Norah's clients because they had once been close, but Bess does not have this information.

Bess is also withholding secrets of her own. Though she's unhappy with her marriage, she remains with her husband while she worries about Casey's sudden return and Nicole's hostility toward Violet. Through her pain, she tries to be an upstanding neighbor by helping others. When she discovers a homeless man sneaking into her garden shed, she befriends him. She feeds him, gives him some of her husband's old clothing, and pledges to help him get back on his feet without disclosing his presence to anyone. Avoiding her other friends is another factor for she fears they only want information about Norah. At this point, she misses Norah and having someone to confide in:

"This was the thing people did not tell you when you got married and had kids: how important your female friends would become. You thought your friendships in grade school or college were important, but they paled in comparison to the friendships you would form with other mothers. No one told you how you would need them to talk to, to process with, to understand what your husband and kids could not. No one understood the release that would come from laughing till you cried with another person who knew you, understood you, accepted you. No one would tell you how hard that person would be to find.

"For a long time, Norah had been that person. And then she wasn't."

A thorough search of Norah's home does not disclose her client list and because she won't offer it up, she remains incarcerated. Violet feels she is being selfish and has an idea where the information the cops want could be, and her pursuit with Micah is not fruitful. Violet cannot understand why Norah is being so stubborn and confronts her in jail after getting permission to visit.

The central character's points of view are contained in different chapters, which gets the reader deeply involved in the storyline and seeking answers. Emotional challenges are addressed along with resolutions, making this a very relatable read. The ties of family and friendship are tested, proving we all need others for support, understanding, and reassurance.

This Secret Thing is intricate and contains several subplots with multidimensional characters. It is incredible that a small neighborhood could hold so much secrecy and mystery, but one never knows what goes on behind closed doors. Reading like a modern-day Peyton Place, this page-turner offers juicy gossip and mounting suspense, keeping one captivated up to the welcome and satisfying conclusion.