The Secret Teachers of the Western World 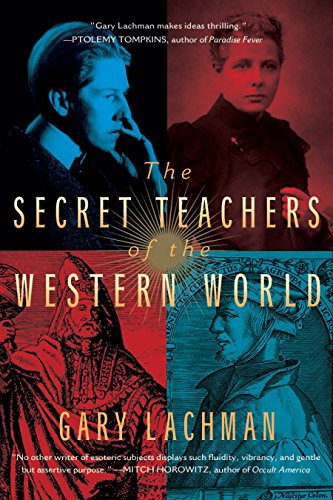 “For the curious, The Secret Teachers of the Western World exists as a valuable and highly readable resource.”

At the intellectual heart of The Secret Teachers of the Western World by Gary Lachman is the divide between right-brain and left-brain thinking. An abbreviated description of this conflict could be characterized as “The left, the story goes, deals with language, logic, and sequential thought and has an acute sense of time, while the right is attuned to patterns, intuition, sees wholes simultaneously, and seems to reside in a kind of eternal present—at any rate it has a poor sense of time.”

This battle frames a search for secret knowledge hidden in occult and esoteric sources. Throughout history and across cultures seekers of hidden knowledge have been persecuted by the forces of mainstream religion and mainstream science. This narrative of the history of these ideas could be stultifying or confusing for non-specialists and the curious. Luckily Mr. Lachman creates a history of ideas that fascinates and excites. (Under the name Gary Valentine, Lachman played bass with the New Wave band Blondie.)

The history of occult and esoteric knowledge necessitates clarification. The term “occult” carries numerous negative connotations, from satanic Dungeons & Dragons players to heavy metal bands persuading their fans to commit suicide. (Both notions are incredibly dumb.) Occult means “hidden,” while esoteric means “obscure.” Due to the constant fear of persecution and the gravity of the knowledge involved, many seekers and practitioners wanted to keep the knowledge hidden. Whether as Gnostics, Freemasons, Illuminati, or Theosophists, those who are immersed in the secret knowledge are involved via a hierarchy of access. Only those deemed worthy can attain this philosophical enlightenment.

Lachman's book ranges far and wide, from Neanderthals to the New Age, Pythagoras to Timothy Leary. The book possessed an encyclopedic array of ideas, personalities, movements, books, and philosophies. Due to its wide scope, the book lacks in-depth investigations, but every section has references, recommendations, and interconnections to related materials.

What holds this disparate narrative together is the right-brain/left-brain conflict. Lachman borrows this idea from The Master and His Emissary by psychiatrist Iain McGilchrist. The psychological framework exposes how mankind has been limiting its own potential by left-brain dominance, more explicitly with the sciences. Science is reductive in seeing the universe as a mechanistic and deterministic. This is opposed to the secret knowledge that the universe is a living consciousness an individual can engage with through “active imagining.”

To an apathetic bystander, these descriptions come across as too pat: the enlightened forces of science against hippie dippy New Age mumbo jumbo. Lachman reveals there exists more than the reductionist take of this binary opposition. He reiterates the value of “and/both” thinking instead of “either/or” thinking. The notion of science vs. religion does a disservice to both, besides actual historical events expose the opposition as science and religion vs. secret knowledge.

Lachman clarifies various terms including hermetic, gnostic, and esoteric. Different philosophies come with short pithy biographies of figures ranging from Plato to Aleister Crowley, Helena Petrovna Blavasky, and George Gurdjieff. Throughout, he cautions to take the information with grains of salt, since personal histories can become modes of personal self-hagiography.

Certain examples beggar credulity, as with the paranormal investigator Stan Gooch's assertion that the Neanderthal possessed secret wisdom. Science possesses the tools to understand the dimensions of the Neanderthal brain, but it is much harder to know for sure what they thought.

Recent discoveries in quantum physics and notions like the multiverse and the Heisenberg Uncertainty Principle become illustrative of the porous border between scientific theory and esoteric knowledge. Is light a particle or a wave? Yes. With that in mind, even if notions like occult and esoteric thought create adamant disagreement, the occult and esoteric can still be used as an interpretative framework to examine the world and the mind. For the curious, The Secret Teachers of the Western World exists as a valuable and highly readable resource.