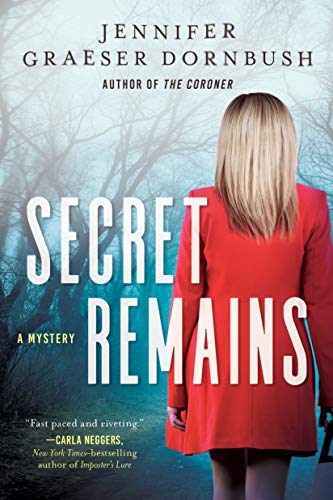 “a very interesting novel in which the concept of the discovery of a missing child’s remains giving closure to the family is a cogent one in today’s society.”

With her father’s heart attack and subsequent death, Dr. Emily Hartford has returned indefinitely to Freeport, Michigan. The unearthing of human bones at a new housing development may extend her stay longer than she expects for she’s asked to take her father’s place as coroner.

“The contractor fixed his gaze on something unearthed from the broken ground. He knelt and brushed away the cool, moist soil, his eyes growing wide as he unearthed a slender gray bone.”

“I used to take her home now and then but a lot of times her boyfriend would drive her. This one day she came up to me after lunch and asked if I could take her home after school. I drove her home that day and-and never saw her again,” said Nick.”

With Emily’s help, Nick, now Freeport’s sheriff, begins his investigation, recalling the rumors circulation at the time of Sandi’s disappearance that she’d participated in a sex video; her testimony putting her stepfather away for child abuse; and the fact that there were a group of boys at the school call “the pack” who aided and abetted the further scandals surrounding the girl.

After further evidence is found near the body, Nick gathers DNA samples from those known to associate with Sandi.

“Do you honestly think I have anything to do with this?”

“To rule you out as a suspect.”

“The problem here isn’t my DNA. It’s that you don’t trust me.”

When he neglects to send in his own sample, Emily goes behind his back, and get one, sending it in.

To her shock, Nick becomes the prime suspect, along with James VanDerMuellen, Sandi’s then-boyfriend. Unfortunately, James is nowhere to be found.

“His dad claims he hasn’t seen or spoken to James in over six months.”

In the middle of the investigation, Emily has other things distracting her. She discovers her father had another child, and she now has a half-sister who wants to know her. Her ex-fiancé is also determined to get back into the picture, and the paleontologist called in to view the bones is trying to lure her to his staff.

When Nick is arrested and a new investigating officer is brought in, Emily is left to finish the case on her own. Interviewing Sandi’s mother and little sister, both of whom are still suffering from the trauma of the girl’s death, she finds there are quite a few other affected by the discovery of Sandi’s body.

Her best friend’s husband was one of the pack, and his marriage is now threatened when his wife discovers this. In an attempt to clear Nick, find James, and uncover the real killer, Emily will wade into the world of dives and strippers, and delve into the psychological trauma of a family having lost a child to violence. In the end, she will discover the saying “‘Revenge is a dish best served cold” is a true one, and a decade makes for a very icy morsel.

Although this is a very interesting novel in which the concept of the discovery of a missing child’s remains giving closure to the family is a cogent one in today’s society, the main character’s standing may drop a couple of pegs in the reader’s estimation. Emily seems to have a tendency to react too quickly. The moment she learns that Nick knew Sandi, she advises him to get a lawyer. Since there’s no reason at that point for Nick to be involved, this seems to be jumping the gun a bit, though, as it turns out, Nick will definitely need legal representation, but later rather than sooner.

This looking too far ahead to what may or may not happen, and becoming caught up in extrapolations happens several times in the story.

There are several subplots to distract the reader, also, involving life-changing choices Emily must make, proving that a coroner has a life other than doing autopsies, and plenty of decisions to make about that life.

Though the discovery of James VanDerMuellen’s whereabouts is explained and dismissed in a few sentences, this revelation is a twist no one will expect, and becomes the perfect ending to a case that becomes more complicated as each fact is revealed.

Secret Remains is the second entry in the Coroner’s Daughter series.