The Secret Race: Inside the Hidden World of the Tour de France 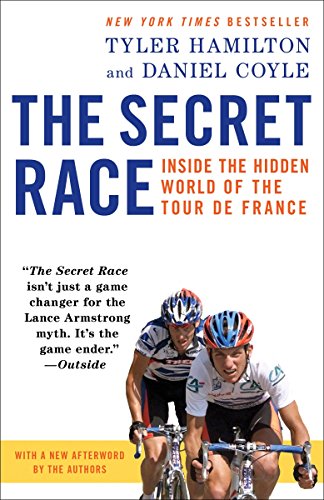 A lot has happened since Tyler Hamilton and Daniel Coyle published The Secret Race: Inside the Hidden World of the Tour de France.

Rather than revisit the review posted on NYJB eight months ago, the focus here is on what has changed in the context in which the book was published and the new Afterword included in this edition.

The central thesis of The Secret Race is that there is a secret race parallel to the bike race: the behind the scenes race to optimize the use of performance enhancing drugs while minimizing the prospect of being detected.

Just as riding a bicycle at high speed requires a fine sense of balance, so, too, does managing the performance enhancement process. In certain ways, the latter race is the athletic equivalent of a ponzi scheme: great as long as it lasts, but ultimately unsustainable.

While some might perceive that this book, recognized in the United Kingdom as the William Hill Sports Book of the Year Award, precipitated Lance Armstrong’s downfall, the truth is that Tyler Hamilton’s confession and the forces that brought down Lance Armstrong were concurrent in time, but by no means was the former the cause of the latter.

The author is hardly early in the whistle blowing process, for others, most notably Floyd Landis, were far earlier and more visible in their efforts to “out” Lance Armstrong’s drug use. As his sponsors included a very powerful, sophisticated drug company, is it more than a coincidence that Lance Armstrong evaded detection for drug use when virtually every one of his competitors were caught?

The improbable justification for this dubious and highly questionable conduct was that such a proceeding would be “distracting” during the presidential election and also adverse to the cancer community, which had so much invested in Lance Armstrong’s LiveStrong Foundation.

Subjected to a relentless separate initiative by USADA—United States Anti-Doping Agency—Armstrong decided to opt out of the USADA arbitration hearing, which he labeled “a charade” and described as “nonsense.”

Undeterred, USADA nonetheless sanctioned him. One of the extraordinary facets of a quite bizarre situation is that contrary to what happened with every other cyclist, Lance Armstrong’s penalty looked back further—he was stripped of all seven of Tour de France victories and essentially every race he rode post cancer recovery—and looked ahead further, subjecting him to a lifetime ban from the sport.

In the Afterword, Tyler Hamilton relates the media hurricane “given the close concurrence in time to the USADA aggressive action against Lance Armstrong and the publication of his book,” stating, “In a heartbeat my life turned into a crazy tumble of cameras, microphones, and interviewers, everybody urgently wanting to know about me, about what I had to say, but why I had come forward now.”

Mr. Hamilton writes that his nemesis’s decision to engage in a supposedly tell-all interview with Oprah Winfrey was vintage Lance Armstrong responds to the frustrating legal process, for “It was only a matter of time before Lance did something big. He can’t help it; it’s the way he’s wired. He gets pissed, and he needs to respond. He needs to shut people up and take control of the situation. He has to prove to the world that he is still Lance Armstrong.”

Regarding the interview itself, Tyler Hamilton writes, “Oprah did a good job. She had clearly done her homework, and she reacted to many of Lance’s answers with a mix of exasperation and disbelief. Watching their tense exchanges felt like watching the most unsuccessful therapy session in history, a mix of truth, evasions, calculations and outright lies, all threaded through with an almost scary lack of empathy.”

Not everyone viewed Oprah’s interview of Armstrong the same way Mr. Hamilton describes it. Some thought that Oprah sounded as if she was reading from a script crafted by Lance and his lawyers.

On more than a few occasions, critical follow-up questions were not asked. If an effective, high stakes media interview is to employ some techniques of the probing cross-examination of a legal proceeding, Oprah’s interview with Lance did anything but. Mr. Hamilton’s lack of perspective concerning the Oprah interview compromises the credibility of everything else that he writes.

Tyler Hamilton’s book is a long form exercise of the logic puzzle in which an individual proclaims he is telling the truth then states he is a member of a certain group—all of whose members lie.

Responding to a question by Matt Lauer on the Today show concerning vehement denials by Lance Armstrong and the professional cycling federation, Mr. Hamilton commented, “It doesn’t surprise me that they deny it; I denied it for years. After a while you would get pretty good at it. I’ve lied to you before, straight to your face.”

Since The Secret Race was published, Lance Armstrong’s drug use has assumed a much, much higher profile, which has been great for book sales. But what has transpired since this book’s original publication and the author’s telling comments in the Afterword diminishes rather than enhances Mr. Hamilton’s contentions.