The Secret of Ka 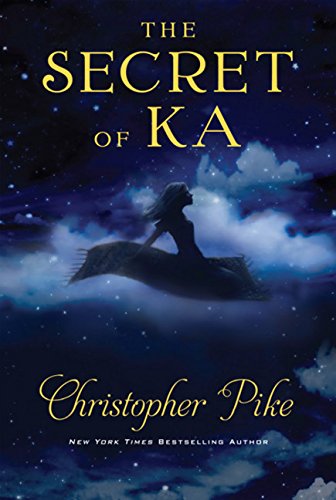 When one hears the name Christopher Pike, high-school horror immediately comes to mind but not necessarily tales involving flying carpets and the lore of the Middle East.

In Pike’s newest work, The Secret of Ka, we see an imaginative story with almost fairy tale-like qualities that takes us to the land of the Djinn and incorporates elements of ancient fables. Building on the tales of magic carpets and genies, Pike has created a modern day fairy tale unlike any other currently available. However much like his previous books, this story also soon becomes a magical nightmare in more ways than one.

Sara is an American teenager exploring modern day Turkey as her father works on an important project in Istanbul. Angry that her father has somewhat neglected her since they arrived, she convinces a young Turkish boy to take her to her father’s work site. Amesh, the teenage boy employed by her father’s company just happens to be fluent in English despite his low standing as a poor delivery boy. Amesh is alluring, with dark looks and a secretive manner, but he also holds a hint of danger for the young American foreigner. The teen is also missing one thing almost all boys have: a right hand. Once the two meet they embark upon a somewhat remarkable journey leading them to the discovery of the famous “Carpet of Ka” and the island of Djinn. Their journey takes them long distances through time and space and ultimately has a hand in the fate of mankind itself—while also being a love story.

To say the plot of The Secret of Ka is somewhat fantastical is being generous. Although some elements of the story are alluring, most simply will leave readers shaking their heads in disbelief and, sometimes, confusion. The work has the special quality of being too young and too old at the same time. Its subject matter would most definitely appeal to a younger, middle-grade audience, but the book is written in such a complicated manner that a younger reader attracted to such a book would have a hard time following The Secret of Ka.

The characters are also inconsistent and unbelievable at times regarding their erratic behavior and seemingly magical relationship to one another. The ending is especially odd, with twists and turns that leave the reader bewildered and somewhat disenchanted.

The Secret of Ka has its strong points in its incorporation of interesting mythology and a somewhat unusual story line, but unfortunately it never develops these fully enough to make up for its flaws. Readers may find it hard to finish. Those that do may be disappointed with the odd and unlikely ending.