The Secret Intensity of Everyday Life 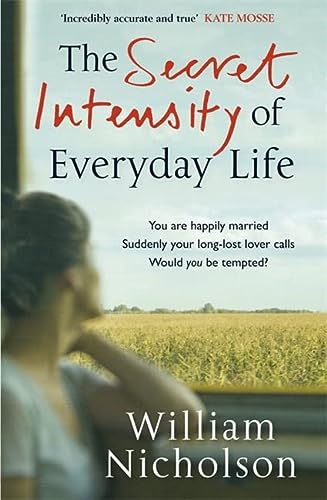 An arrogant talking head has just humiliated his well-meaning director, Henry, in front of his crew. Henry is an almost brilliant documentarian who will never fulfill his life’s ambition of making it in front of the camera. The talking head storms off the set to get his hair fixed before the next shot. An attractive female crew member touches Henry’s arm, makes light of the temperamental talking head, and says, “And you could do his job better than him, too.” Henry is restored. The narrator comments:

"So this is what it is all for? A woman’s smile. A woman’s admiration. Ugly little Picasso painting women into his bed. All the arts are a form of seduction. We shine, we shine, cheating the flowers to open their petals to our little suns. Even the married men. Most of all, the married men.”

William Nicholson’s The Secret Intensity of Everyday Life is a book devoted to moments like this. It is an exploration of the gnawing discontents in the lives of generally successful people and a confession to the little sins we commit every day.

Set in the comfortable London suburb of Edenfield, Nicholson presents us with a dozen or so characters like Henry. For example, there is Allan Strachan—a schoolteacher who will never fulfill his life’s ambition of being playwright. The women of Edenfield face their own quiet demons, too. There is, Laura, Henry’s wife, waffling over re-engaging with a long-lost lover; and Elizabeth, a single mother managing a difficult life by denying herself all indulgences, except a periodic tryst with the irredeemably shallow father of her daughter.

Nicholson also brings us to Edenfield’s primary school, where we meet Henry and Laura’s son and daughter, both a half-step out-of-step with their peers. Even Lord Edenfield wrestles with a daunting bargain: selling off his family’s ancient book collection to offset the family’s gradually withering endowment."

The people of Edenfield have smoldering discontents and unfolding moral dilemmas—not crises. In some ways, The Secret Intensity of Everyday Life has that Seinfeldian quality of being a book about nothing. But while the quirky and flawed people of Nicholson’s Edenfield might, at first blush, remind readers of neurotics who inhabit “Seinfeld’s” New York City, there are few laughs in Nicholson’s universe. Even the book’s happy ending is only half-redemption, as main characters, Henry and Laura, decide that they are “happy enough” to stay with each other, rather than just “happy.”

The Secret Intensity of Everyday Life contains several poignant and unnerving moments. The detailed narration of Allan Strachan’s masturbatory climax from a telephone sex-line is both powerful and slightly nauseating. The subplot built around the school boys admiring and tormenting Edenfield’s token yokel, the Dogman, is both dead-on accurate and depressing in its portrayal of pre-teen boys. Allan Strachan’s next-door neighbor, Marion, spends her idle days plotting the seduction of youthful Allan, as she slips unnoticed into insanity—a twenty-first century Eleanor Rigby. Nicholson is meticulous in narrating her smoldering lust for a younger man and the parallel life Marion lives inside her head to compensate for an unfulfilled real life.

And herein is the book’s great flaw. The Secret Intensity of Everyday Life is a 350-page underture to the lives of unfulfilled people—a smorgasbord of petite melancholy. A few more laughs and an uncomplicated good deed would create a more balanced book. (The village rector, Miles, appears to be the only Good Samaritan, but he’s a self-loathing atheist living a lie.) Somewhere in Edenfield there must be a happy person void of existential dilemma.

Even in today’s cynical, over-heated world, they still exist. While skillfully written, intelligent, and insightful, The Secret Intensity of Everyday Life needs a few glimmers of sunlight amidst the cloud-cover; without it, the book is a chore.