The Secret History of Jane Eyre: How Charlotte Brontë Wrote Her Masterpiece 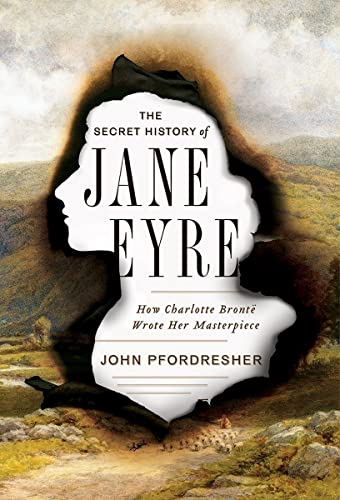 Ever since it was first published in England in 1847 and in the U.S. in 1848, Jane Eyre has been a literary phenomenon, widely read, profoundly influential, and lovingly imitated. (See for example, Daphne du Maurier’s Rebecca).

Indeed, few mid-19th century British novels have touched the hearts and minds of those who love literature as much as Jane Eyre. That might be because readers have long hoped, expected, and perhaps even believed that when they read it they were getting the truth and not make-believe. On the title page of the first British edition Jane Eyre was described as “An Autobiography” that was “Edited by Currer Bell.”

In The Secret History of Jane Eyre, Professor John Pfordresher takes that information at face value and insists on the autobiographical elements in Charlotte Brontë’s big, bold gothic novel. Like a detective, he tries to track down every truth and every fact behind the fiction. He also harps on the author’s want and need for what he calls “secrecy.”

Pfordresher backs up his argument with letters from Charlotte, the oldest of the three sisters who made the writing of novels the family business. In one letter, she expressed her desire for the “sheltering shadow of an incognito.” She added, “I seem to dread the advertisements.”

In another letter, she described her “ostrich-longing for concealment.” Charlotte’s desire for an incognito also seems to have been a desire for privacy, rather than secrecy, and a wish to avoid the commercialism of the book trade that was then booming in London. Indeed, if she was in hiding, she was hiding in plain sight.

Soon after Jane Eyre was published it was known far and wide that Charlotte Brontë was its author. Ironically, the masks she wore only made readers increasingly curious about the real identity of the author.

Pfordresher might have aimed for more subtlety and a more nuanced approach. Still, one doesn’t have to accept his thesis that Jane Eyre is a “richly autobiographical novel” to enjoy his lively critical study. Indeed, he makes a strong and persuasive case for Charlotte’s “divided self” and her creative use of her own wild imagination.

He offers a quotation from a letter she wrote to Hartley Coleridge, the son of Samuel Taylor Coleridge, the preeminent romantic aesthetician, who touted the virtues of the imagination above all other human facilities—a radical notion at the start of the 19th century.

Charlotte seems to have endorsed and embraced Samuel Taylor Coleridge’s sensibility when she told his son, Hartley, that the “imagination is a strong, restless faculty which claims to be heard and exercised.” Pfordresher points out that for Charlotte the imagination was a “she” not a he; a feminine not a masculine principle. That makes sense. After all, her fictional world features strong women characters and was aimed at women readers.

Pfordresher also points out a key passage in which Mr. Rochester, the novel’s Byronic hero, tells Jane, “hand me my whip.” And she “promptly obeys.” For a Victorian novel, it offers some kinky stuff. Charlotte had some kinky ideas, as her writing shows.

The Secret History of Jane Eyre traces her divided sensibilities that go from kinky to conservative. On the one hand, she was bound by tradition. On the other hand, she was a rebel. In 1847 at the age of 31, she wrote to her friend, Ellen Nussey, that society struck her as a “very strange, complicated affair” in which “Nature is turned upside down.” She added, “your well-bred people see everything the wrong way up—a lie is with them truth.”

If Charlotte longed for an incognito presence as Pfordresher argues it might have been for self-protection from those well-bred people and from the patriarchs of British society. In 1836, she wrote a letter to the British poet laureate, Robert Southey, in which she shared her desire to be a writer and enclosed two of her own poems. Southey scolded her.

“Literature cannot be the business of a woman’s life & it ought not to be,” he wrote. Fortunately, she didn’t listen to him.

Pfordresher shows that Charlotte went against the grain and that her imagination took her into very dark places, indeed. Accordingly, he takes readers into the very heart of her darkness.

He also does an admirable job of painting a group portrait of the Brontë tribe that surrounded Charlotte: father Patrick, an Irish-born curate and a rough taskmaster; brother Patrick, a failed artist who turned to drink and opium; and her two sisters, Emily and Anne, who also went against the grain and wrote under pseudonyms.

Maria Brontë, the wife and mother, died in 1821. All three of her daughters were literary geniuses, though they were not recognized as such by the leading male critics of the day. (William Makepeace Thackeray was an exception).

Matthew Arnold, the author of Culture and Anarchy who loved order above all else, complained that Charlotte’s mind was filled with “nothing but hunger, rebellion and rage.” In his mind she was a pure anarchist.

The Secret History of Jane Eyre shows that she had good reasons to be hungry, rebellious and full of rage. Still, she also loved culture, order, beauty, and truth. Pfordresher makes Charlotte into a complex figure who sometimes seems as much a fiction as the characters she created: very much an individual of her time and place and yet way beyond them, too.

Pfordresher does not mention her near contemporary, Emily Dickinson, the 19th century New England poet with whom she shares common ground. Both had divided selves, both lived hidden lives, and both disobeyed the patriarchy. Still, unlike Charlotte Brontë, Emily Dickinson never married and apparently never enjoyed a sexual relationship with another person. Charlotte did both and died in 1855 as a result of an illness associated with her pregnancy. To the end, she lived to the fullest.

At the end of his deeply moving book, Pfordresher provides a quotation from the British writer and groundbreaking intellectual, Harriet Martineau, who visited Charlotte and called her “a frail little creature who had done such wonderful things.” At a time when men didn’t appreciate her, women writers like Elizabeth Gaskell and Harriet Martineau recognized her genius. Professor Pfordresher joins the crowd of admirers just in time for the 170th anniversary of the publication of her classic.

His book might well send fans of the Brontës back to Emily’s Wuthering Heights and Charlotte’s four novels: The Professor, Shirley, Villette, and Jane Eyre, the book that went boldly into the world and altered the writing of literature.