Secret City: The Hidden History of Gay Washington, from FDR through Clinton 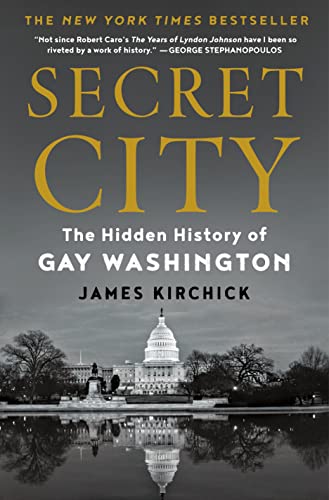 “Secret City is a lengthy, detailed, riveting history of the way in which homosexuality was perceived and treated in our government from the tenure of Franklin D. Roosevelt to the end of the 20th century.”

James Kirchick’s Washington is not the city but the federal government, which, of course, dominates that metropolis on the Potomac. Genny Beemyn’s A Queer Capital: A History of Gay Life in Washington, D.C. offers a more comprehensive history of gay life in that city. While Kirchick calls his book Secret City, the stories it contains are more about exposure than about hiding. Secret City is a lengthy, detailed, riveting history of the way in which homosexuality was perceived and treated in our government from the tenure of Franklin D. Roosevelt to the end of the 20th century. The book, divided into sections by president from Franklin Roosevelt to Bill Clinton, is comprised of stories of able public servants and well-known power brokers who lost their positions because of exposure of their homosexuality.

Kirchick begins with the saga of Sumner Welles, a close friend of Franklin Roosevelt as well as his Undersecretary of State. After Welles was caught drunkenly propositioning Black porters on a train, diplomat William Bullitt, bitter over being passed over for the job Welles received, began a campaign to have him removed from government because of his homosexual activity. Bullitt’s henchman was his openly gay (rare at the time), assistant, Carmel Offie. Roosevelt did all he could to protect his friend and greatly resented Bullitt’s campaign to destroy him, but Welles eventually had to resign.

By the beginning of World War II, homosexuality had become connected to treason—it was thought that a homosexual’s loyalty would always be suspect, and, because of blackmail or bitterness, he was likely to become a spy. Though Foreign Service had been an attractive field for privileged gay men, they were now seen as security risks. This stereotype would become even more potent during the Cold War. The great irony of the Sumner Welles story is that one homosexual was being used to engineer the downfall of another. At a time when homosexuality was a shameful secret, there was no sense of loyalty or membership in a gay community. Eventually, Carmel Offie also was sacrificed.

Among the supporting cast of the Sumner Welles story are prominent journalists, particularly Drew Pearson, a power in the press and on radio, and, of course, J. Edgar Hoover, the ruthless head of the Federal Bureau of Investigation. Hoover’s own sexual orientation was a subject of gossip and conjecture, but he was too powerful to be vulnerable.

Much of the volume is devoted to the period of the Lavender Scare during the presidencies of Truman and Eisenhower, when hundreds of gay government workers were purged from their positions. The section begins with former Communist and Time Magazine reporter Whittaker Chambers testifying at the spy trial of State Department official Alger Hiss. While Hiss’s crime was ostensibly treason, there was what Minchick calls a subplot of homosexual passion and betrayal. Chambers had a homosexual past, but there was no foundation to Hiss’s supporters’ claims that it was sexual jealousy and bitterness that led Chambers to accuse Hiss. While Hiss was found guilty, Chambers was forever branded as the deceitful homosexual traitor, an archetype that would dominate discourse about homosexuals in government for over a decade.

Communist and homosexual became equated, and any gay government worker was a security risk. Homosexual activity had to be secret, so homosexuals were always vulnerable to blackmail. Senator Joseph McCarthy’s campaign against Communists in the civil service and military was also a campaign against homosexuals. Somehow McCarthy’s gay henchman Roy Cohn managed to survive all the rumors and innuendo until AIDS brought him down in the 1980s.

Possible security risks were brought to the attention of the FBI, which leads to another dimension of Kirchick’s story. Most of the highly placed government officials were men from privileged backgrounds with Ivy League educations. The politicians who led witch hunts and the government agents who did the investigations often saw homosexuality as an aberration of people from the higher ranks of society. Homosexuality was an affliction of the effete.

Presidents seemed less bothered by homosexuals in their midst than senators and congressman. Franklin D. Roosevelt tried to protect Sumner Welles. John F. Kennedy had many gay friends. Lyndon Johnson’s closest aides, Bob Waldron and Walter Jenkins, were homosexual. Political reality forced Johnson to expel them from his inner circle. Nancy Reagan was surrounded by a coterie of homosexuals. Only Richard Nixon was an obsessive homophobe.

The government’s mistreatment of gay men was aided and abetted by ruthless journalists like Drew Pearson and Jack Anderson and the mean-spirited, arch-conservative founder of the National Review, William Buckley. Washington’s newspapers were totally in support of the mistreatment of homosexuals at the hands of the police and the FBI.

Kirchick counters his stories of exposure and ruin with the more positive story of Frank Kameny, a government astronomer who was unwilling to stay in the closet or let his dismissal go unchallenged. Kameny became a gay activist and became an example to other men who refused to be victimized by a hypocritical, unjust system. Kameny began with a handful of members in his Mattachine Society, but it was the beginning of a movement that would slowly expand. As the LGBTQ community became larger and more visible, businesses developed to serve its members. Eventually Washington had a gay bookstore, Lambda Rising, a gay newspaper, and a number of bars and nightclubs, but caution remained the watchword for most of the 20th century.

At close to 700 pages of text and another 125 pages of notes, Secret City, is grand in scope and always absorbing.  Its focus is always on individual stories of men caught in the crossfire between their sexual orientation and official homophobia and hypocrisy. It was only by asserting themselves and seeing themselves as a community that they found a place for themselves in the seat of American power. Kirchick’s clear, journalistic style carries the reader along. Above all, he asserts, gay men have always been in places of power, but always vulnerable. Their positions depended on the ignorance or loyalty of the people around them. Unfortunately, that wasn’t enough to protect them.