The Second-Worst Restaurant in France: A Paul Stuart Novel (2) 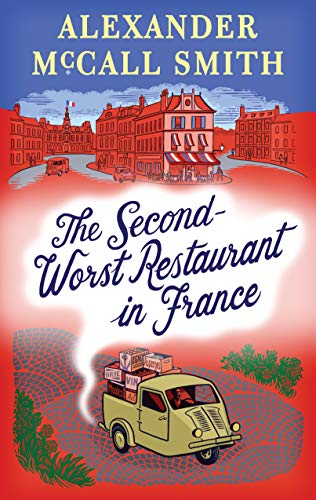 “In The Second-Worst Restaurant in France, Alexander McCall Smith allows his characters to advance the story with wit amid the simplicity of ordinary life; this is the magic of his charming storytelling talent.”

The Second-Worst Restaurant in France is the sequel in the Paul Stuart series by author Alexander McCall Smith, the first being My Italian Bulldozer. The story opens with Paul Stuart, “well-known food writer and celebrated cook,” asking himself the question “Should I go to France? Should I call Chloe right now and tell her: no France?” From here, the reader is guided through the hurdles of Paul’s daily life as he attempts to finish his most recent book, The Philosophy of Food. Things get out of control when Paul’s part-time live-in girlfriend and editor, Gloria, brings her two Siamese cats Hamish and Mrs. Macdonald to his flat for a visit.

“Paul was aware of something rubbing against his legs. Looking down, he saw Mrs. Macdonald, pressing against him, her back arched, her eyes looking up at him in guileless innocence.

“See!” exclaimed Gloria. “Mrs. Macdonald is showing her approval. That’s the way cats greet people they like. She’s transferring cat pheromones to your trousers. It’s the biggest compliment a cat can pay.”

Paul looked down. Mrs. Macdonald was staring at him, as if challenging him to contradict what Gloria had said. “I’m not too sure about having cat pheromones on my trousers,” he muttered.

While Paul wrestles with writing, Hamish and Mrs. Macdonald demand his constant attention, “yowling in their voluble Siamese voices until he yielded.” Enter his distant cousin Chloe, who offers him a room in one of her empty flats where he can work. This arrangement is short lived, after an intimate moment with an olive and a 23-year-old woman cause unwanted chaos in Paul’s life.

Paul accepts Chloe’s offer to join her for a vacation at a small village in France where she has rented a house for a few months. In France, Paul believes he will be undisturbed and able to complete his book by the deadline.

Once Paul is situated, McCall Smith introduces readers to the ordinary inhabitants and the aptly nicknamed second-worst restaurant in France. While this story revolves around a mild plot, the elegance lies in relationships. For example, there’s Paul’s relationship to food, how the mention of a dish sparks a memory, such as the following paragraph regarding Chicken Kiev.

“But then he remembered something else. Somewhere in his scribbled notes was a reference to the Pozharsky cutlet, a fried chicken dish associated with the Pozharsky family of innkeepers. French chefs took this cutlet from the Russians, rather than the other way around—or so the Russians claimed. This, they argued, was the precursor of Chicken Kiev.”

There’s also the villagers and their relationship to food. The location is France, after all, so yes, there are baguettes and croissants involved. The local bakery is bursting with customers exchanging comments and theories. The first time Paul steps inside the bakery to purchase what will become his daily bag of croissants, the topic of the village restaurant is discussed openly and without hesitation.

“Not everyone likes our restaurant, M André. I don’t think we should boast about it.”

Paul’s insight into the young man, Hugo, who dreams of taking over as chef from his boss and uncle, Claude, is beautifully stated. “. . . people must be guided in a particular direction, they should not be forced. There was a fragility about Hugo that meant that he needed encouragement. Claude had thought, perhaps, that this fragility might be buttressed by exposure to male outdoor pursuits; but he was wrong. It needed something far subtler than that.”

Woven in and out of chapters with prodding from Paul are the backstories of Chloe’s five husbands. These snippets reveal her somewhat bohemian, caring, flamboyant, and flirtatious, personality. “He had the most beautiful surname, Gigliodoro, which means golden lily in English. And he was you know—he really was. We talk about gilding the lily when you try to adorn something that is already quite ornate enough, but I rather like the idea of a gilded lily, and believe me, Antonio was that, oh, my goodness.”

In the final chapters, the intriguing part of Chloe’s life, which she has kept a secret from family and friends, is revealed. The following piece of dialogue she has with Paul sums her up beautifully.

“Remember one thing,” said Chloe. “The human heart has many chambers.”

“What do you mean by that?” asked Paul.

“Exactly what I said,” replied Chloe. And then she added, “Be kind to her, Paul.”

In The Second-Worst Restaurant in France, Alexander McCall Smith allows his characters to advance the story with wit amid the simplicity of ordinary life; this is the magic of his charming storytelling talent.