The Second Sleep: A novel 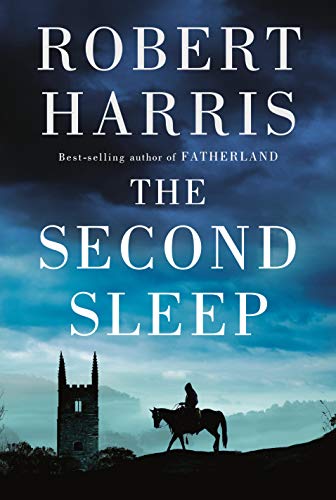 “The Second Sleep by Robert Harris is highly recommended for those who demand complexity, eloquence, and questions that disturb one’s sleep.”

Robert Harris once again demonstrates how satisfying a historical mystery novel can be when written by a literate man with a firm grasp of history, the human condition, and the search for religious truth versus indoctrination.

The second sleep referred to in the title of Harris’s thought-provoking novel is the second interval of sleep after waking after midnight. In this novel the phrase may also be a metaphor referring to a time to reflect on whether long-accepted beliefs can have validity while at the same time constituting walls to withhold rational thought.

Reconciling the two, belief and rational thought, creates a crisis of faith for Father Christopher Fairfax, a young English priest sent to the isolated village of Addicott St. George to conduct the funeral services for the local priest.

Christopher is none too happy about the assignment given him by the Bishop of Exeter. “To send a man off thirty miles to the furthest edge of the diocese, on such an errand, and on a clapped-out horse . . .”

The village of Addicott St. George, pronounced by the locals as “Adcut,” is a small collection of thatched roofed, whitewashed cottages centered around a stone church that Christopher “guessed must have stood square on this land for at least a thousand years; more likely fifteen hundred.”

To Christopher, the old church is a statement that the Catholic faith has a strong grip on Adcut in this year of Our Lord, 1468.

Christopher greets the old priest’s housekeeper, Mrs. Agnes Budd, who leads him to a cold bedchamber where Father Thomas Lacy lies in his coffin in a white linen shroud, with a handkerchief covering his face. When Christopher uncovers Father Lacy’s face he is shocked.

Christopher has seen many corpses, whether in hanging cages, the homeless lying dead in doorways, or dead of the fever that recently swept England, but Father Lacy’s lifeless face is unlike any he has seen.

The old priest has a broken nose, bruised eyes, a gash across the forehead, and a mangled ear. He has also been dead a week and has a stench that drives Christopher back from the body. “The old priest ought to have been in his grave some while ago.”

Mrs. Budd tells Christopher that poor Father Lacy sustained his wounds when he fell while taking a walk, a fall of a hundred feet or more according to those who found the body.

Mrs. Budd tells Christopher that Father Lacy had been the village priest for 32 years, but no local pastor would conduct his funeral because “Father Lacy had no dealings with parson in t’other valleys. . . . He went his own way.”

Christopher doesn’t understand. There is only one way according to his beliefs. “All else is heresy.”

After finishing a eulogy for the old priest, Christopher adjourns to the parsonage study to sleep. There he discovers Father Lacy’s large library of what looks to be at least a hundred books. Many were about Revelations, a gloomy subject to study in Christopher’s opinion.

Among the books he finds several declared heretical by the Church, forbidden to be read by either priest or layman. The Proceedings and Papers of the Society of Antiquaries occupies one shelf. The Society has long been declared heretical, its officers imprisoned, and the books confiscated and burned. The present volumes may be the only copies still extant.

Father Lacy was a heretic. Could he even be buried in consecrated ground? Should he return to Exeter to consult with the bishop?

“He considered the matter carefully. He was a practical young man. Not for him the fanaticism of some of his fellow younger clergy, with their straggling hair and beard and their wild eyes, who could sniff out blasphemy as keenly as a water hound unearths truffles.”

Christopher decides to pretend he doesn’t know, and “will his square his conscience with God and the bishop at a later date.”

A further search of the study turns up forbidden antiquities, including one of the plastic devices the ancients used to communicate. “On the back was the ultimate symbol of the ancients’ hubris and blasphemy—an apple with a bit taken out of it.”

This revelation and Christopher’s reflections on what England was like before the Apocalypse reveals that the novel will contrast the past and present, as well the conflict between faith and rational thought. What one at first believes is a straightforward historical mystery featuring a priest evolves into something much more complicated and thought-provoking.

Harris’s characters are realistic to the point most readers will recognize them as resembling persons they know while at the same time very different. From Mrs. Budd’s mute niece, Rose, to the Lady Durston, a woman with both looks and intellect who knew Father Lacy well, to ruddy-faced Captain Hancock who wanted to marry the widow Lady Dunstan—all are three-dimensional and psychologically complex.

At Father Lacy’s funeral one learns that after the Apocalypse and its rejection of scientism, the Church had purged the English language of heretical prose and returned the worship of service to the language of the King James Bible. Whether Harris intends to draw an analogy or not, the purging proves that political correctness is not a modern concept.

As Christopher with Lady Durston’s help searches for the truth of the Apocalypse, he does so in a setting eloquently described by Harris in language easily understood without resorting to a dictionary, but that evokes vivid images. Such a gift for descriptive narrative is not as common as one would wish.

The blend of past and present with its revelation of the collapse of technology, religious self-reflection, and a slowly unfolding love story creates a satisfying story that lingers on the mind long past the time one puts the book away.

While some might find the almost science fiction elements in the plot, and the portrait of a rigid religious establishment, one cannot deny that Christopher’s crisis of faith is real, and is likely mirrored by a friend or relative.

The Second Sleep by Robert Harris is highly recommended for those who demand complexity, eloquence, and questions that disturb one’s sleep.