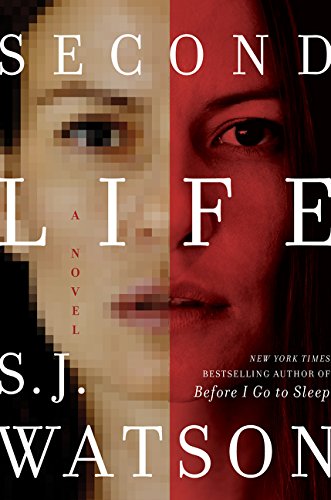 “Kudos to Mr. Watson. Second Life is an excellent novel that is highly recommended to fans of psychological suspense.”

A real page turner of a psychological suspense, Second Life by S. J. Watson chronicles the life of a woman whose life unravels in an unexpected and harrowing fashion.

Julia has it all: fashionable home; a part-time career as a professional photographer; a successful husband who loves her; and a teenage son. Julia also has secrets and guilt left over from her previous life. A recovering alcoholic and former drug addict who left Marcus, her first love and the model of her most famous photograph, dead of a drug overdose in a squalid Berlin apartment, Julia still feels guilty over fleeing back to London. “I’m sorry for following him to Berlin, and for leaving him there, alone in that photograph, and for not being the person he thought I was.”

Julia owes her second life to Hugh, an old family friend and now her husband. He helped her escape Berlin, arranged for her rehab from alcohol and drugs, then married her. “I’ve got you. Keeping me safe,” she tells Hugh. Julia doesn’t admit to herself, if she even realizes it, that gratitude isn’t the same thing as love, and keeping safe is something you must do for yourself.

Julia’s life begins unraveling when she returns home to find the police waiting. Julia’s younger sister, Kate, was murdered in a Paris alley. “All I can think of is my baby sister, lying in a Parisian alleyway, rain-soaked and alone.”

Julia is drowning in guilt. After their mother’s death, Julia had taken care of Kate and protected her from their father and his so-called friends. “Kate and I felt like unwelcome reminders of his past, and though he kept the drugs away from us and told us he loved us, he was neither inclined nor able to be a parent, and so it’d fallen to me to look after us both.”

When Kate is thirteen and in school, Julia goes to Berlin with Marcus, telling herself that Kate is old enough to after herself. Julia is not old enough. She becomes pregnant and gives birth to Connor, the son that Hugh and Julia adopt. But recently, after years, Kate wants Connor back. “And she thinks Hugh and I are stopping her for our own selfish reasons,” she tells her friend, Adrienne. Neither of them understand why Kate has suddenly changed her mind.

Julia meets Kate’s flat mate, Anna, at Kate’s funeral, and is shocked to learn that her sister had been meeting men online at various dating sites. She is certain that a man met online, then in person, is her murderer. With Anna’s help Julia logs on to a chat room that Kate frequented. “I just want to see if there’s anything the police might’ve missed.”

Julia chats with various men under the name of Jayne, certain that a false name will keep her real identity a secret and she can safely investigate Kate’s murder. She suspects first one man, then another, but has no way to know who is lying and who is not. When Hugh tells her he has talked to the Paris police and Kate’s murderer has been arrested, the news doesn’t cause Julia to delete her profile and abandon her Internet activity.

Julia has met Lukas online and is attracted to him. Although he is younger than she, he seems to understand her so well. She is now as addicted to the Internet chat room as she is to alcohol. “Deep down, but unmistakably there, there’s a weak throb of excitement.”

Julia lives for the time she chats with Lukas. Believing her identity still a secret, she agrees to meet him at a hotel in London where they end up in bed together. “My betrayal has been gradual but inexorable, the sweep of the hand on a clock, and it’s led me here, to this afternoon . . . I realize how stupid I’ve been. All along, from the very beginning, this is what it’s been about.”

If Julia is wearing the mask of a false identity, Lukas is no less duplicitous.  When he first hits Julia hard enough to cause bruises, she is shocked. Then she learns that not only has he learned her real name, but he also knows about Hugh and Connor. What is more terrifying is that she learns Lukas is stalking Connor. She breaks it off with Lukas, finally realizing that she has risked her marriage and her son’s safety for “a nasty piece of work.”

It is one thing to break up with a man, but quite another situation if he doesn’t want to end the relationship. When Connor disappears, Julia knows it has always been about her son.

Mr. Watson is a master at creating suspense and increasing a sense of foreboding. Instead of a geographical sense of place, he evokes a sense of a personality. Although the book is set in London, it could just as easily be any large city. What is unique is Julia’s mind, not her physical environment. The story ends in a shocking twist that is unexpected and horrifying. Kudos to Mr. Watson. Second Life is an excellent novel that is highly recommended to fans of psychological suspense.