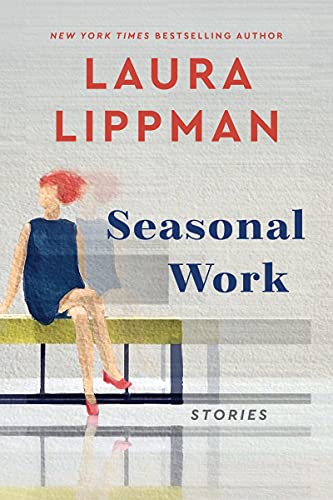 “demonstrates the power of storytelling in our everyday lives and how it might be a good idea to listen more carefully to the stories that others are telling us.”

With an effortless and unassuming style, Laura Lippman slips readers into a story like a master magician. Her prose is simple and beguiling. She shape-shifts into her characters’ heads with ease.

“The photographer said she needed everyone to stand next to the minivan. I tried to get out of it. I’m fourteen now, although I look younger, and I didn’t want my picture in the paper.”

Those are the opening sentences of the opening and titular story, “Seasonal Work.” Why the minivan? Why is there a possibility of news coverage? What’s going on?

Who wouldn’t want to read more?

“I don’t remember the date. Later, lawyers tried to make hay out of that fact, as if it proved by behavior was ‘chronic,’ indicating a ‘pattern of privilege.’ But it was the opposite.”

That’s the swift opener of the ultra-juicy, and timely, “Snowflake Time.” What chronic behavior? What “hay” are the lawyers making? Is this guy privileged or not?

“They called them black beans, although no one in the Waco Times newsroom could explain the origin of the term. They were just ‘Lou’s Black Bean,’ dreaded equally by one and all. They appeared in the form of memos typed on scanner paper, the coded sheets that were threaded through IBM Selectrics when there were not enough computers to go around—and there were never enough computers, not in the crunch of afternoon deadline, not when one was the low woman on the totem pole.”

Those are the opening moments to “Waco 1982,” and we are immediately immersed in interpersonal politics of a newsroom, following a young reporter finding her way and trying to get her feet on the ground with an uncertain career.

That sense of “grounding” is pervasive. Lippman’s characters inhabit real neighborhoods, know their social status, and are keenly aware of both real and imaginary borders to their turf. More often than not, we’re in Baltimore (where Lippman has set the vast majority of her two-dozen novels, half of them mysteries featuring Tess Monaghan). False fronts are a common theme. Social status often plays a key role. Lippman prefers her protagonists regular and relatable.

Most of the dozen stories in Seasonal Work are previously published (some as early as 2007) in various anthologies and online literary sites. Reading them within one hardcover spine showcases Lippman’s tremendous—but always unforced—range.

In “The Last of Sheila Locke-Holmes,” we meet young Sheila Locke-Weiner with a tasty opening line: “Year later, when relatives tried to tease her about the summer she turned eleven and opened her own detective agency, she always changed the subject.” We are soon deeply inside a daughter’s attempt to understand her father’s secret past.

In “Slow Burner,” one of the best entries here, high school teacher Liz renews her careful watch on husband Phil when she discovers revealing texts between him and a lover on a secret second phone. This isn’t Liz and Phil’s first go-round with his infidelity. Lippman steeps us in Liz’s self-analysis, lulls us into thinking Liz is merely the observer of her own marital predicament. “They go back to therapy. Liz literally doesn’t know what to say. She has been spying on Phil for so long, it’s hard to remember what she might know and what she can’t know. She isn’t temperamentally suited to this level of deception.” Liz is smart enough to see parallels with Greek mythology, one of the subjects she teaches. Liz sees hidden meanings in the texts that Phil does not. We are so deeply invested in Liz’s point of view, looking at the marriage with dispassion, that we fail to imagine the possibility that Liz might act. The title of this story takes on double or triple meaning as Liz realizes it’s impossible to live with a man who gets everything he wants.

The final entry here, “Just One More,” is the only story written specifically for this collection. Lippman keeps us tantalized by an unusual (but entirely plausible) game between a husband and wife testing their love. “Just One More” ponders the space between online avatars and real-world humans and their real-world needs. Lippman flashes a nifty sleight of hand. You think you know where to look, but you probably do not.

Like much of Seasonal Work, “Just One More” demonstrates the power of storytelling in our everyday lives and how it might be a good idea to listen more carefully to the stories that others are telling us.