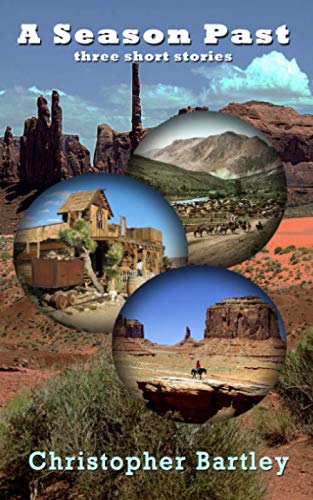 “In three striking pieces, A Season Past gives us three different men who ventured into that world of inhumanity and shows us their hard journeys home.”

The Wasatch Mountains in 1898. The tiny town of Monahans, west of Odessa, in 1945. And the Kasha-Katuwe Tent Rocks National Monument in 2009.

A Season Past serves up two novellas and one short story—all about former soldiers who struggle to settle back into civilian life after going to war on behalf of their government. Written with a cool style—in spots as noir and stark as Christopher Bartley’s series of novels about outlaw-with-a-conscience Ross Duncan—the impact of volume is a gut-punch.

The writing is as clear-eyed as Kevin Powers (The Yellow Birds). The weight of the psychological trauma is as vivid as Tim O’Brien (Going After Cacciato), minus the fever dreams. A Season Past is written with a stark and matter-of-fact style (although there are hallucinations) and it underscores how those of us who haven’t been to war have so little understanding of what it really means to be there.

The title story starts things off in Utah in the late 19th century in the “shimmering orange tints” of the Wasatch peaks. His name is Coltrane. He is 54. After years of prospecting in the Klondike, he wants to return to Utah and live out his years in “quiet obscurity.”

It’s not going to happen. Coltrane has a past. It’s coming to get him. Coltrane is tormented over things he did during the Civil War. Coltrane fought with the Stonewall Brigade, for the south, and knows he was only considered a hero because he survived. He sees a ghost. He relives the brutality. He suffers over some of the choices he made during battle. Now Coltrane wants to stay put in one spot and read.

In town picking up supplies, Coltrane meets and soon befriends a young woman. Elisabeth makes Coltrane feel like he stepped out from of a “frozen soulless place.” But she is due to be married. And Coltrane has a woman back east, too.

In town, Coltrane gets in the middle of a shootout. There are questions about his past entanglements, including incidents when Coltrane served as a Federal marshal. Was every shooting justified? Was it always self-defense? The town fears Coltrane. Local law enforcement can’t deal with the idea of a man who is working the land and taking care of himself.

Coltrane’s ghost attempts to counsel a new path away from violence but the past is coming. The sense of dread is real.

In the next story, “The Cold Ardennes,” an unnamed narrator recounts his arrival home on a Greyhound bus in the “heat-crackled territory” of west Texas after World War II. “There was nobody there to greet me. Nobody knew I was coming home. I wasn’t even sure myself who was left. Sally had long since broken things off. Johnny was probably still in jail; and my brother had fallen with a lot of other Marines on some Pacific island I didn’t even know how to pronounce.”

Jobs are few. Friends are fewer. The town knows of the narrator’s time in war, but there are no parades. A free beer means “thanks.” There is time to stare at the ceiling. The young man’s shooting skills, developed as a sniper in war, are recruited to assist a man named Hackett with a nefarious scheme. It’s a job. It’s something to do.

As a kind of quick coda (13 pages), “Those Apache Tears” is a quaint, bucolic palate-cleanser. The story involves a conversation between a Tent Rocks park ranger and a couple of visitors—Jimmy and his wife Lisle. The story touches on the brutality against Native Americans, the Vietnam War, how soldiers were treated upon return, and how veterans live with a “dark world” they have no way to share. It’s also about the power of stable, loving relationships and the simple power of conversation. The park ranger’s layered story of his own journey in and out of war, coupled with his calm perspective about what he endured and what he’s looking forward to, make for a contemplative close to this fine trilogy of moving stories.

In The Things They Carried, Tim O’Brien wrote: ““Together we understood what terror was: you're not human anymore. You're a shadow. You slip out of your own skin, like molting, shedding your own history and your own future, leaving behind everything you ever were or wanted to believe in. You know you're about to die. And it's not a movie and you aren't a hero and all you can do is whimper and wait.”

In three striking pieces, A Season Past gives us three different men who ventured into that world of inhumanity and shows us their hard journeys home.